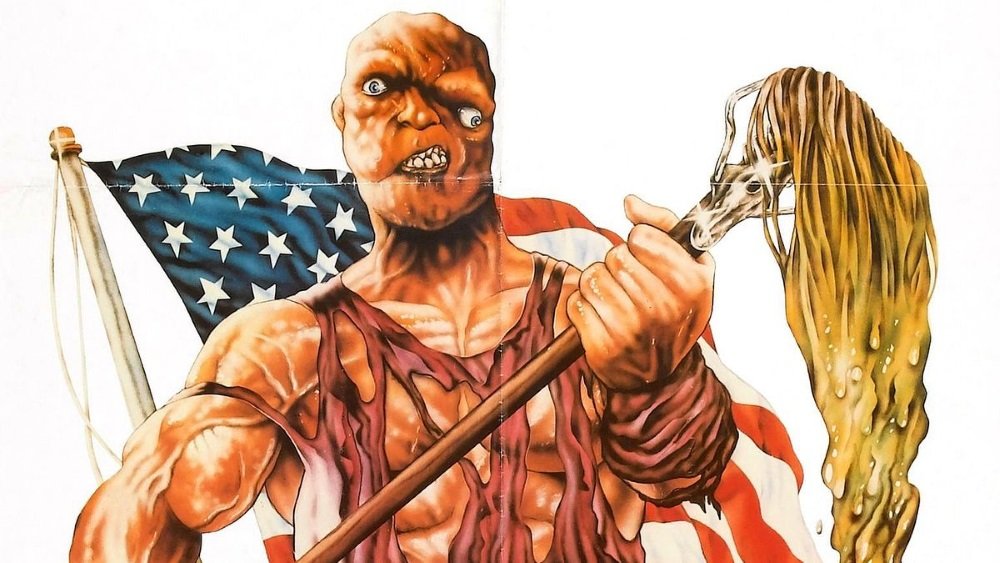 When a nerdy 98-pound-weakling health club janitor and all around nebbish (Mark Torgl) takes a dive into a vat of toxic waste, he transforms into the hideously deformed but amazingly buff Toxic Avenger (Mitchell Cohen), a putrid, pure-hearted mutant ogre in a tutu who declares war on polluters, bullies, and any bad guy who dares cross his path with his trusty mop and sheer brute force.

The Toxic Avenger (1986) is the poster boy of Troma Films, the New Jersey indie created by Z-movie mogul Lloyd Kaufman that has parlayed aggressive bad taste into a cult movie brand, and you need to love grungy, gooey, gross-out filmmaking to enjoy this film. Kaufman directs and sets the bar for his studio. The humor is not merely sophomoric and silly, it’s aggressively so, and the bargain basement gore effects are over-the-top and excessive. If you don’t find the sight of fakey dismembered limbs and gut-busting explosions of fake intestines funny, then this is certainly not the film for you. For the rest of us bad movie connoisseurs, this is part of the cannon: Not the best, but certainly one of the essentials.

It of course spawned sequels. The Toxic Avenger Part II (1989), which pits Toxie against the evil Apocalypse Inc. and sends him to Tokyo in search of his father, goes through the motions of the original film’s mix of inspired excess and knowing junkiness, but The Toxic Avenger Part III: The Last Temptation of Toxie (1989) is more inspired. A greedy multinational company Toxie by turning him into… a Yuppie! Consider this a populist morality play, Troma style, and it delivers everything you could want in a Toxic Troma joint: gore, sex, human waste, melting flesh, dumb humor, blunt absurdity, and a final showdown with the Prince of Darkness played out like a live action video game.

Citizen Toxie: The Toxic Avenger Part IV (2000) opens with the Diaper Mafia taking the Troma School For the Very Special hostage and the explosive aftermath sends Toxie to another dimension—the corrupt town of Amortville (yes, Troma backwards)—while the Noxious Offender takes his place and maims and/or kills practically the entire population of Tromaville. Once again aggressive bad taste is pushed to the limit and beyond: there’s diarrhea, Nazis, the KKK, dismembered limbs, gushing blood, and fetus wars as good and evil Toxie spawn battle it out in the womb. “I don’t think we’re in Tromaville anymore.”

For the most honest look ever made about at the making of a low budget movie, check out Apocalypse Soon: The Making of Citizen Toxie (2002), the warts and all Tromatic experience of shooting a Troma film: chaotic, cheap, always rushing to catch up. Unlike most “making of” films, this revels in the blame game, chronicling the screw-ups and shooting breakdowns and recording all the complaints along the way, most of them from Kaufman, who has personally helmed every single Toxic film in the series on a starvation budget with a crew of aspiring filmmakers who seem to be learning on the job.

, iTunes, GooglePlay and/or other services. Availability may vary by service.
The Toxic Avenger

The films are available individually or in box set, each containing all four films plus the making-of documentary, as well as lots of other supplements. Say what you will about Troma movie budget but they fill their DVD and Blu-ray releases with lots of goodies.