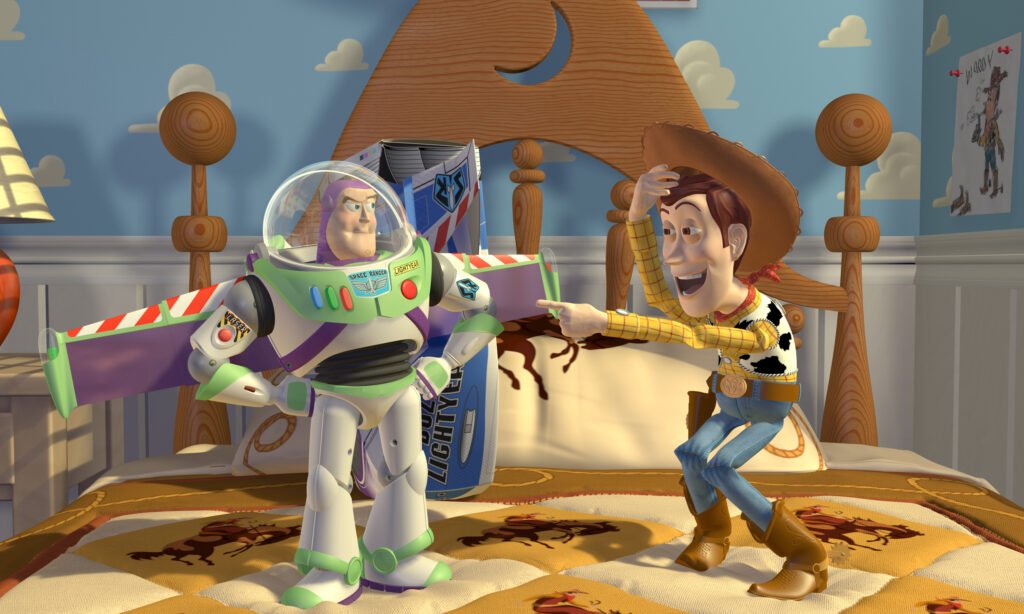 How many films can you name where the toys are more real than the people?

The stunning animation of Pixar and the strong direction of John Lassiter turned the first full-length computer animated feature into something much more than simply a bright, energetic hit family movie. Toy Story (1995) changed—for better and for worse—the landscape of animated filmmaking. But while Pixar pushed that state of the art to new levels, the key to their success is more than simply technical prowess.

Tom Hanks voices cowboy doll Woody, the trail boss of the toybox in Andy’s room, and Tim Allen voices the season’s hot new toy: tricked-out rocket man Buzz Lightyear. Only he doesn’t realize that he’s a toy, which only makes Woody all the more frustrated as the space-age action figure becomes the new playtime favorite.

Toy Story features a tight, inventive script that balances strongly etched characters with a tremendous sense of play, and brings it to life with vividly realized characters. They may just be toys, but the community created from the eccentric personalities is lively, sweet, and inviting, and the portrayal of toys and their kids is spot on. Lassiter and company bring a sense of childlike delight in the possibilities unleashed in play to the screen, while loading it with giddy in-jokes and spirited parodies for the grown-ups as well as for the kids.

It’s the feature directorial debut of Pixar founder John Lasseter. The technical bar has been raised much higher in the subsequent decades and the human characters look creepy and primitive by today’s standards, but the film is far more than a technical achievement. Its blockbuster success made CGI animation the new standard in big screen animation. For better and for worse, it signaled the end of the old school brand hand-drawn animation that Walt Disney Pictures mastered.

It was nominated for three Academy Awards, including best screenplay, and Lasseter was honored with a Special Achievement Oscar. The Oscar for animated feature wasn’t added until 2001.