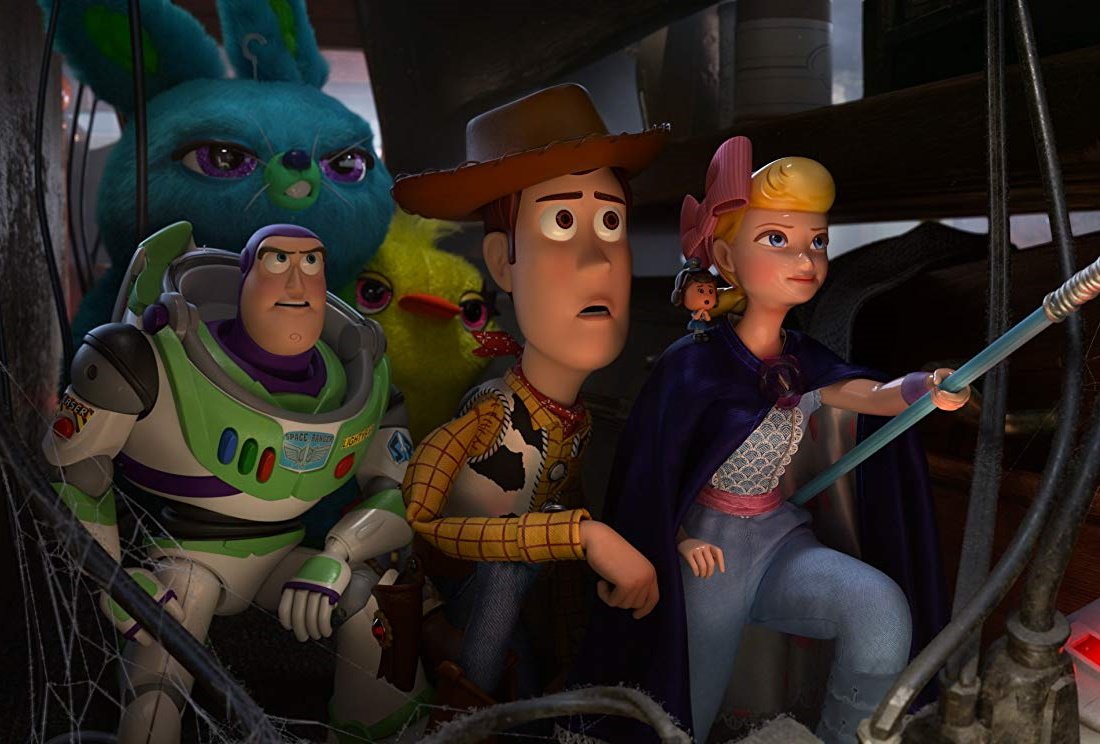 “Toy Story 4” (2019, G) reunites the toybox gang for a road trip with new friends. Tom Hanks, Tim Allen, Joan Cusack, and Annie Potts headline the returning voice cast and Tony Hale is Forky, an arts and crafts project made from a plastic spork who suffers from an identity crisis. Like the previous installments, it’s both funny and poignant and great for the whole family. It makes its streaming debut on Disney+.

Shia LaBeouf writes and stars in “Honey Boy” (2019, R), the drama of the stormy childhood of a child actor loosely based on his own life. Alma har’el directs the Amazon Prime Video original feature, which was nominated for four Film Independent Spirit awards.

Alison Brie plays an isolated, socially-awkward woman whose dreams start to bleed into her reality in “Horse Girl” (2020, R), a psychological drama that delves into issues of mental illness. The film from director Jeff Baeana and cowriter Brie comes direct to Netflix from its debut at Sundance.

“The Cave” (2019, PG-13), the Oscar-nominated documentary about a subterranean hospital service civilians in Syria, arrives on Cable On Demand and VOD.

The modern day film noir “Long Day’s Journey into Night“ (China, 2018, not rated, with subtitles) plunges the viewer into the nocturnal world of China’s rainy Guizhou province with a puzzle-like narrative and a dreamy atmosphere. On Criterion Channel.

Cult pick: “Blade Runner: The Final Cut” (1981/2007, R) starring Harrison Ford as a cop hunting escaped replicants in the overcrowded, ecologically devastated future, was a flop upon release but became one of the most influential science fiction films of its time. The definitive director’s cut is now streaming on Netflix.

Emilia Clarke and Henry Golding star in “Last Christmas” (2019, PG-13), a romantic comedy inspired by the George Michael song, and Ewan McGregor plays adult Danny Torrance in “Doctor Sleep” (2019, R), based on Stephen King’s sequel to “The Shining.” Also on DVD and at Redbox. Also new:

“They’ve Gotta Have Us” (2018, not rated), a three-part documentary on black actors and filmmakers in Hollywood, and Renae Bluitt’s “She Did That” (2019, not rated), a look at four African-American women who broke the glass ceiling, arrive for Black History Month. They are joined by:

International affairs: a fugitive guerilla soldier in 1944 Spain, left deaf by an explosion, tries to survive in “The Silent War” (Spain, 2019, TV-MA, with subtitles). The romantic drama “Hum Aapke Hain Koun” (India, 1994, with subtitles), top-grossing Bollywood film of all-time, is an excellent entry into the world of Bollywood musicals.

International TV: a lonely programmer calls in love with an experimental hologram designed to look like its creator in the Netflix Original limited series “My Holo Love” (Japan, with subtitles).

True stories: “#cats_the_mewvie” (2020, not rated) chronicles the rise of cat memes and icons on social media.

Classics: Testosterone runs thick in Robert Aldrich’s “The Dirty Dozen” (1967), with Lee Marvin and Charles Bronson on a mission behind enemy lines in World War II, and Don Seigel’s “Dirty Harry” (1971, R) with Clint Eastwood as a reactionary cop who breaks all the rules to track a sadistic killer.

More movies new to Netflix this month: “The Ballad of Lefty Brown” (2017, R), a western with Bill Pullman and Peter Fonda;

Jack O’Connell and Ben Mendelsohn star in the gritty prison drama “Starred Up” (2014, not rated) from David Mackenzie.

Streaming TV: a team of con artists target the greedy and the criminal in the snappy British series “Hustle: Seasons 1 and 2” (2004-2005) with Adrian Lester, Jaime Murray, and Robert Vaughn.

International affairs: a wild buffalo breaks free and wreaks havoc in a small town in “Jallikattu (India, 2019, not rated, with subtitles). a mix of horror, action drama, and social satire. Also new:

Kid stuff: special Valentine’s Day episodes of “If You Give a Mouse a Cookie” and “Pete the Cat” arrive for young kids along with “Clifford: Season 1B.”

Westerns: John Wayne stars in John Ford’s “The Man Who Shot Liberty Valance” (1962) with James Stewart and the comic “McLintock!” (1963) with Maureen O’Hara.

A collection of classic Italian films are new to Prime Video, including Pier Paolo Pasolini’s feature debut and “Accattone” (Italy, 1961, with subtitles) and his acclaimed, Oscar-nominated “The Gospel According to Matthew” (Italy, 1964, with subtitles). Also newly arrived:

Joel Edgerton and Tom Hardy are estranged brother who meet back up in the ring in “Warrior” (2011, PG-13), a family drama set in the world of mixed martial arts. Nick Nolte was Oscar nominated for playing their father, and alcoholic former boxer (Prime Video and Hulu).

Noomi Rapace is a grieving mother who comes to believe that her neighbor’s daughter is her own child in the psychological thriller “Angel of Mine” (2019, R). Yvonne Strahovski and Luke Evans costar.

“Into the Dark: My Valentine” is this month’s installment in the series of feature-length horror film.

International affairs: “Margarita with a Straw” (India, 2014, not rated, with subtitles) follows a young woman (Kalki Koechlin) with cerebral palsy from India to New York on a journey of self-discovery.

TV: The season premieres of NBC sitcom “Brooklyn Nine-Nine: Season 7” and the Fox competition show “The Masked Singer: Season 3” are now available, along with series premieres of “Indebted” and “Lego Masters.”

Available exclusively on HBO streaming platforms is the second season of “The Teenage Psychic” (Japan, with subtitles).

Julie Dash’s landmark “Daughters of the Dust” (1991, not rated, with subtitles), a drama set in the 19th century Gullah culture of America’s Southern Atlantic coast, and “Lamb” (Ethiopia, 2015, with subtitles), a coming-of-story in the mountains of Ethiopia, debut this month.