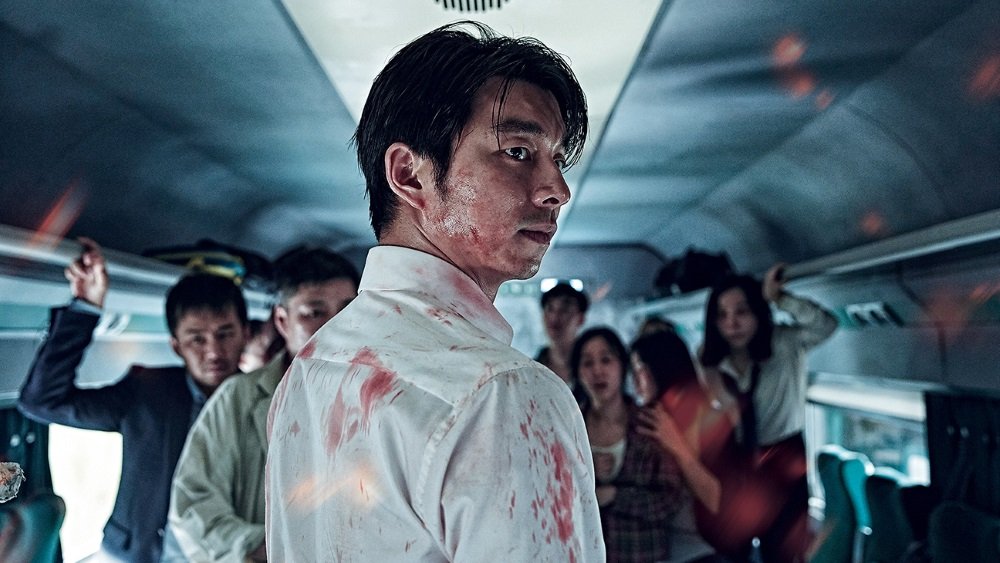 You could call Train to Busan (South Korea, 2016) “Zombies on a Train”—it certainly makes a catchy logline and it frames the premise accurately and succinctly—but it reduces this fleet, fierce, unexpectedly human thriller to a mere gimmick.

Apart from the slyly eerie prologue, the film opens without any hint of the viral rampage to come. Workaholic divorced dad Seok Woo (Gong Yoo) is a hedge fund manager in a Seoul financial firm juggling a financial crisis while his neglecting his young daughter Soo-an, one of those adorable tykes whose moon eyes and disappointed face gives us a history of neglect—not the physical abuse kind, mind, he’s just been absent in every meaningful way—and finally shames him into taking her back to her mother on the train to Busan. It’s just another ride as far as the passengers are concerned because the train pulls out just before the yard is overrun in a swarm of rabid bodies, but not before one infected soul climbs aboard.

It’s a classic set-up: ordinary folks in an extraordinary situation, their character put to the test as the infection spreads and the survivors become separated. The neglectful father becomes ferociously protective of his daughter, ready to sacrifice others to survive until his daughter kicks his conscience back to life, and there are carloads of classic archetypes on his journey: a burly, protective man with his pregnant wife, elderly sisters in their dotage, a baseball team, a teenage couple, and a privileged corporate fat cat who is ready to sacrifice anyone in his way—the kind of man we fear our workaholic dad is on the verge of becoming.

Filmmaker Yeon Sang-ho makes superb use of the restricted quarters of the train and delivers a nerve-wracking journey through an abandoned station, and he adds a few of his own flourishes to the conventions. These voracious, single-minded creatures are not the shuffling George Romero type but the fast, fleet kind of 28 Days Later, and they move in a swarm like in World War Z, climbing over one another in a rush for fresh meat and attacking in waves like water gushing from a broken dam. These behavioral details beyond the digital effects give the zombie hordes a peculiar and consistent character that, inspirations and tributes aside, set them apart from other films. This is viral horror with an organic purity and a cinematic distinction to it, and in its own bloody, diseased way, it’s a thing of beauty.

Train to Busan parallels the devolution of the hordes with the evolution of the absent father, a journey played out in big, emotional outbursts (cue tears from the vulnerable tyke) and in the kind of bonding under fire that action movies can, at their best, express in purely visual terms. The former is the type of heart-on-the-sleeve-and-swung-around-the-room sentiment that fans of Hong Kong action movies of the eighties learned to embrace but still strike the uninitiated as weepy and over-the-top. Just take it for what it is because it really does pay off. This is a clever, fast-moving zombie thriller that offers characters that you come to care about and sacrifices that carry dramatic weight along with cannily-crafted and superbly-executed scenes of modern zombie horror.

Also streaming on Shudder and free on Hoopla, which is available through most library systems.

Also on Blu-ray and DVD from Well Go, with both original Korean language and English dubbed soundtracks, and two Korean-language promotional featurettes, and on SVOD through Amazon Video

, iTunes, GooglePlay, and other services. Availability may vary by service.
Train to Busan [DVD]