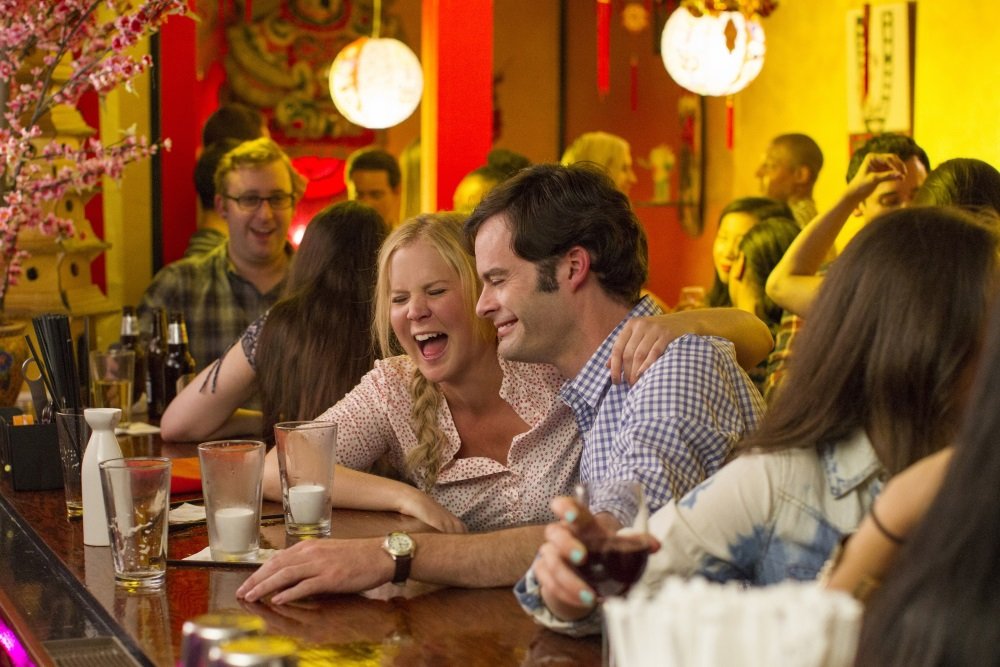 I don’t think I laughed as hard at any movie comedy in 2015 as I did with Trainwreck, Amy Schumer’s big screen debut feature as writer / star. Abetted by the direction of Judd Apatow, who has been moving from male-centric comedies to more inclusive stories, she brings her raunchy style of social commentary and self-effacing humor to the big screen in film that plays with familiar conventions while Apatow gives it that loose, easy-going quality that brings the chemistry.

Schumer plays a version of her stand-up persona so no surprise she keeps her name. Amy is a commitment-phobic magazine editor and writer with a policy of one-night stands and a habit of binge-drinking. Her philosophy of dating—pretty much her entire life, in fact—is the unfortunate product of a misanthropic, irresponsible father (Colin Quinn), who had her and sister chant his motto “Monogamy isn’t realistic” from an impressionable age. Thanks dad. Her sister (Brie Larson in an underwritten role) apparently overcame the conditioning but Amy is living the dream, looking out for her own pleasure and cutting off any possibility of messy emotional complications by sneaking out once she’s sated her sexual needs.

She’s assigned to profile a sports surgeon (Bill Hader), a sweetly nerdish guy who asks her out despite all the red flags her unfiltered interview sends out. They make a strangely cute couple, which creates a crisis for Amy, who has managed to keep commitment and emotional entanglement out of her life. Commitment is scary and that calls for another drink.

You could say Schumer upends the expectations of the traditional sex comedy, taking the role usually reserved for the crude, sex-obsessed guy whose cruel wit and pose of brutal honesty is just an excuse for self-absorbed insensitivity, but that undervalues her work. It’s not simply a matter of showing us that women can be just as glib and shallow and raunchy as men. She’s confident and brazen, a power professional with an unapologetic sexual appetite and an arrested emotional development, perhaps not an original but certainly someone we haven’t seen quite like this on the screen.

Schumer is the center of it all but she’s generous with the laughs, spreading it around the entire cast, and Apatow brings the chemistry out of the cast, from the guy talks between Hader’s doc and friend and former patient LeBron James to the strained date between Amy and boy toy John Cena, a personal trainer who fails hilariously when asked to talk dirty during sex and manages to make trash talk threats sound weirdly homoerotic. I credit Apatow and Schumer for making Cena authentically funny. It’s a little too generous at times, by which I mean overlong, a common issue with Apatow’s films, but on home video that’s less of an issue. And Schumer also makes the film’s one serious tearjerker of a scene completely authentic, a nakedly honest display of unconditional love for someone who never earned it. Mostly it’s funny, a mix of filthy and sweet that makes it all work.

Available in both R-rated theatrical version and extended unrated version with more raunch.

On DVD, Blu-ray, and SVOD through Amazon Video (with both R-rated

) and other services. Availability may vary by service.
Trainwreck [DVD]

Blu-ray and DVD versions feature commentary by Apatow and Schumer with associate producer Kim Caramele, the usual collection of deleted scenes, a gag reel, and the Apatow disc staple “Line-O-Rama,” which offers montages of improvisations from select scenes.

Exclusive to the Blu-ray is a “Behind the scenes” collection of a dozen short featurettes, the featurette “Directing Athletes: A Blood Sport” featuring the athletes who appear in the film, all the clips from the unbearably pretentious fake film within the film “The Dogwalker,” video and audio clips from the film’s promotional tour, extended scenes, and more deleted scenes, plus bonus DVD and Ultraviolet Digital HD copies of film.