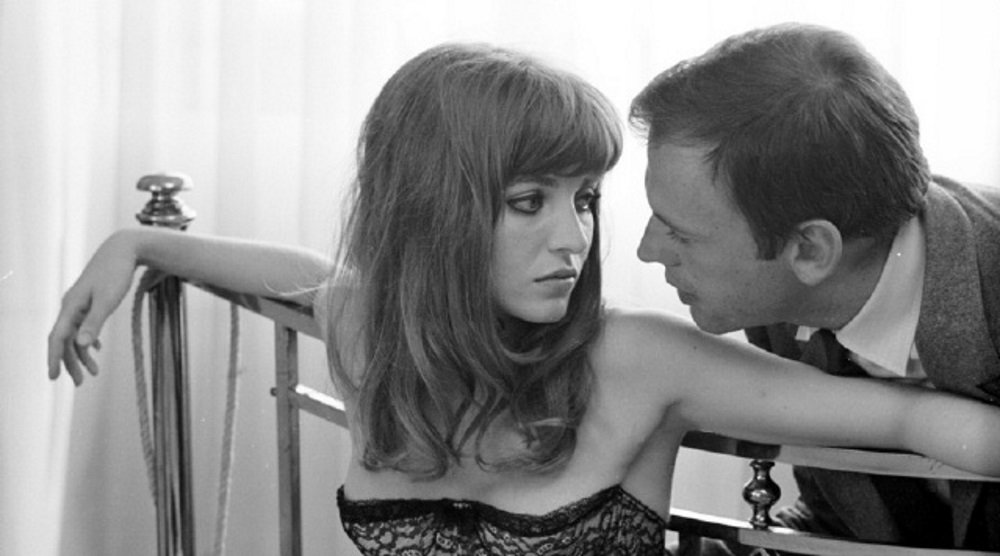 He’s best known as an experimental novelist in the nouvelle roman movement of the fifties and as the screenwriter of Alain Resnais’ elegant yet conceptually daring French nouvelle vague landmark Last Year at Marienbad, but Alain Robbe-Grillet was also a filmmaker in his own right. He directed ten features in a career that spanned over 40 years and Trans-Europ Express (1966), a lighthearted play with spy movies, erotica, and storytelling from 1966, was his most popular success and most audience-friendly production.

Three filmmakers (one of them played by Robbe-Grillet himself) board a train and begin working out the story for a film about drug trafficking. When the actor Jean-Louis Trintignant briefly ducks into their cabin, he’s quickly cast as their main character, Elias, a smuggler involved in a big score with a shady criminal. Their sketchy, silly little plot (as illustrated in a gag sequence right out of a silent movie parody) suddenly gets a face and a grounding. As much as a film that is constantly rewritten and revised on the run can be said to be grounded.

Think of it as his Breathless, a pulp story refracted with his own distinctive take on narrative deconstruction and sexual perversity. It’s a film that plays out in parallel, an illustration of the story being spun on the train, and Robbe-Grillet plays with the gimmick as scenes are constantly revised and rewritten by the trio, which sends the spy movie rewinding and twisting back on itself. But the director doesn’t make the equation so literal; multiple versions seem to spin out of the revisions and the fiction crosses over into the “real” world of the filmmakers.

Call it quantum storytelling. Trintignant is at once Jean-Louis the private citizen (a man with a furtive fascination with pornography), Elias the character (who likes a little bondage in his prostitutes, notably femme fatale Marie-France Pisier), and Trintignant the actor playing the character Elias. The story, meanwhile, is both a fictional construct and a “real” event, perhaps brought to life by the storytelling itself. Dead characters come back to life and the entire enterprise seems poised to begin again once the filmmakers disembark. Just like heading back into the pleasures of cinema stories and their mix of contrived twists and visual spectacle.