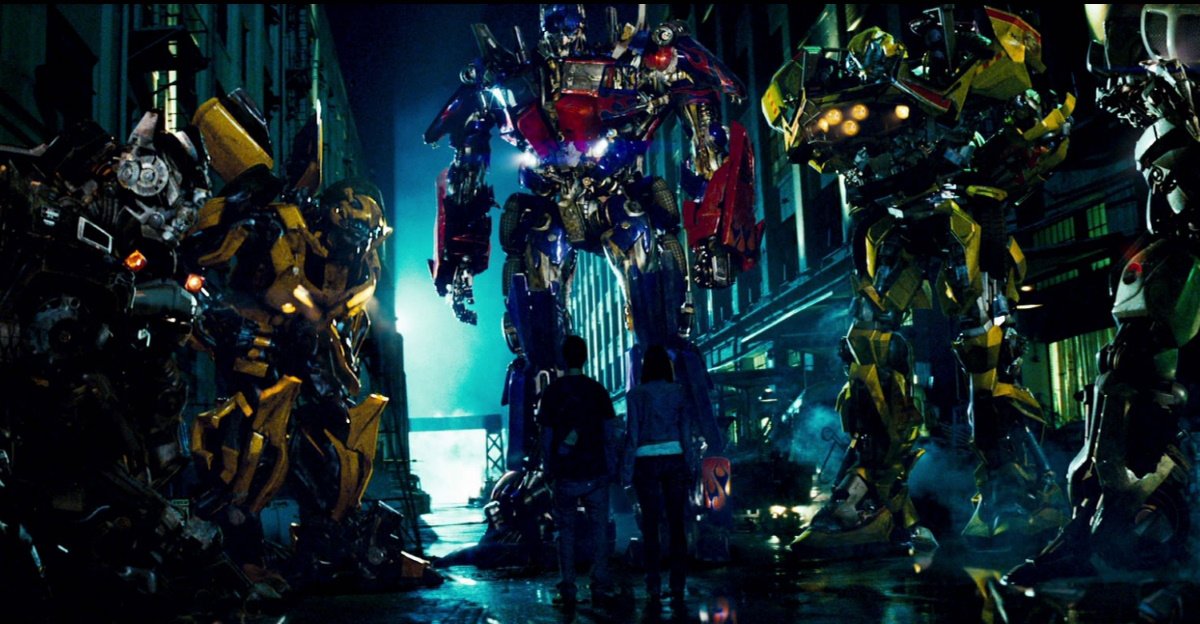 The first live-action Transformers (2007) movie, based on a line of toy action figures that spawned a series of animated TV shows and a 1986 animated feature, is a screeching metal, smash-and-crash, extreme action movie lover’s wet dream. It’s also a wildly absurd, visceral fantasy and far more fun than it ought to be.

The premise: the Transformers are living robots that fold themselves into all sorts of vehicles like mechanical origami with a breakdancing flair. Humankind gets caught in a millennia-long battle between the quantum Erector Set alien races, the chivalrous Autobots and the vicious Decepticons (registered trademarks both).

High-school goofball Sam (Shia LaBeouf) may just save the planet from a mechanical makeover, with the help of a high school hottie (Megan Fox). And, of course, his high-performance bodyguard (disguised as a beat-up Camaro) and the morph squad of alien robots. The rest of the complications – the American Air Force squad (Josh Duhamel and Tyrese Gibson) in Qatar hunted by an unidentified killing machine, the geek squad (Rachael Taylor and Anthony Anderson) drafted by the Secretary of Defense (Jon Voight) to trace the high tech invasion, John Turturro’s bizarre appearance as a hard-case agent from the classified Section Seven – are mere details.

It’s all about sheer visceral charge of mechanics in motion. These super-sized Swiss Army Knives morph in mid-flight from robot to vehicle and back again and lay waste to entire cities in a full-on killbot deathmatch. They may declaim in word balloons right out of cheesy comics and bad cartoons, but they are grandeur in motion thanks to a level of computer animation that, in 1995, was remarkable (it’s industry standard now).

Director Michael Bay manages (with help from producer Steven Spielberg?) to both take this absurd pulp premise seriously and have a blast with the absurdity of it all. He even turns a scene of robot hide-and-seek into good-natured slapstick farce. Silly? Sure, but if you’re too caught up in snags of logic to enjoy the spectacle, you are clearly in the wrong film.

The screenplay is by Roberto Orci & Alex Kurtzman, who went on to reboot ‘Star Trek’ movies, and Kevin Dunn and Julie White costar as Sam’s parents.

It was nominated for three Academy Awards in technical categories..

Also on Blu-ray and DVD and on SVOD through Amazon Video, iTunes, GooglePlay, Vudu and/or other services. Availability may vary by service.
Transformers [Blu-ray]
Transformers [DVD]
Transformers [4K UHD + Blu-ray]

The single edition DVD features commentary by Michael Bay, who practically narrates his directorial journey and tells you exactly the way he rolls when he makes a movie. The Two-Disc Special Edition DVD and Blu-ray is packed with over two-hours of detailed featurettes that explore the development of the script and show Bay on the set creating “Bayhem” with the human stars (“Our World”) and the origins and creation of the mechanical stars and the partnership with the Air Force for the battle scenes (“Their War”). A third section, “More Than Meets The Eye,” features an animated gallery of early sketches and production designs, trailers, and the best featurette on the disc: “From Script to Sand: The Skorponok Desert Attack,” which thoroughly details the production of a single action scene in a brief nine minutes. If you muck about on the special edition menus and clicking the untitled icons, you can even find Michael Bay’s dream come true: his own action figure.