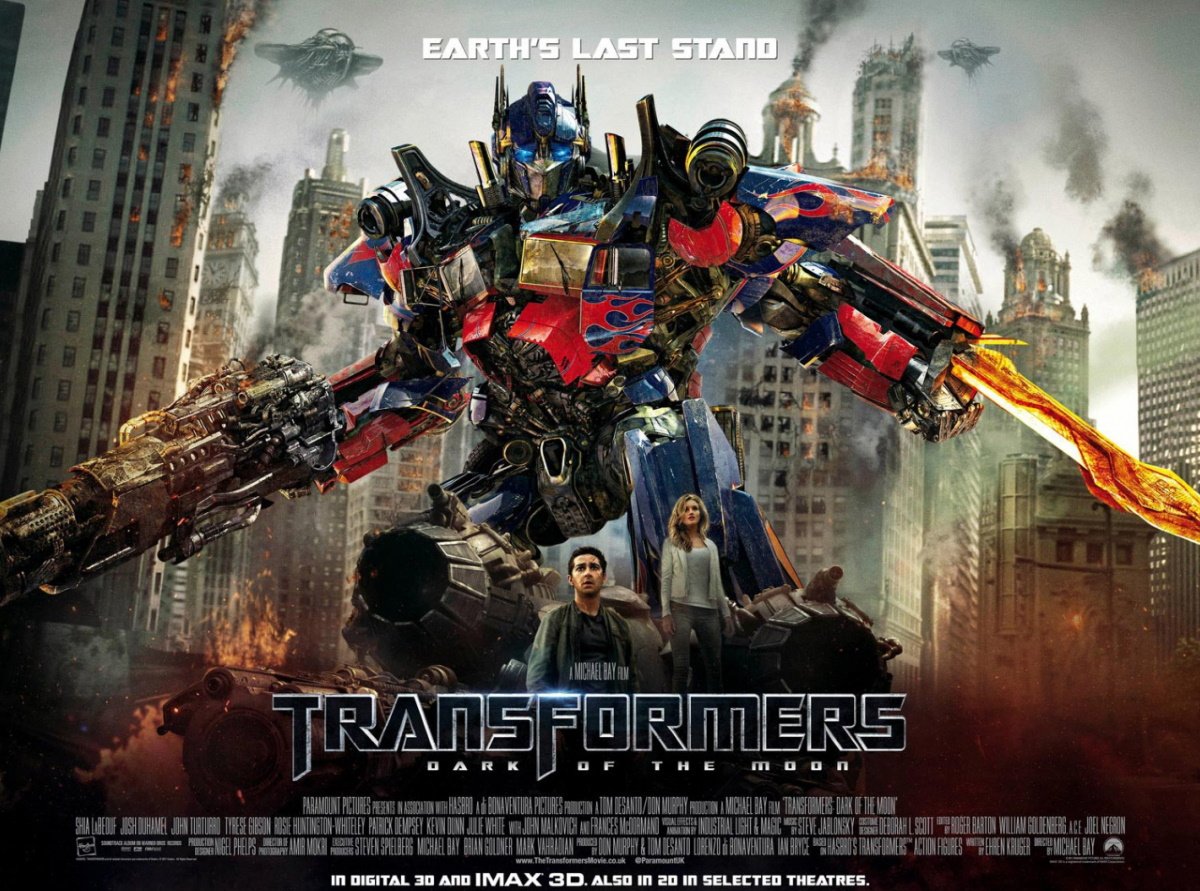 Transformers: Dark of the Moon (2011), Michael Bay’s third rock ’em sock ’em giant robot spectacular, was shot and designed for 3D. The format forced the director to slow his chaotic editing down and create a coherent action canvas, and for a change you can actually see the transformations unfold and the action play out in sustained shots. It’s just the story that makes no sense.

What passes for a screenplay involves the discovery of Sentinel Prime, the former leader of the Autobots, on the dark side of the moon, and the Decipticon plot to enslave humanity to rebuild their homeworld. Meanwhile, back on Earth, once and future hero Sam Witwicky (Shia LaBeouf) is trying to land a job. He has, however, landed a supremely hot and utterly vacant new girlfriend (Victoria’s Secret model Rosie Huntington-Whiteley in her acting debut, which largely consists of posing and walking around seductively in runway fashions and underwear) and an absurdly luxurious Washington D.C. loft.

This one leans farther into the comedy than previous installments, with John Turturro back as the absurdly obsessive Agent Simmons and John Malkovich as an eccentric software genius, and special credit goes to Alan Tudyk, who vamps tired bits with madcap commitment and wild intensity. They keep the film moving until Sentinel Prime is revived (with the voice of Leonard Nimoy, complete with gratuitous “Star Trek” gag), the evil Decipticon scheme is revealed, and the film revs up for an hour of non-stop combat. Because when you get down to it, this is a movie about giant alien robots who go to war in Chicago and destroy half the city along the way. Who needs a story?

Bay crams the screen with virtual mechanics in constant motion but he also has a feel for the liquid quality that CGI can deliver and he gives the robot motion a grace that belies the size and scale of the destruction. It’s kind of fun to watch unfold. So as heavy metal fantasy spectacle, Transformers: Dark of the Moon is impressive, but it’s more about momentum than logic or narrative coherence. You either take it on faith that the rapid-fire succession of scenes and exposition actually add up to a story and enjoy the ride, or sink 2 ½ hours into the most expensive abstract disaster film ever made.

Josh Duhamel and Tyrese Gibson also return, along with Kevin Dunn and Julie White as the parents. Patrick Dempsey, Frances McDormand, and Ken Jeong costar, with appearances by Buzz Aldrin and Bill O’Reilly as themselves. The script is again by Erhen Kruger.

It earned Oscar nominations for sound and visual effects, and eight Razzie nominations, which as you may guess from the name is the opposite of the Academy Awards.

On DVD, Blu-ray, and Blu-ray 3D editions. The original DVD and Blu-ray feature no supplements. The four-disc Blu-ray 3D Combo features Blu-ray 3D and standard editions, a bonus DVD, a digital download, and an Ultraviolet digital copy for download and instant streaming, and plus supplements: the feature-length “Above and Beyond: Exploring Dark of the Moon,” the interactive, multi-angle “Deconstructing Chicago,” a collection of brief featurettes, a short documentary on the real life American space program, and galleries of art and stills exploring the robots and technology of the film.