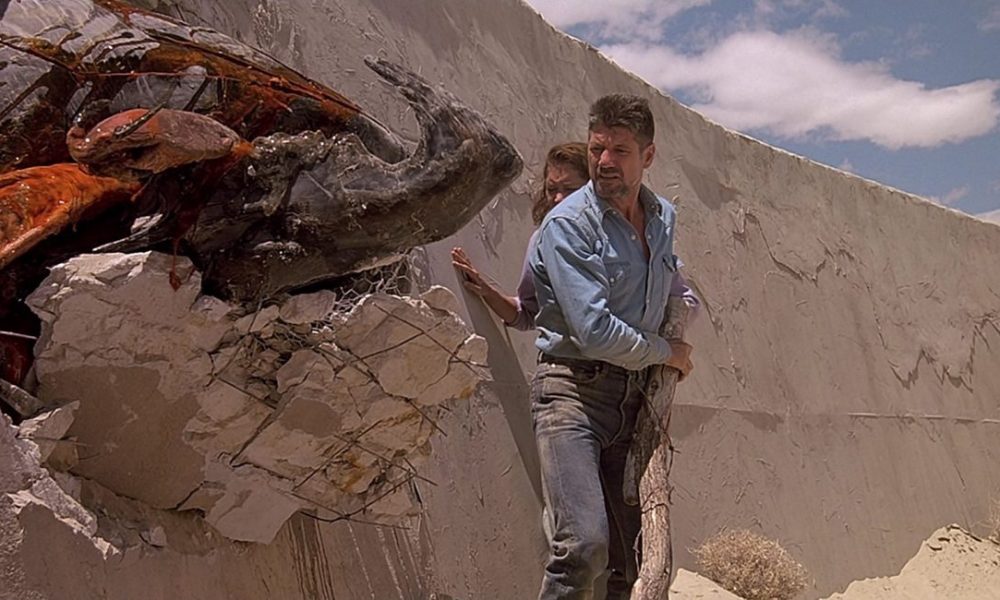 Tremors (1990) is a lively monster movie filled with offbeat humor, eccentric characters and a clever twist on a classic genre.

Odd-job buddies Kevin Bacon and Fred Ward become unlikely heroes when subterranean prehistoric creatures start churning up the ground of their little town and gobbling up the local population. Think of the graboids as carnivorous earthworms on speed, all teeth and blind momentum.

It’s a creature feature by way of a contemporary western by virtue of setting, a small desert town in Nevada with the irresistible name of Rejection. Gun-toting survivalist couple Michael Gross and Reba McEntire are the closest the film comes to cowboys, and even they drive around in pick-up trucks (theirs, of course, include gun racks), but the parched desert landscape and the mountains that ring the box canyon give the film a frontier flavor.

Director Ron Underwood casts a playful tone on a B-movie situation and plays it all with tongue-in-cheek humor, which pretty much negates any real horror. It is awfully fun, however, and it spawned a whole bunch of director-to-video sequels, including a prequel set in the genuine old west of the 1880s, and even a short-lived series. None come close to the original.

Finn Carter, Victor Wong, Bibi Besch, and Charlotte Stewart (a veteran of both Little House on the Prairie and Twin Peaks) costar.

Leaves Peacock at the end of November. Add to My List on Peacock