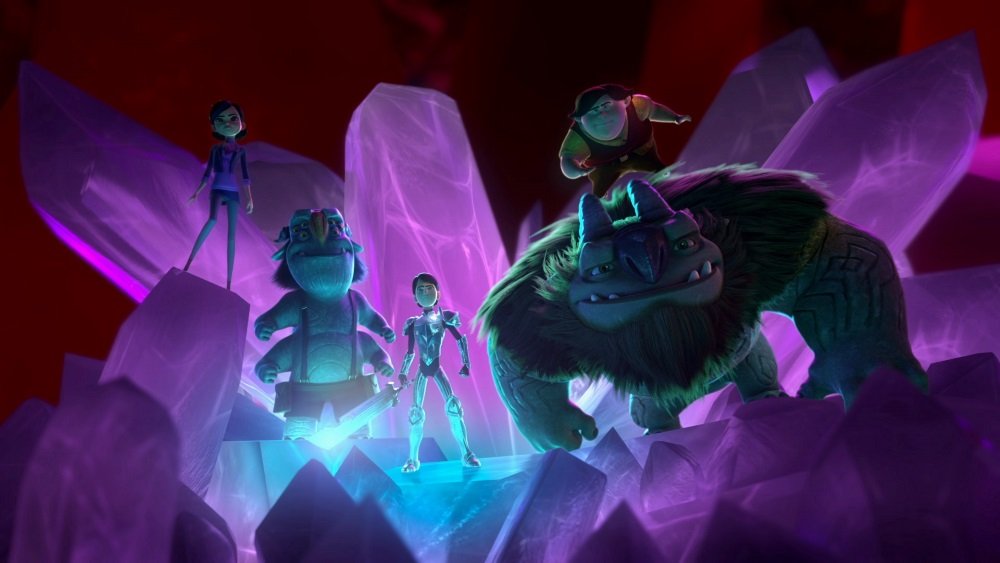 Filmmaker Guillermo del Toro, the most gleefully inventive fantasist making movies today, adapts his young adult novel to the small screen in Trollhunters, an animated series from Dreamworks Animation created for Netflix. The heroes are human kids but their world is vastly expanded when schoolkid Jim (voiced by the late Anton Yelchin) inherits the Amulet of Merlin and discovers a society of trolls, some good, some bad, all of them really, really cool looking. Kelsey Grammer voices Jim’s advisor Blinky and Ron Perlman voices the biggest bully of the bad trolls.

“[I]t’s more streamlined and less explicitly gruesome than the book, and at the same time busier — more of a TV series,” writes Los Angeles Times TV critic Robert Lloyd. “Characters have been invented, lost or altered. Jokes have been punched up; the action, of which there is much, has the visceral advantage of being staged rather than described.”

Del Toro produces the series with Marc Guggenheim, who is currently shepherding Arrow and Legends of Tomorrow on the CW, and gives the show a similar serialized format.”They have made their series with brio and wit, as much majesty as the budget will allow, and enough suspense and mystery to make one invest in subsequent episodes as they arrive.”

26 episodes now available. Queue it up!

Clint Eastwood’s Sully, starring Tom Hanks as Chesley “Sully” Sullenberger, offers a startling recreation of the 2009 water landing of a passenger airliner on the Hudson but the film is less a thriller than a celebration of everyone who helped save the lives of every passenger on board. A superb drama with refreshingly understated direction. Aaron Eckhardt, Laura Linney, and Anna Gunn co-star (PG-13). Also on DVD and Blu-ray. Reviewed on Stream On Demand here.

Denzel Washington and Chris Pratt lead The Magnificent Seven in the latest remake of the classic western (itself adapted from Akira Kurosawa’s “The Seven Samurai”). This time it’s a mission of revenge against a ruthless mining baron (Peter Sarsgaard) (PG-13). Also on DVD and Blu-ray and at Redbox.

Lily Rabe is Miss Stevens (2016) in the indie drama of a theater teacher who connects with her students on a road trip to a drama competition (not rated).

Matthias Schoenaerts is a psychologically scarred bodyguard whose obsessive protection of his charge (Diane Kruger) becomes dangerously delusional in Disorder (2015, not rated).

Netflix launches more shows in time for the holiday break. The Canadian science fiction series Travelers sends four agents back from the future to save the world (12 episodes) and from Britain comes the mockumentary Borderline, about inept border agents in a Northend Airport.

Sense8: A Christmas Special offers a holiday bonus between seasons of the heady science fiction series.

Foreign language TV: The French comedy Call My Agent! (2015) is a six-episode mini-series set in the world of temperamental actors and exasperated talent agents. In French with subtitles. Also in French is The Break, a dark crime thriller from Belgium.

True stories: God Grew Tired of Us (2006) profiles for boys who fled their wartorn country and eventually came to the U.S. after wandering sub-Saharan Africa for years (not rated).

Stand-up: Gabriel Iglesias: Sorry For What I Said When I Was Hungry.

Woody Allen’s Café Society is a touching story of how first love never leaves us even as we’ve moved on to other relationships, wrapped in a wry comedy of celebrity and glamor in 1930s Hollywood and New York City. Jesse Eisenberg, Kristen Stewart, and Steve Carell star (PG-13). Reviewed on Stream On Demand here.

The first season of the SyFy series The Expanse, based on the bestselling novels of James S.A. Corey, delivers interplanetary conspiracy and grown-up space opera for the small screen. 10 episodes. Reviewed on Stream On Demand here.

Anomalisa uses stop-motion animation, a bleak sense of humor, and a rare condition to explore the misery of modern life and is the first R-rated film nominated for an Oscar for Best Animated Feature. David Thewlis and Jennifer Jason Leigh are the featured voices and Tom Noonan takes care of the rest of the characters. All of them. It’s unnerving. Features puppet nudity, sex, and adult language. Amazon Prime and Hulu.

The Trip to Italy (2014) reunites “The Trip” director Michael Winterbottom with stars Steve Coogan and Rob Brydon for a culinary tour with comic commentary.

Midnight Special is a mix of science fiction odyssey and conspiracy thriller grounded in the devotion of a father (Michael Shannon) determined to save a son with inexplicable powers from everyone who would exploit him. Written and directed by Jeff Nichols, whose new film Loving is an Oscar contender, it is an intimate and moving alternative to the bombastic superhero adventures dominating the movies. Joel Edgerton, Kirsten Dunst, and Adam Driver co-star (PG-13). Reviewed on Stream On Demand.

The documentary Risky Drinking is a case-study look at how drinking adversely affects American lives (not rated).