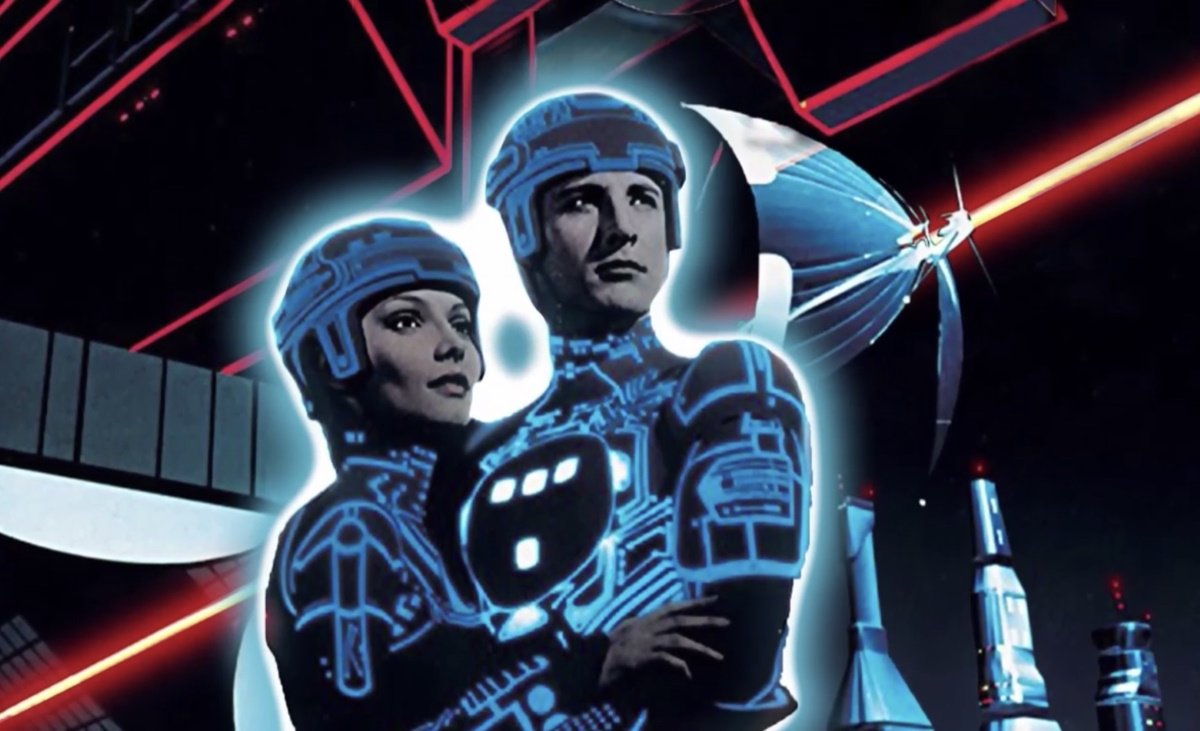 Tron (1982) is the first videogame movie. Which is to say it takes inspiration from the imagery of arcade games of the era and then creates its own conceptual world out of the cues.

Decades later, after The Matrix films, the CGI revolution, and videogame technology as sophisticated as the most expensive Hollywood blockbusters, Tron is a quaint product of its time. And that’s before you get to the story of the shaggy computer programmer and video-game geek (Jeff Bridges) who returns to the corporation that hijacked his program and gets literally transported into the virtual world.

The digital world is envisioned as a video game and the Master Control Program super-villain is 2001‘s HAL by way of Roman Emperor Nero, an all-powerful computer program with a God complex and a love of terminal video games. Take away the zippy motorcycles and the ethereal sailship and it’s a downright gloomy purgatory where ghostly B&W figures in incandescent suits wander a dungeon-like maze that periodically surges and cackles with electrical pulses—surely not what Disney thought they were getting into with the original video game adventure.

Jeff Bridges makes for a fun human drop-out turned cyber-warrior and Bruce Boxleitner is stalwart as the good guy program Tron and nerdish as his human user/creator. Cindy Morgan and Barnard Hughes co-star as fellow video rebels and David Warner does villain duty again as the corporate shark and his cyber alter ego.

The film groundbreaking in its day for visualizing computing culture in an era before home computers, point-and-click operating systems, and cyberspace, and for using rudimentary computer animation to create the computer imagery… or at least most of it. Director/writer Steven Lisberger came from an animation background and resorts to old-school tools and simple animation to enhance the live action shooting and computer effects.

Its visualization of computing culture before home computers, point-and-click operating systems, and cyberspace was both visionary and limited. For all the dazzle of the cybercycles and sailships and glowing game characters, it’s a pretty simplistic film, a hero’s journey reduced to binary poles of good and evil. But that dazzle is still oddly compelling, thanks to designs by futurist Syd Mead (who also contributed to Blade Runner) and visionary comic artist Jean Giraud, aka Moebius.

Also on Blu-ray and DVD and on SVOD through Amazon Video, iTunes, GooglePlay, Fandango, Vudu and/or other services. Availability may vary by service.
Tron [Blu-ray+DVD]
Tron (Two-Disc Special Edition) [DVD]

On Blu-ray and DVD in a two-disc special edition. The animated menu alone is more sophisticated than the then-pioneering digital effects of the 1982 original, and the supplements include the 88-minute “The Making of Tron,” a production-oriented commentary track featuring Lisberger with producer Donald Kushner and visual effects supervisors Harrison Ellenshaw and Richard Taylor, deleted scenes (with introductions by Bruce Boxleitner), alternate music for two scenes, galleries of storyboard to film comparisons, an extensive still gallery and pre-production designs by Syd Mead and Jean “Moebius” Giraud, pre-production animation tests and computer animation designs and demo reels, publicity materials