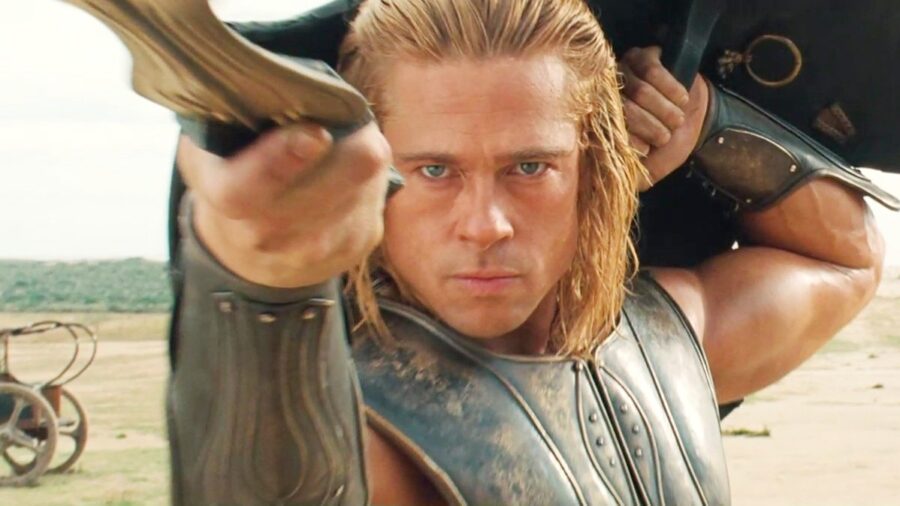 Brad Pitt is the warrior Achilles, Eric Bana is Hector, and Orlando Bloom is Paris in Troy (2004), Wolfgang Petersen’s epic retelling of the Trojan War.

This is based not on history but on legend, specifically Homer’s epic poem “The Iliad.” The Gods of the myth are absent from David Benioff’s adaptation but they haunt the film in spirit as the humans act out of pure, impulsive emotion instead of logic, just like the Gods of old. After all, the war began after young Greek Prince Paris sabotages a peace treaty decades in the making to run away with Helen (Diane Kruger), the Queen of Troy.

As such, it’s hard to take the cataclysmic events of this ancient war seriously, as it is entirely predicated on an unconvincing romantic gesture of a prince with the impulse control of a spoiled brat and the political consideration of a cat in heat. He’s so shallow it barely registers that the great soldiers of the greatest armies on the Aegean Sea die to satisfy wounded egos and loyalties to immature brothers.

Yet Petersen directs with a sweeping style that references the epics of old with the cinematic tools and styles of today. He delivers birds-in-flight-eye’s views of marching legions, massive armadas, and armies in battle, then edits it at the jittery pace of strobe light. The best special effects are the rippling pecs of shirtless bronzed muscle men and the soft flesh of beautiful unclothed (yet artfully posed, just to get that PG-13) women.

Brad Pitt looks great in his cascading locks and pumped-up physique, and he’s just fine in action (these guys battle in the flesh, not in the computer, and the solid, up-close sword battles give them a solidity missing from so many recent films), but it’s hard to buy him as the charismatic leader who commands men who will march to hell on his orders, and Bloom is simply a shallow pretty-boy.

Better are Sean Bean as the devoted Odysseus and Gleeson as Menelaus, and Brian Cox goes to town as the obsessed King Agamemnon. Diane Kruger is blank as Helen (the face that launched a thousand ships), Saffron Burrows and Rose Byrne co-star, and Julie Christie and Peter O’Toole lend their gravitas to the film in small roles.

It was nominated for an Academy Award for costume design.

The two-disc edition includes featurettes on the film’s battle sequences, the special effects, the real life ruins of Troy and the film’s production design, and a 3-D animated guide to Greek myths.

Also on Blu-ray and DVD and on SVOD through Amazon Video, iTunes, GooglePlay, Vudu and/or other services. Availability may vary by service.
Troy [Blu-ray]
Troy [DVD]