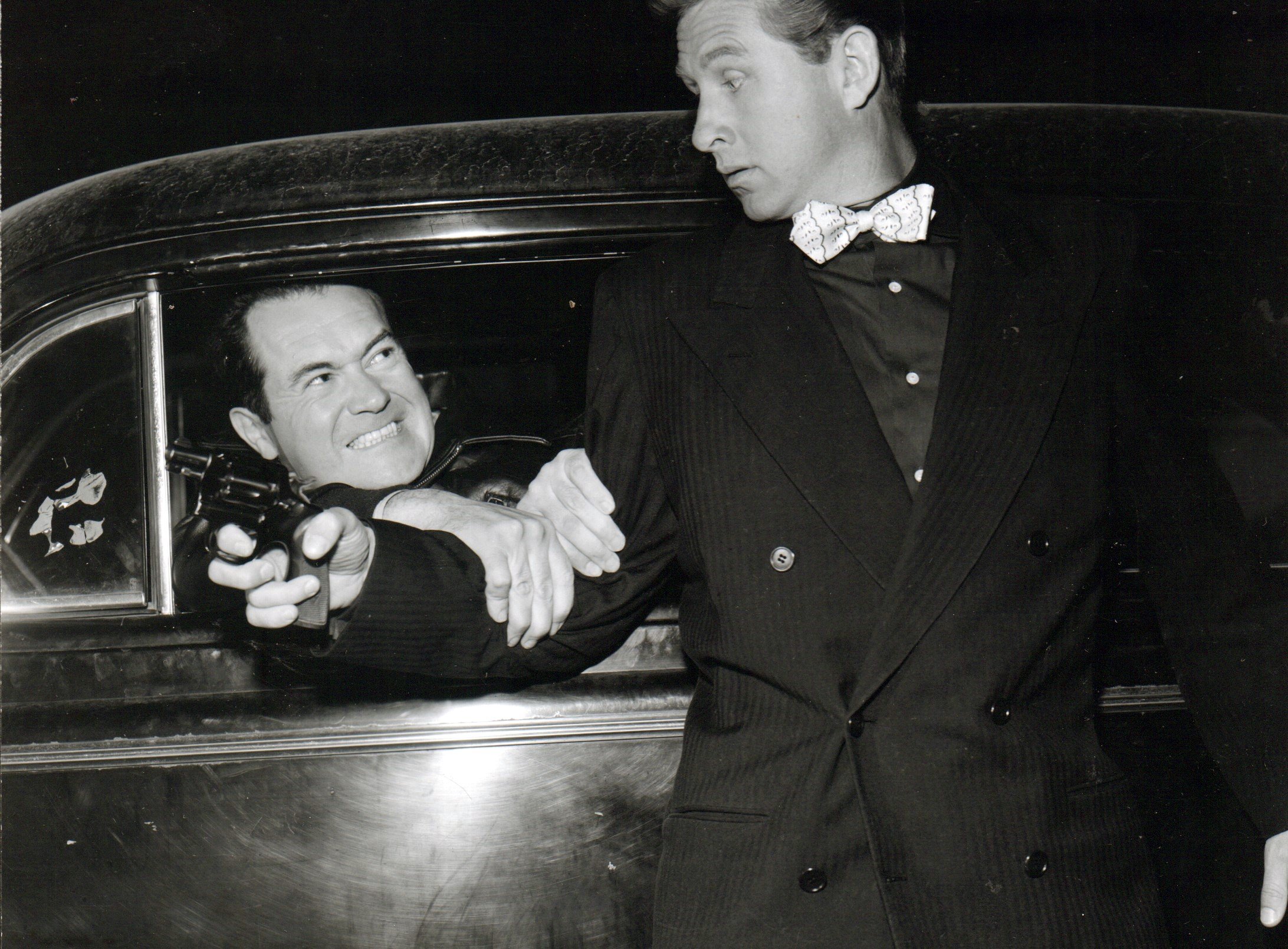 Try and Get Me! (1950), originally released under the title The Sound of Fury, is a 1950 take on the lynch-mob dramas of the thirties dosed with post-war anxiety and sociopathic anger.

Frank Lovejoy stars as Howard Tyler, an out-of-work husband and father in a small California town, desperate to find any job to feed his family and pay the rent. Jerry (Lloyd Bridges) is a preening narcissist who flexes his muscles and admires himself in mirrors as he dresses up, slaps on cologne, and parades in front of Howard as if fishing for compliments. He knows a guy, he says, who needs a guy for a job. He’s the guy and the job is wheelman on a gas station robbery. It’s the first step in a lucrative but doomed partnership with a sociopathic peacock who has plans for a big score.

This is a drama set in the disillusionment of the American Dream in the post-war years as the economic boom grinds to a halt. Lovejoy is well cast. He isn’t the most expressive or magnetic performer—he’s often a well-meaning stiff—but he was one of the everyman actors who took the lead in low-budget crime and action movies of the 1940s and 1950s as the straightforward moral center. He has a bedrock blue-collar, working class quality that director Cy Enfield uses well as the everyman gets eaten up with anxiety and guilt after Jerry’s big plan takes a sudden turn into murder (a particularly sadistic one). Bridges plays the part with a mix of charismatic confidence and power trip, an egotist who sees everyone around him as a potential mark and every job as a necessity to keep him in cufflinks and cash to splurge on high-living. Meanwhile Howard drinks to deaden himself with inevitable consequences.

That’s only half the movie. Paralleling their story is that of newspaper reporter Gil Stanton (Richard Carlson), a journalist who has just been handed a column and uses it to stoke outrage over the crime wave that ends in a high-profile kidnapping and murder. He’s the everyman of the educated, high-earning classes, so sure in his moral position that he never notices how he has fanned the flames of anger and violence into a conflagration until it burns out of control. His debates with a visiting European scientist (Renzo Cesana), who brings the lessons of Europe’s past to the argument, and with his editor (the always great Art Smith), who justifies it all by the increase in sales, aren’t subtle and Enfield can’t do much with them, except to contrast the bloodless conversation and Gil’s arrogant self-righteousness with the explosive fallout in their city.

Try and Get Me! is one of the most interesting lynch mob movies ever made and most caustic social commentaries of anxiety and fear. It’s inspired by a real-life incident and Enfield directs the riot with a kind of newsreel realism that plays down the melodrama and theatrics of earlier films, giving the climax an unnerving quality. The outrage and anger feeds itself until there is no sense of individual action in the escalation. And this is one bit of salacious retitling that improves upon the original and suggests the anger and noir desperation that the film so beautifully generates.

Also on Blu-ray and DVD and on SVOD through Amazon Video, iTunes, GooglePlay, Vudu and/or other services. Availability may vary by service.
Try & Get Me [Blu-ray]
Try & Get Me [DVD]

The Blu-ray debut and new DVD edition from Olive Films is mastered from a restoration by The Film Foundation. It looks excellent. Film noir tends to show it wear more than other genres thanks to all the scenes of night and shadow and this film looks clean and sharp with excellent contrasts. There are no supplements.