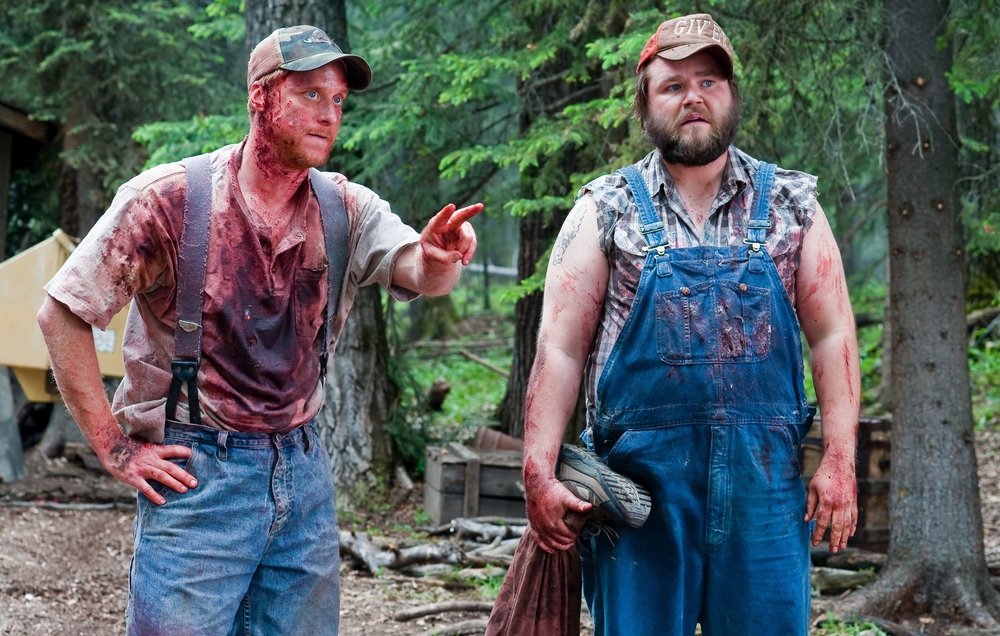 Tucker & Dale vs. Evil (2010) turns a classic horror movie trope– the good looking group of city kids tormented by grimy rednecks and hermits in the backwoods – and turns it inside out, creating not so much a horror comedy as a comedy where the clueless characters think they’re in a horror film and act accordingly.

Call it a comedy of errors with a body count: a group of frat boys and sorority girls, led by sneering alpha male Chad (Jesse Moss), hits the backwoods (Alberta, unconvincingly subbing for the Appalachians) and sees a potential psycho in every hillbilly cliché they glimpse along the way. Enter the eponymous Dale (Tyler Labine), a sweetly stupid idiot savant, and his best friend Tucker (Alan Tudyk), the proud owner of a new “vacation home,” a real fixer upper that appears to have been inherited from a disciple of Ed Gein.

“Officer, do we look like a couple of psycho killers to you,” smiles a bloody, bee-stung Dale. Seen through the eyes of superior breeding and conceited presumption, they apparently do, especially after the kids throw themselves in ill-advised attacks and hysterical flights of panic. The gore is epic and the self-destruction all the funnier when it appears inevitable (case in point: a wood chipper minding its own business as a college kid sneaks up on it). Labine and Tudyk sell it all with their gob-smacked reactions to the unprovoked attacks, but it’s their best-buddy chemistry that makes them so much fun to hang around.

This is very much rated-R but it’s gory good fun.

Streams for free on Kanopy and Hoopla, which are available through most public and college library systems.

, iTunes, GooglePlay and/or other services. Availability may vary by service.
Tucker & Dale vs. Evil [Blu-ray]