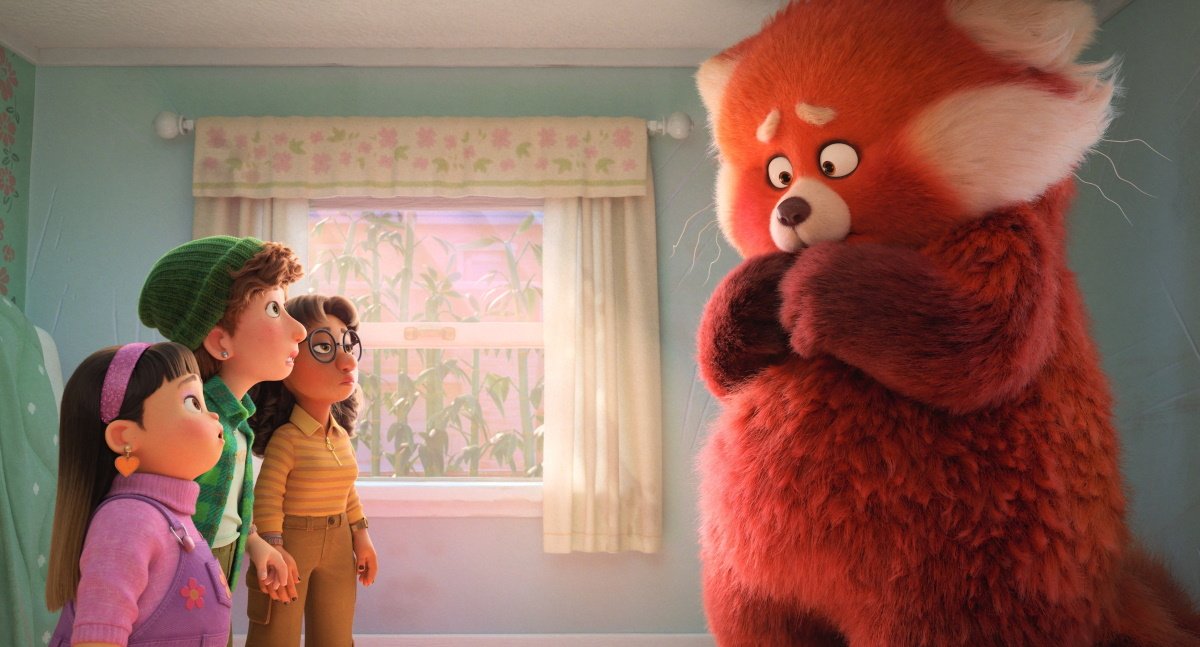 In “Turning Red“ (2022, PG), Pixar’s latest animated fantasy, dorky-and-proud adolescent girl Mei Lee (voice of Rosalie Chiang) wakes up one morning to discover she has transformed into a giant, fluffy, red panda. It happens every time she gets emotionally overwhelmed, which is often. It makes for an imaginative metaphor for puberty but it’s also the story of a spirited girl story chafing against the expectations of her overprotective mom (Sandra Oh) and a loving tale of friendship, determination, and Chinese-Canadian culture. It’s the feature debut of Domee Shi, director of the Academy Award®-winning Pixar short “Bao.” Debuts directly on Disney+.

Ryan Reynolds is a time-traveling fighter pilot who crash lands in 2022 and teams up his 12-year-old self to save the future in “The Adam Project“ (2022, PG-13). Mark Ruffalo, Jennifer Garner, Zoe Saldana, and Catherine Keener costar in the science fiction adventure directed by Shawn Levy. (Netflix)

Samuel Jackson stars as a man suffering from dementia who is offered a radical experimental treatment and Dominique Fishback is the orphan teenager who becomes his caregiver in “The Last Days of Ptolemy Grey“ (TV-MA), a limited series based on the novel by Walter Mosley. Two episodes available, new episodes on Fridays. (Apple TV+)

“The Thing About Pam“ (not rated), based on the hit 2019 podcast, revisits the true story of the 2011 murder of Betsy Faria, the conviction of her husband, and the strange conspiracy behind it all. Renée Zellweger, Judy Greer, and Josh Duhamel star in the limited series crime drama. New episodes on Wednesdays. (Hulu and Peacock)

Jon Hamm is a disillusioned diplomat pulled back in to service to save the life of a friend in “Beirut“ (2018, R), a thriller set in the violence of the undeclared warzone of 1982 Beirut.

Streaming TV: the fifth and final season of “The Last Kingdom“ (TV-MA) about the birth of England;

International TV: the romantic comedy “Once Upon a Time… Happily Never After: Season 1“ (Spain, TV-MA, with subtitles) mixes fantasy and musical in the tale of a separated couple who must reunite in a town where no one can fall in love. It’s from Manolo Caro, from the creator of “The House of Flowers.” Also new:

A college girl comes home to her Indian-American family in New Jersey for a revealing reunion in the comedy “India Sweets and Spices“ (2021, PG-13).

Jake Gyllenhaal stars as a civilian who lost both legs in the 2013 Boston Marathon bombing in “Stronger“ (2017, R), based on a true story.

“Mark, Mary & Some Other People“ (2021, not rated) is an offbeat a romantic comedy of newlyweds who attempts an open relationship.

True stories: “The Beauty of Blackness“ (2022, TV-14) chronicles the first cosmetics brand created exclusively for Black women and “Undercurrent: The Disappearance of Kim Wall“ (2022, TV-14) revisits the story of a journalist who went missing after interviewing an entrepreneur on a submarine.

Streaming TV: the Drew Carey incarnation of “Whose Line Is It Anyway?: Complete Series“ (1998-2007, TV-PG) is now streaming.

“Weekend Family: Season 1“ (France, TV-PG, with subtitles) is the comedy of a new stepfamily whose weekend get-togethers take a different turn with father begins a new relationship.

“Harina: Season 1“ (Mexico, 2022, not rated, with subtitles), a cop comedy about a bumbling duo’s search for a serial killer, is based on a hit sketch comedy.

True stories: “Perfect World: A Deadly Game“ (TV-MA) chronicles how a group of gamers tracked down an internet troll who claimed to have killed two family members.

“Last Exit: Space“ (2022) is a new documentary pondering the future of humans in space from filmmakers Werner Herzog and his son Rudolph.

“The Gospel According to Pier Paolo Pasolini” spotlights 11 films by the often controversial Italian filmmaker, from his Biblical classic “The Gospel According to St. Matthew“ (1964) to the bawdy medieval tales in his Trilogy of Life: “The Decameron“ (1971, R), “The Canterbury Tales“ (1972, NC-17), and “Arabian Nights“ (1974, NC-17) (all from Italy, with subtitles).