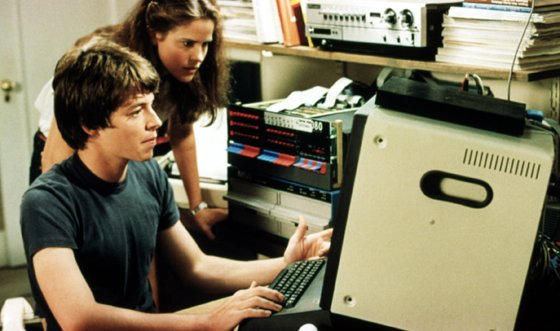 Is it mere coincidence that David Lightman, the high school hacker played by Matthew Broderick in WarGames (1983), comes from the future tech hub of Seattle, home to Microsoft and Boeing? Lightman, a kid not above hacking the school computers to change a grade or two, inadvertently hacks the nation’s super top secret military supercomputer and kicks the countdown to nuclear Armageddon. Now that’s an extracurricular activity that will get MIT’s attention. Not that he planned to end the world, mind you. He was just trying to hack a videogame company’s newest project (via telephone modem) and, along the way, impress a girl (Ally Sheedy).

This is a gangly, goofy Broderick before he went cool as Ferris Bueller, fun-loving high school jokester beloved by all (except high school principal Jeffrey Jones), in Ferris Bueller’s Day Off (1986). The truant hero is determined to take one last day of playing hooky before the school year ends, much to the delight of the entire population of Chicago, with his reluctant best friend (Alan Ruck) and adoring girlfriend (Mia Sara). Jennifer Grey and Charlie Sheen co-star and Ben Stein made his way into the pop culture consciousness as the droning economics teacher desperate for any class participation (“Anyone? Anyone?”).

Put the two together and you have a genius underachiever and video game aficionado destined to either become a software millionaire or end up in jail. Maybe not the ideal role model for today’s adolescents, but he didn’t seem to do too much harm to the eighties generation and he sure knew how to kick off a summer vacation.

Queue up WarGames
Queue up Ferris Bueller’s Day Off