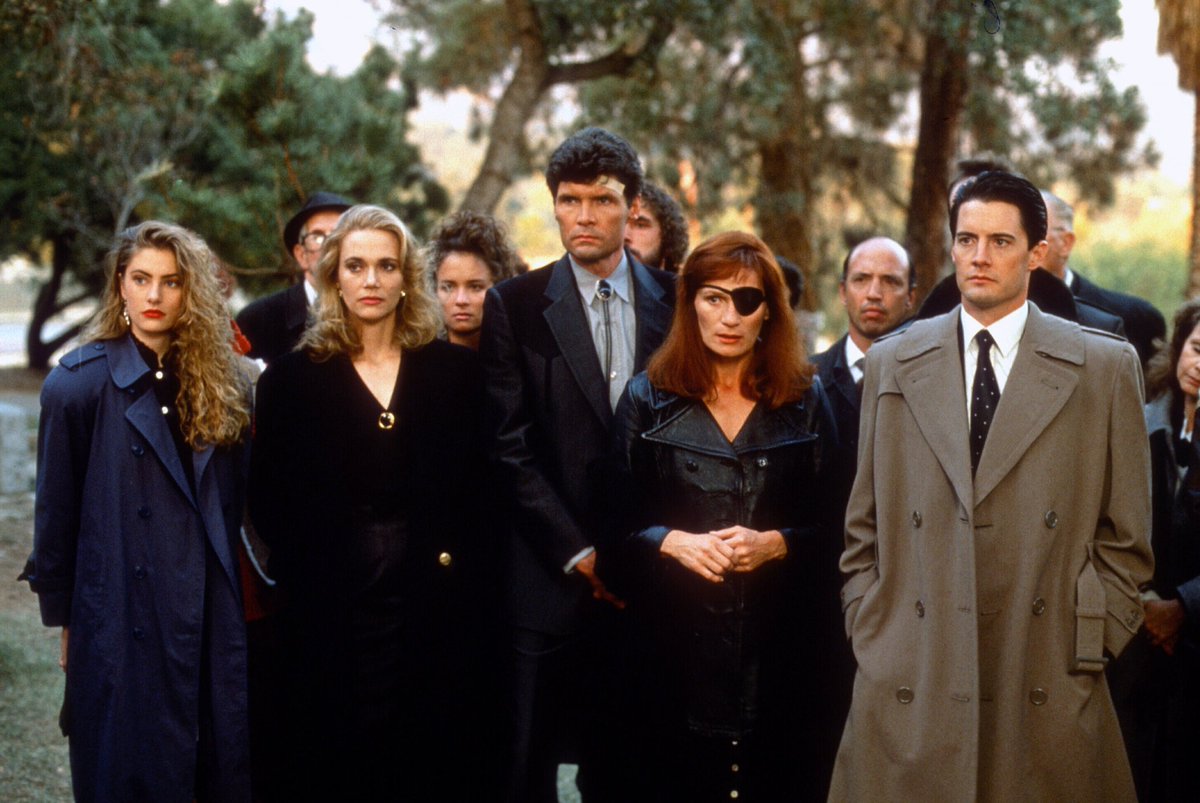 Pour yourself a cup of joe, cut a slice of cherry pie, and let your mind free to roam the surreal TV noir that could only have sprung from the mind of David Lynch. Twin Peaks changed our ideas of what kinds of stories and storytelling was possible on television, and it did so on a major television network years before HBO and AMC and FX pushed the envelope. It was a mystery, a soap opera, a supernatural fantasia, and a truly weird journey into the heart of darkness hidden in the shadowy wilderness and sleepy towns of the American heartland.

Kyle MacLachlan headlines as Dale Cooper, a charmingly eccentric FBI agent who brings his unconventional techniques (including psychic premonitions and dream-time clues) to the rural Washington State town of the title to solve the murder of high school girl Laura Palmer (Sheryl Lee), found “wrapped in plastic” on the banks of a river. Michael Ontkean is Sheriff Harry Truman, a straight arrow, salt-of-the-earth lawman with an easy manner, a devotion to his community, and an unwavering dedication to justice. Cooper takes to him immediately and the two dig into the secrets under the façade of what seems to be a tranquil small town nestled in the forests of the American frontier. But scratch the surface and you find extramarital affairs, drug dealers, sexual perversion, and pure psychic evil, along with high school melodrama, frustrated longings, Laura’s identical twin cousin, and a power struggle at the lumber mill between matriarch Catherine Martell (Piper Laurie) and Jocelyn Packard (Joan Chen), widow of the owner and heir to the fortune. The sprawling cast includes Richard Beymer as shady, somewhat sleazy business tycoon Benjamin Horne, Sherilyn Fenn as his seductive daughter Audrey (who secretly goes undercover to help out Cooper’s investigation), Peggy Lipton as the diner owner Norma Jennings married to a bullying husband (Chris Mulkey), Russ Tamblyn as a psychiatrist who could use a session or two himself, and Lynch favorite Jack Nance (Eraserhead himself) as a gentle soul who gets to utter some of the show’s most surreal lines (“Don’t drink that! There’s a fish in the coffee pot!”).

Lynch wrote the first three episodes with his co-creator Mark Frost and directed the feature-length pilot and the astounding third episode, which ends on the “red room” dream scene, the most mind-bending moment in American television up to that time.

After the first abbreviated season of eight episodes, Lynch returned to direct the feature-length second season debut. It’s filled it with the delirious details and strange moods that made the show such riveting TV, beginning with the painfully funny comedy of Agent Cooper maintaining his unfailingly polite cool while lying wounded and bleeding on his hotel room floor. But then Lynch and company reveal Laura Palmer’s killer and, under the guidance of writers/producers Harley Peyton and Mark Frost, the show slips from the most playfully, creatively strange show of its day to become merely strange in its spoof of soap opera tropes: amnesia, split personalities, alter egos, brain-dead villains roused back to life, perhaps even an alien abduction. Then, just when it seems to be running aground, Lynch returns for the series finale and brings back the metaphysical madness in a cliffhanger finale engineered to delight and distress in equal measure: a return to the red-curtain dream room that plays like a door-slamming chase turned into a supernatural game of tag with a wicked bite.

The guest cast includes Billy Zane, Michael Parks, Dan O’Herlihy, Jane Greer, Heather Graham (at the start of her career), Miguel Ferrer, Lynch himself as a hearing-challenged FBI boss who shouts every line, and pre-“X-Files” David Duchovny as a transvestite agent.

, iTunes, GooglePlay and/or other services. Availability may vary by service.
Twin Peaks: The Original Series plus Fire Walk With Me & The Missing Pieces [Blu-ray]

Sadly, this old lo-resolution TV promo is the best I can find for a trailer.

The “Definitive Gold Box Edition” DVD features both the feature-length pilot and the extended European cut with an alternate ending. Each episode features the “Log Lady Introductions” that were shot for subsequent syndicated showings (they don’t have anything to do with the episodes, but the philosophical musings are pure Lynch) and there’s a bonus disc with the feature-length documentary “Secrets From Another Place: Creating Twin Peaks,” which surveys the making and the unmaking of the show in the second season in four featurettes (“Northwest Passage: Creating the Pilot,” “Freshly Squeezed: Creating Season One,” “Where We’re From: Creating the Music” and “Into the Night: Creating Season Two), and the half-hour “A Slice of Lynch” featurette with David Lynch talking over a slice of cherry pie with actors Kyle MacLachlan and Mädchen Amick (who he calls “Madgekin”) and editorial assistant John Wentworth. It marks the first time Lynch has participated in a DVD supplement for the show. Also includes the featurette “Return to Twin Peaks” (a visit to the real shooting locations), an interactive map of the (fictional) town, clips from Kyle MacLachlan on “Saturday Night Live” in 1990 (including the “Twin Peaks” sketch), and “The Black Lodge Archive” with Japanese “Georgia Coffee” commercials (featuring MacLachlan and the cast in character), series promos, a music video and image galleries.

The show was remastered for Blu-ray in 2014 and released in a special edition that includes the big screen prequel Fire Walk With Me (1992), a longer version of the “A Slice of Lynch” featurette of the DVD “Gold Box,” new and previously unseen interviews and featurettes, more deleted scenes, and an hour and a half of deleted scenes and outtakes from Fire Walk With Me. Like the “Gold Box,” it has two versions of the pilot, “Secrets,” and cast and crew interviews, and it drops a few of the extras of the DVD (Kyle MacLachlan on SNL, Lynch’s “Georgia Coffee” commercials, and a Julee Cruise music video). The resolution of the newly-remastered Blu-ray, however, a big upgrade over the DVD presentation.

For completists, the original DVD release of Season 1 features commentary by episode directors (apart from Lynch, who has never recorded a commentary track and refuses to on principle) but not the pilot (it was a home video rights issue)