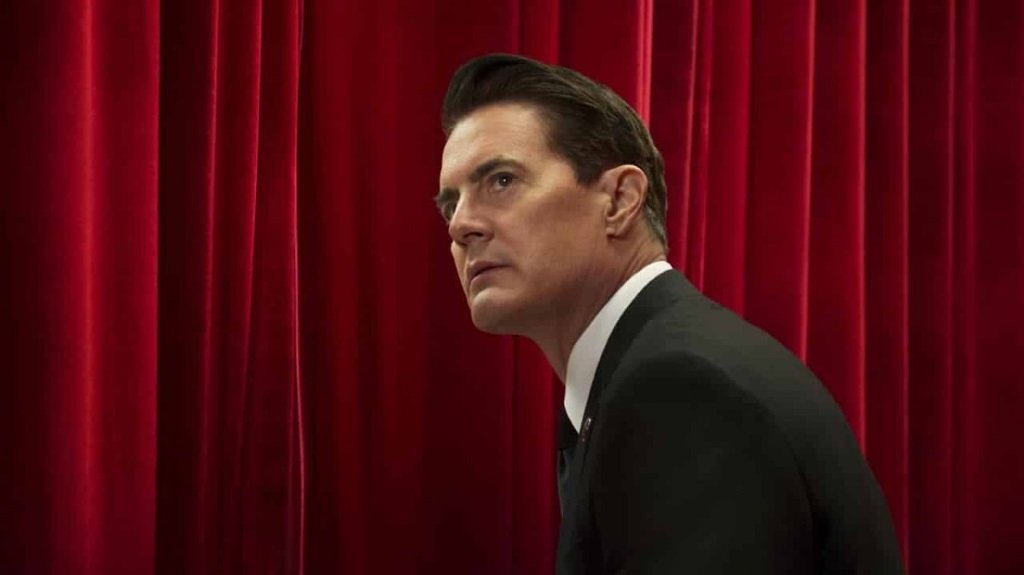 More than 25 years after the original Twin Peaks ended on network TV in 1990, creators David Lynch and Mark Frost were given complete freedom to produce a sequel series for Showtime. Almost every member of the original cast returned to reprise their characters (including a few characters from the feature-length prequel Fire Walk With Me) and Lynch directed and co-wrote (with Frost) all 18 episodes of Twin Peaks (2017), which picks up the story 25 years after the original series ended on a cliffhanger.

Kyle MacLachlan headlines the series and plays three roles: FBI Agent Dale Cooper (still trapped in the Black Lodge as the show opens), his Evil Cooper doppelganger (a vicious gangster in long greasy hair), and Dougie Jones, a corrupt Las Vegas insurance agent and screwed-up husband and father who is reborn as a saintly savant, barely functional yet a force of benevolence in a corrupt world who brings out the best in everyone he meets. This story sprawls beyond the Washington town of Twin Peaks, where Deputy Chief Hawk (Michael Horse) reopens the case of Laura Palmer (Sheryl Lee) after getting a call from The Log Lady (Catherine Coulson), for storylines in Vegas, South Dakota, New York City, Washington DC., and elsewhere, and Lynch returns as Gordon Cole to lead the Blue Rose investigation with his friend and colleague Albert (Miguel Ferrer). This is a show that takes its time, not just to tell a story but to settle into the worlds of wonder and horror and the mysteries that defy rational explanation. Lynch loves to celebrate the weird within the quotidian, the benevolent within the brutal, and he is a wonder at creating moods and casting spells over ordinary situations to make them extraordinary.

The show became a tribute to many of the stars of the original series—Miguel Ferrer (FBI Agent Albert Rosenfield), Catherine Coulson (The Log Lady), and Warren Frost (Doc Heyward) all passed away after shooting their scenes—and it was a treat to see such old favorites back, even if in small roles: Mädchen Amick as Shelly (still waitressing at the Double R Diner), Dana Ashbrook as Bobby Briggs (now a reliable deputy on the force), Russ Tamblyn as a bizarre self-help/conspiracy podcaster, Everett McGill as Big Ed Hurley, and Sherilyn Fenn as a very unhappy Audrey Horne.

Among the new cast members are Robert Forster as Sheriff Truman (brother of the previous Sheriff Truman), Don Murray as Dougie’s boss, singer Chrysta Bell as a junior FBI agent, Jenifer Jason Leigh and Tim Roth as Evil Cooper associates, and the previously unseen FBI assistant to whom Agent Cooper addressed all his audio memos and case files, appears in the flesh thanks to longtime Lynch veteran Laura Dern, and she’s nothing like you expect.

Like so many Lynch films, the new series is an enigmatic mystery with supernatural dimensions built around the struggle between good and evil, and the imagery is strange and creepy and wondrous. It confounded and frustrated some viewers but I found it amazing and absolutely unique, like an avant-garde film with a narrative that follows a strange but consistent logic and delivers images from the dream-like imagination of Lynch. There has never been anything else like it on TV.

18 episodes on 8 discs on Blu-ray and DVD, presented in a cardboard fold-out digipak in a very cleverly designed slipcase with the three faces of Kyle MacLachlan in the show.

Lynch doesn’t do commentary and he’s not a fan of it on his films. Neither does he talk about what his films mean. Yet he has a hand in the supplements produced for many of his disc releases and he fills them with some of the most interesting and unique bonus features you’ll find. This one is highlighted by “Impressions: A Journey Behind the Scenes of Twin Peaks,” an epic 10-part, nearly five-hour documentary that follows the production from the first to the final day of shooting. Narrated in a Werner Herzog-esque deadpan with oddball philosophical musings during the interstitial shots (beautiful widescreen shots traveling over and through landscapes), it takes us behind the scenes of every location and studio shoot (in chronological order, I assume) and shows us how Lynch works with actors (I love his talks right before a take), the crew members, and the producers. You can see how much he loves the creative process and how much love he extends to his collaborators. No wonder so many people come back again and again to work with a filmmaker with such a strange, mysterious vision.