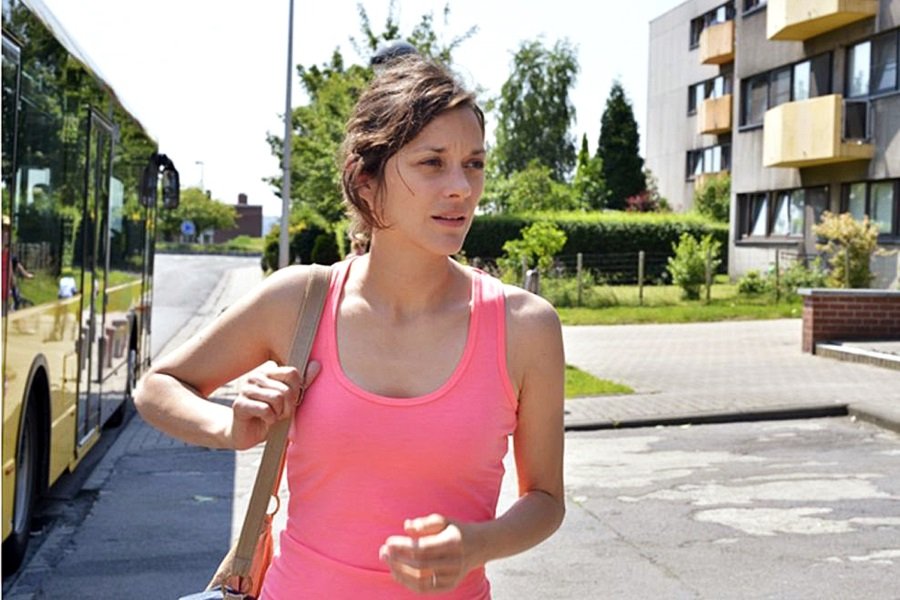 Jean-Pierre and Luc Dardenne developed their own stable of actors when they moved from documentaries to fiction films about working class folks and life on the margins of society—Olivier Gourmet and Jérémie Renier have both gone on to great success—but steered clear of working with major movie stars. Until Two Days, One Night, with bona-fide international superstar Marion Cotillard in the leading role.

Cotillard is more than a glamorous star, of course. She’s a superb actress with tremendous range—she won an Oscar playing Edith Piaf in La Vie en Rose and that was before American audiences really knew she was a screen beauty scuffing up her good looks for the portrayal–and she delivers a raw performance here as Sandra, a wife, mother, and blue-collar worker recovering from severe depression and fighting to keep her job at a small solar panel factory.

The premise is a little contrived. Sandra returns from medical leave, still fighting the lethargy and dispiritedness of her condition, to find herself the victim of downsizing. Her absence has convinced the manager that they can get by on a smaller staff and he leaves it up to her co-workers: they can choose to take a year-end bonus or welcome her back and the bonus goes to her salary. Kind of sadistic as a real-world tactic (especially considering the vote is taken by a show of hands, which puts a lot of pressure on the individuals) but a powerful metaphor for the use of conflict to shift focus from management to labor.

That’s just the lead up. It turns out the public vote, which goes overwhelmingly for the bonus, is illegal and a secret ballot is rescheduled, giving Sandra the weekend to convince her co-workers to change their votes, criss-crossing town on buses and in a borrowed car (driven by her supportive husband, played by Fabrizio Rongione), fighting her own sense of self-esteem to make a case for her employment at the expense of their (in many cases much-needed) bonus.

Sandra struggles just to keep her equilibrium in a situation that could douse to hope of the most well-equipped people and Cotillard superbly communicates her fragility, but it’s the conversations that create the drama. Not in terms of arguments or debates—though there are some of each—but the kind of honesty that comes out between people in difficult circumstances who have nothing to hide and everything to lose. It’s a portrait of people on the knife’s edge of survival and yet it has a hopeful message about communication and community and personal support. There’s no conventional happy ending here, which makes the little victories all the more profound, and Cotillard’s performance earned a second Academy Award nomination for the actress.

In French with some Arabic and English, with English subtitles.

, iTunes, GooglePlay and/or other services. Availability may vary by service.
Two Days, One Night [Blu-ray]

Criterion’s 2K digital transfer has been approved by directors Jean-Pierre and Luc Dardenne and the Blu-ray release features DTS-HD Master Audio 5.1 soundtrack. This edition is packed with supplements, including a number produced by Criterion for this release. A new video interview with Jean-Pierre and Luc Dardenne covers the inspiration, themes, and production of the film in a detailed talk that lasts over 50 minutes, and there’s an additional interview featurette, “The Dardennes on Leon M.’s Boat,” where they discuss their earlier documentary films. Actors Marion Cotillard and Fabrizio Rongione are interviewed separately in another featurette, discussing their preparation and performance. The 37-minute “On Location” revisits four key locations with the directors and uses split screens to show clips as they describe their process. Kent Jones contributes the 8-minute video essay “To Be an I,” which explores possible influences on the Dardennes.

There’s also an archival extra: the Dardenne’s second documentary When Léon M.’s Boat Went Down the Meuse for the First Time (1979), which is just under 40 minutes long and explored the general strike that shut down Belgium in 1960. It’s discussed in depth in one of the new interview featurettes. Finally, there’s a foldout leaflet with a new essay by film professor and film critic Girish Shambu.