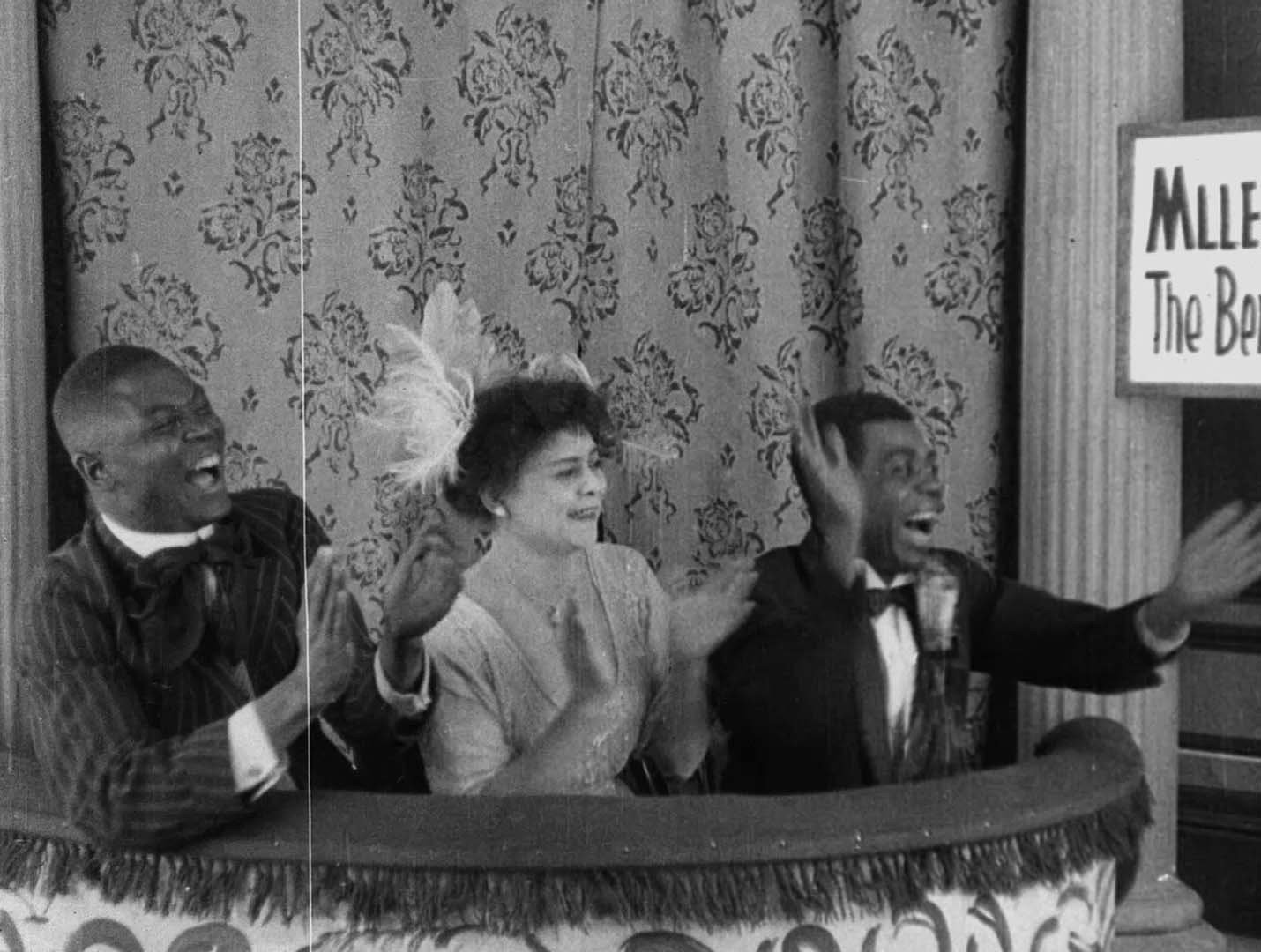 Among the earliest examples of films made by African-American entrepreneurs are a pair of slapstick comedy shorts featuring all-black casts produced for both black and white audiences by Luther Pollard for the Chicago-based Ebony Film Corporation. In Pollard’s own words (written in a business letter to a West Coast distributor), he intended to show that “colored players can put over good comedy without any of that crap-shooting, chicken-stealing, razor-dealing, watermelon-eating stuff that the colored people generally have been a little disgusted seeing.” He put black talent in leading roles and often parodied familiar stock characters in his short comedies.

Two buddies (Jimmy Marshall and Frank Montgomery) tossed out of a vaudeville revue put on their own stage show in Two Knights of Vaudeville (1918). The comedy short plays on some of the stereotypes that Pollard wanted to get away from; the intertitles are filled with mangled grammar and the hand-drawn signs and bills for their neighborhood show are rife with the misspellings and backwards letters you might see in a Little Rascals comedy. But if these guys are buffoons, their neighborhood audience knows it all too well and arrives prepared.

Mercy, the Mummy Mumbled (1918) pokes fun at both mad scientists and the Egyptian mummy craze that followed the discovery of King Tut’s tomb early in the 20th century. A young man wooing the daughter of a scientist hatches a get rich quick scheme when he spots a classified ad searching for “a mummy for experimental purposes.” While he wraps up a phony for the scientist, two Egyptian agents (outfitted in a crazy mix of ancient fashion and modern style) tracking stolen relics get tangled in the confusion. Director R.G. Phillips manages the many moving parts of this busy comedy quite deftly, and offers perhaps the last glimpse audiences will see of an African-American scientist on the screen for decades.

Mastered from the best available elements preserved at The Library of Congress, preservation came late to these films, which were independently produced and essentially orphaned after their theatrical runs. These presentations have not undergone extensive restoration. They have, however, been professionally mastered from the best existing materials, which mean that damage and wear is visible but there is clarity to the image. Do not expect pristine presentations. The films show the evidence of their respective tours of duty through the (mostly southern) “race films” circuit.

Also on Blu-ray and DVD and on SVOD through Amazon Video, iTunes, GooglePlay, Fandango, Vudu and/or other services. Availability may vary by service.
Pioneers of African American Cinema (5 Discs) [Blu-ray]