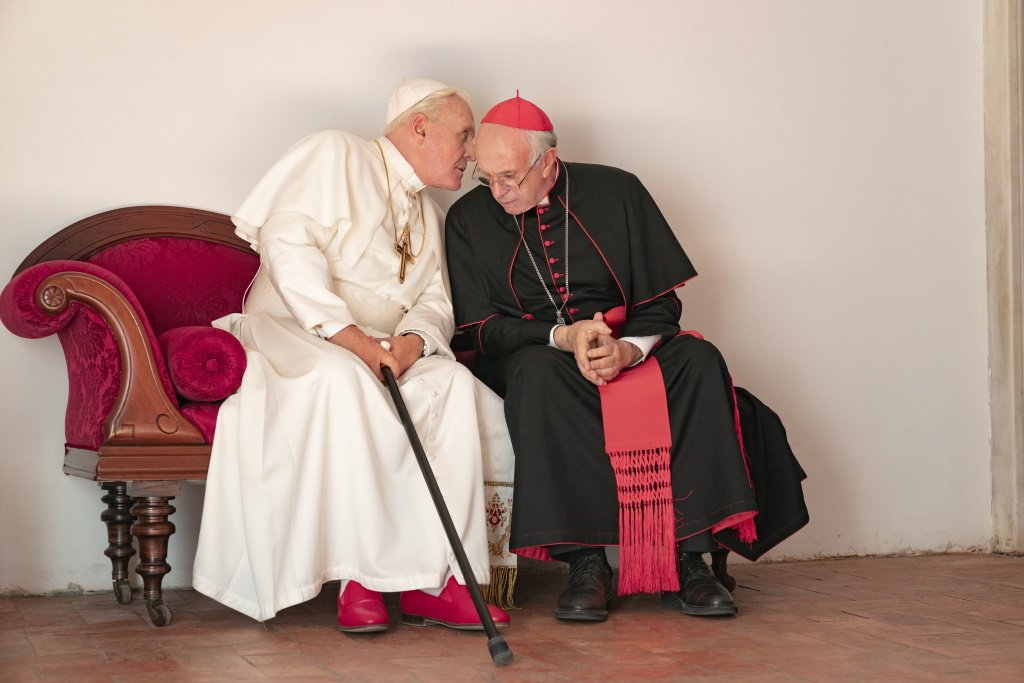 Anthony Hopkins is Pope Benedict XVI and Jonathan Pryce plays Jorge Bergoglio, the Cardinal from South America who became his successor, in “The Two Popes” (2019, PG-13), which dramatizes the debate-filled relationship between two men with shared faith but contrasting ideas. It comes to Netflix a week after playing theaters.

Jessie Buckley delivers a star-making performance as a passionate, reckless, single mother in rural Scotland who dreams of becomes a Nashville country singer in “Wild Rose” (2019, R). Tom Harper directs the rousing drama of a complicated young woman with dreams and talent beyond her blue collar world. Streaming on Hulu.

“The Aeronauts” (2019, PG-13) reunites “The Theory of Everything” stars Felicity Jones and Eddie Redmayne as a 19th-century daredevil balloon pilot and a stuffy scientist (respectively) who team up to push the boundaries of both science and ballooning. On Amazon Prime Video two weeks after theaters.

“The Witcher,” the new fantasy series based on the novels of Andrzej Sapkowski, stars Henry Cavill as a solitary monster hunter who teams up with a princess (Freya Allan) and a sorceress (Anya Chalotra) to save The Continent, a fictional medieval world of elves, gnomes, and magic. This is Netflix’s attempt to create its own “Game of Throne” franchise. Eight episodes streaming on Netflix.

“Downton Abbey” (2019, PG), the big screen sequel to the British TV series, was a surprise hit in the U.S. The thin story revolves around the aristocratic family and their team of servants preparing to host the King and Queen of England but mostly it’s an opportunity for fans to revisit the characters on a larger and more lavish canvas. The inclusiveness is both admirable and maddening, as it is so busy touching base with so many stories it doesn’t have time to develop any substantial relationships. Yet Maggie Smith still rules as the acerbic Dame Crawley, offering drops of wisdom and even warm insight between her withering comments. It’s less a movie than the greatest and grandest “Christmas Special” the series has ever offered. On Cable On Demand and VOD, also on DVD and at Redbox.

For kids, there’s the gentle animated adventure “Abominable” (2019, PG) about a friendly Yeti on a journey home.

Eddie Redmayne and Alicia Vikander star in “The Danish Girl” (2015, R), the Oscar-winning drama based on the true story of Danish painter Einar Wegener, who underwent experimental sexual reassignment surgery in the 1920s.

More streaming TV: “The Magicians: Season 4” (TV-MA) follows our young heroes in a world without magic as they regain their memories and go on a quest to open the magic wellspring once again.

International TV: a jilted lover has a second chance to get it right in “Twice Upon a Time: Season 1” (France, not rated, with subtitles), a romantic drama with a time travel twist. Also new:

True stories: “After the Raid” (2019, not rated) look in at a churchgoing community in a small southwestern town after an immigration raid.

Hulu now streams the first four film in the unexpected hit action franchise launched with “The Fast and the Furious” (2001, PG-13), starring Vin Diesel as an outlaw street racer and car thief and Paul Walker as an undercover FBI agent. Sequels “2 Fast 2 Furious” (2003, PG-13) and “The Fast and the Furious: Tokyo Drift” (2006, PG-13) didn’t connect but Justin Lin tuned up the series with the fourth film “Fast & Furious” (2009, PG-13), which finally reunited Diesel and Walker and gave birth to the heist-oriented series that has become so popular.

Streaming TV: the most entertaining love-hate relationship on TV continues in “Killing Eve: Season 2” (2019, PG-14), with Emmy-nominated Sandra Oh as an agent for British Intelligence and Emmy-winner Jodie Comer as a gleefully ferocious assassin.

True stories: “Cold Case Hammarskjold” (2019, not rated) digs into the death in 1961 of the United Nations Secretary General and uncovers what may be an insidious conmspiracy.

David Harbour dons the sawed-off horns as “Hellboy” (2019, R) in the violent reboot of the comic book series directed by Neil Marshall.

True stories: “Finding the Way Home” (2019, TV-PG) follows the journeys of eight children from orphanages to happy homes while the more lighthearted “Well Groomed” (2019, TV-G) looks into the culture of competitive dog grooming.

Viggo Mortensen is an Italian-American bouncer who signs on as driver and bodyguard to African-American jazz musician Dr. Don Shirley (Mahershala Ali) in his tour through the deep South in “Green Book” (2018, PG-13), which took home Academy Awards for best picture, original screenplay, and supporting actor Ali.

The third season of the Canadian comedy “Slings & Arrows” is now on Acorn TV, making the entire, bingeworthy series available to stream over the holidays.

The documentary “This Changes Everything” (2018, not rated) takes on gender disparity in Hollywood. Now streaming on Starz.

Criterion Channel presents thirteen films “Starring Juliette Binoche,” including the Criterion Channel debuts of “The Unbearable Lightness of Being” (1988, R) with Daniel Day-Lewis, Leos Carax’s ravishing romantic epic “The Lovers on the Bridge” (France, 1991, not rated, with subtitles), and “Elles” (France, 2011, not rated, with subtitles) from filmmaker Małgorzata Szumowska.

Also new this month are three early films from French filmmaker Céline Sciamma, the director of Golden Globe nominee “Portrait of a Lady on Fire,” all focused on the lives of rebellious girls and young women: “Water Lilies” (2007), “Tomboy” (2011), and “Girlhood” (2014) (all not rated, in French with English subtitles).

For my money, the great Christmas movies are on Criterion Channel this year. James Stewart and Margaret Sullivan spat until they fall in love in “The Shop Around the Corner” (1940), a smart and sentimental tale from Ernst Lubitsch set in old Vienna but pure Americana. Preston Sturges turns the virgin birth on its head in “The Miracle of Morgan’s Creek” (1944), a wartime screwball comedy with wild energy and a Christmas twist. Christmas is bittersweet in the French musical romance “The Umbrellas of Cherbourg” (France, 1964, with subtitles) with Catherine Deneuve and it is the brief moment of childhood joy in Ingmar Bergman’s epic “Fanny and Alexander” (Sweden, 1982, with subtitles). And for a dysfunctional family Christmas, join Catherine Deneuve and Mathieu Amalric in Arnaud Desplechin’s “A Christmas Tale” (France, 2008, not rated, with subtitles).

Shudder debuts the award-winning gangster thriller “Trevisa” (China, 2016, with subtitles), produced by crime master Johnnie To. And for Christmas, there’s the cult action-horror film “Game Over” (France, 1989, with subtitles), which anticipates “Home Alone” with a resourceful child taking on a psycho Santa, though this one is played for horror.