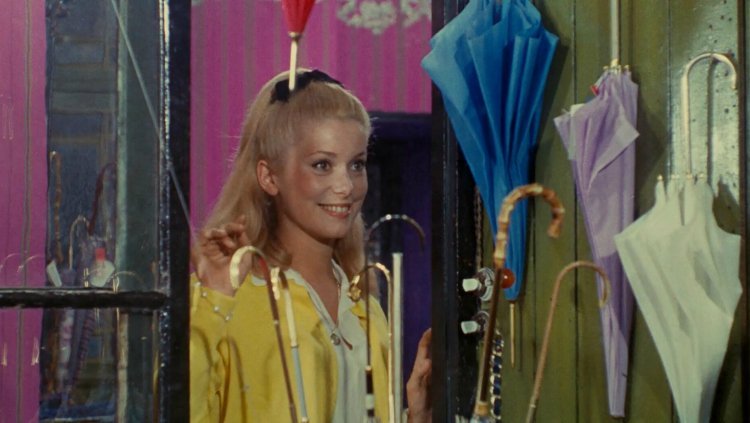 Jacques Demy, the most romantic of the French nouvelle vague filmmakers, loved American movies, especially musicals, but his taste for American musicals and candy-colored romance was balanced with a bittersweet sensibility. For all the energizing music and dreamy love affairs, his romances more often than not don’t really get happy endings. Kanopy presents these essentials.

The Umbrellas of Cherbourg (France, 1964) is a genuine Technicolor musical, one that is entirely sung from a libretto by Demy set to Michel Legrand’s famed score. Catherine Deneuve, looking so young it’s hard to believe she matured into Belle de Jour just a few years later, and fresh faced Nino Castelnuovo are young lovers separated by the Algerian war and the complications of life.

The candy colored sets suggests the great Hollywood musicals: bright, clean, a utopian world, but with a distinctly French flavor. Instead of elaborate numbers we get intimate staging where every movement becomes like a dance, and in place of a traditional happy ending is a realization of how circumstances, compromises and life itself take us in different directions.

It was nominated for five Academy Awards and won the Palme d’Or at Cannes.

The Young Girls of Rochefort (France, 1967) takes a brighter approach—it all takes place in the sun-drenched provincial town of Rochefort—and a more traditional approach to the musical itself. Deneuve co-stars for the first and only time with her real-life sister Françoise Dorléac (they play cinematic siblings looking for love in the excitement of a summer weekend fair) and George Chakiris and Hollywood dancer Grover Dale are the young boys who woo the young girls through dance. Echoing these innocent romantic flirtations are Michel Piccoli and Danielle Darrieux as long lost lovers searching for their past in a world of deep, glowing colors.

From its opening jazzy dance on a ferry, which becomes a veritable magic carpet floating above a sparkling river before the scene is over, it’s a delight. And Demy tips his hat to the grand old musicals of Hollywood with an appearance by Gene Kelly.

Both are in French with English subtitles and in vibrant color.

Streaming on HBO Max and Criterion Channel and free on Kanopy, which is available through most public and college library systems.

and The Young Girls of Rochefort

), iTunes, GooglePlay and/or other services. Availability may vary by service.
The Essential Jacques Demy [Blu-ray + DVD]

The Umbrellas of Cherbourg (The Criterion Collection) [Blu-ray]

The Umbrellas of Cherbourg (The Criterion Collection) [DVD]

The Young Girls of Rochefort (The Criterion Collection) [Blu-ray]

The Young Girls of Rochefort (The Criterion Collection) [DVD]

The supplements are superbly curated and we can probably thank Agnes Varda, Demy’s widow and a fellow Nouvelle Vague filmmaker with a magnificent career in her own right, for a lot of it. She collaborated on the restorations and contributed two documentaries she made on Demy: The Young Girls Turn 25 (1993) and The World of Jacques Demy (1995). There’s a small library of archival TV programs on the films, including the 2008 documentary “Once Upon a Time… The Umbrellas of Cherbourg,” and interviews with the filmmakers and actors involved on the various films.

The highlight of the original supplements produced for this collection is the hour-long “Jacques Demy, A to Z,” a visual essay by James Qaundt that takes stock of the director’s influences and inspirations. There is also a video conversation with Demy biographer Jean-Pierre Berthomé and costume designer Jacqueline Moreau and new interviews with author Marie Colmant and film scholar Rodney Hill and short featurettes on the restorations of four of the features on the set. The booklet includes essays on each of the films by critics Ginette Vincendeau, Terrence Rafferty, Jim Ridley, Jonathan Rosenbaum, Anne Duggan, and Geoff Andrew, with a postscript by Demy biographer Jean-Pierre Berthomé.