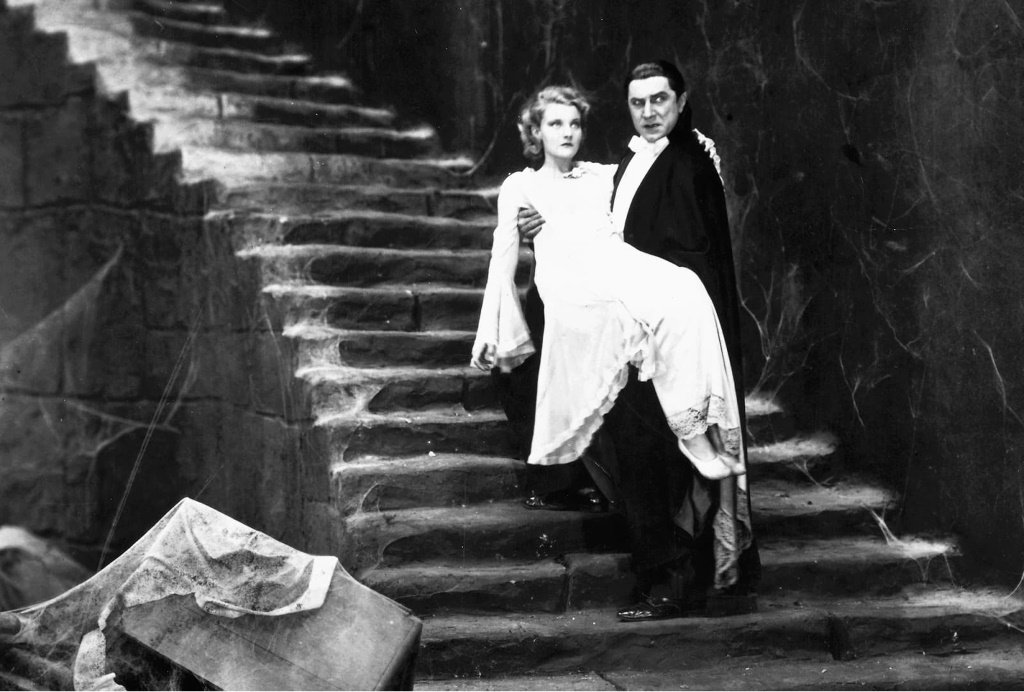 The great monsters of horror were first defined for the movies almost 100 years ago at Universal Studios when they ushered in the golden age of American horror cinema. They weren’t the first horror movies and they weren’t even the first adaptations of the literary horror classics but they took hold of the public’s imagination, became hit movies, and spawned both a genre and a universe of fantastical characters who coexisted.

Yes, decades before the Marvel Comics movie universe was born, Frankenstein and Dracula and the Wolf Man crossed paths, teamed up, and battled one another.

That wasn’t the plan to begin with.

It all began to with Tod Browning’s classic Dracula (1931) which made Bela Lugosi the most famous vampire in the movies. It may be creaky, stiff, and often stagy but the first official adaptation of Bram Stoker’s novel will remain memorable for its gorgeous gothic images, for Lugosi’s legendary, iconic performance, and for setting off the cinematic fascination with vampires. It may not be the definitive version, but it’s easily the most famous, a veritable cultural touchstone.

James Whale’s original Frankenstein (1931), with Boris Karloff as Mary Shelley’s tormented creature (he took the role after Bela Lugosi turned it down), is the granddaddy of modern monster movies. The film buzzes to life in the magnificent laboratory “birth” scene, a moment of modern gothic glory, and if it never quite maintains that charged atmosphere it builds to a marvelous climax with angry torch carrying villagers and a fiery windmill inferno. Colin Clive is a twitchy, intense Dr. Frankenstein, mad with ambition and arrogance, but its heart belongs to Karloff’s haunted, childlike monster, whose plight never fails to move me.

Universal hit upon a winning formula—the old world gloom of rural European settings and superstitions versus the can-do pluckiness of modern American heroes—and quickly solidified its hold on American horror cinema with such classic monsters as The Mummy and The Invisible Man and Edgar Allan Poe adaptations like Murders in the Rue Morgue and Edgar Ulmer’s stunningly designed The Black Cat through the 1930s. But they kept returning to the well on these two characters and added another in 1941: The Wolf Man. Lumbering Lon Chaney Jr.’s tortured portrayal of the good man cursed to turn into a savage killer every full moon helped transform the studio’s second werewolf film, into a classic. (The first was The Werewolf Of London with Henry Hull in 1935.) The film itself is a bit lumbering too, even at 70 minutes, but the star studded cast—Claude Rains as his European father, William Warren and Ralph Bellamy as Rains’ best friends, and, most memorably, Maria Ouspenskaya as a gypsy woman who reveals his curse and Bela Lugosi as a fellow cursed soul—gives the B movie material a theatrical sheen and the gothic gloom of misty forests and moonlit nights provides all the necessary mood.

But the return visits began years earlier, starting with Bride of Frankenstein (1935), a delirious sequel that tops the original. Karloff speaks and Elsa Lanchester hisses under a shocking hairdo but Ernest Thesiger almost steals the show as the droll Doctor Pretorious. It’s the pinnacle of Universal horror: the quintessential mad scientist laboratory sparks back to life for a horror tale both poignant and black humored.

When Lugosi refused to return as Dracula, Universal came up with Dracula’s Daughter (1936), a sleek, stylish horror picture that actually opens on the last scene from Dracula, then turns into the tale of his aristocratic “daughter” (the continental Gloria Holden), who is seeking a cure for her affliction. The cut rate knock-off is actually quite elegant, even if it too often loses the mood in an over-busy plot. Holden’s haunted face and willowy body cuts a striking figure and Irving Pichel’s offbeat servant is like an American gangster with the breeding of a European aristocrat: thick, thuggish, but always proper. Edward Van Sloan reprises his role as Van Helsing and Otto Kruger and Marguerite Churchill co-star.

Boris Karloff makes his final appearance as the monster in Son of Frankenstein (1939), revived by the Frankenstein heir (Basil Rathbone) and a twisted, vengeful Ygor (played by Bela Lugosi with a sinister malevolence) and taught to speak. Lionel Atwill co-stars as the one-armed constable out for vengeance against the creature who crippled him (Mel Brooks lampooned him wonderfully in his loving parody Young Frankenstein). It lacks the gothic splendor and macabre humor of James Whale’s originals, but Rowland V. Lee’s handsome production remains an intelligent, well-made classic of the genre and Universal’s last great Frankenstein film.

It was also the last time Universal paid any attention to continuity. A hallmark of the big screen Marvel Comics Universe is the way the stories have been carefully plotted out across multiple movies. The Universal Horror series was basically made up on the fly, with a rotating cast of actors taking over iconic roles and past history rewritten or simply ignored as the movies were relegated to the B-movie units and rolled out on increasingly smaller budgets.

Bela Lugosi returns as Ygor in Ghost of Frankenstein (1942), with Sir Cedric Hardwicke as another Frankenstein son and Lon Chaney Jr. donning the monster’s make-up. The gothic mood and moral quandaries of the 1930s films are given up for good here, replaced by a tangle of scheming plots interspersed with action highlights, including not one but two attacks by angry villagers! My favorite scene, however, is the Monster’s all-natural method of rejuvenation: he practically orgasms on a jolt of lightning during an electrical storm. Universal horror veterans Ralph Bellamy, Lionel Atwill (this time as a fellow doctor), and Evelyn Ankers co-star.

And Chaney completes his tour of duty in the classic monster triumvirate as Son of Dracula (1943), a Carpathian aristocrat by the name of Count Alucard (spell it backwards), invited to the US by heiress Louise Allbritton, who is searching for the key to immortality. Set in the Deep South, it’s an inspired melding of moods and plays like a supernatural psycho-thriller, where the visions of a jilted lover gone stark raving only complicate the issue. Only the clumsy antics of the skeptical cops and the plodding exposition spouted by an old Carpathian doctor (he just happens to be the local MD) get in the way of this moody minor horror gem.

The 1940s monsterpalooza really begins with Frankenstein Meets the Wolfman (1943) featuring Bela Lugosi in the neck bolts and platform boots playing Frankenstein’s Monster for the first and only time and Lon Chaney, Jr. returning to the role that made his fame: Larry Talbot, the man cursed to become a werewolf every full moon. (There’s no explanation as to how he’s back after seemingly killed at the end of The Wolf Man.) Talbot is searching for Dr. Frankenstein but instead finds the Monster, frozen in ice beneath the castle, and an ambitious scientist (Patric Knowles) who revives the creature and promises to cure Larry. Lugosi is lurching and clumsy as the Monster, while Chaney is appropriately tortured as Larry but stiff and snarly as the Wolf Man, more man than wolf. Last minute cuts by the studio renders much of the film incomprehensible: while the monster was left blind at the end of Ghost of Frankenstein, he’s now sighted but mute and all explanation were deleted (which partly accounts for Lugosi’s performance). Roy William Neill, a talented B movie director best known for the his Basil Rathbone Sherlock Holmes films, can’t do much with the perfunctory script but he does deliver a highly entertaining conclusion: the Wolf Man battles the Monster while a spectacular natural disaster comes crashing down on them.

House of Frankenstein (1944) increased the character count of Universal’s all-star monster tag-team bouts with Dracula, the Wolf Man, Frankenstein’s monster, plus a menacing mad scientist (played with hammy glee by Boris Karloff) and his hunchbacked assistant (J. Carroll Naish). It’s really more like two films. Karloff and Naish resurrect the dapper vampire (played by a dignified John Carradine) and unleash him on an unsuspecting town, then leave to investigate the ruins of Castle Frankenstein where they find the frozen bodies of the Wolf Man (Lon Chaney) and the Monster (Glenn Strange in his first of three turns in the role). The screenplay has a slapdash quality about it and the direction only rises above perfunctory for the conclusion, a mad monster brawl with some arresting moments.

John Carradine dons the cape for a second time in House of Dracula (1945) and plays host again to Larry Talbot/The Wolf Man (Lon Chaney Jr.), still looking for a cure, and Frankenstein’s Monster (Glenn Strange), still being forever resurrected. This one is even more slapdash, an overstuffed screenplay that features Onslow Stevens in the mad scientist role attempting to cure both Dracula and The Wolf Man and ends up in a Jekyll and Hyde twist on vampirism thanks to a blood transfusion mishap. It’s a mess yet it has its charms, as well as Lionel Atwill recalling his past Universal roles as a constable looking into the killings.

The last gasp came in the unlikely comic tribute/spoof Abbott and Costello Meet Frankenstein (1948), the funniest horror comedy of the classical era. Dracula (Bela Lugosi, in his second and last incarnation of his star making role), the Monster (Glenn Strange), and the Wolfman (Lon Chaney Jr.) are straight men to Costello’s stuttering double takes and vaudeville goofiness. To the credit of director Charles Barton, he has the horror actors play the parts as if in a legitimate horror movie while Costello sputters and whoops about in a panic. It’s a wonderfully entertaining and genuinely creepy film that nonetheless proved to be the final nail in the coffin for Universal’s increasingly cheap monster series, spawning a slew of horror comedies that transformed the gothic creatures into icons of camp.

The classic horror monsters gave way to science fiction in American movies in the 1950s and it took Hammer Films in England to revive the great horror icons in a series of lurid, Technicolor Gothic horrors, but they too gave way to a new breed of horror in the modern world: Psycho, The Night of the Living Dead, The Texas Chainsaw Massacre, and the bio-horror of David Cronenberg.

They’ve never really gone away as filmmakers continue to revive and reinvent the classics, but aside from such TV programs as Penny Dreadful, no one has woven them into the same world again the way Universal did back in the golden age of movie monsters.

All in black and white

Also on Blu-ray and DVD and on SVOD through Amazon Video, iTunes, GooglePlay, Fandango, Vudu and/or other services. Availability may vary by service.
Universal Classic Monsters: Complete 30-Film Collection [Blu-ray]