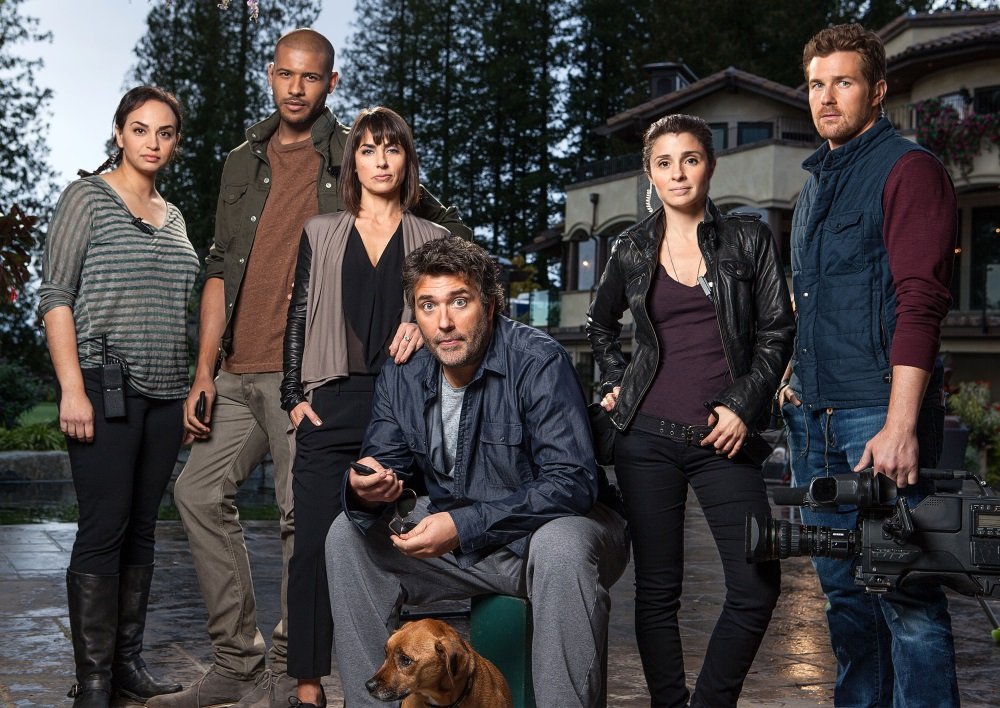 An acidic satire of reality TV and the cutthroat business of manufacturing entertainment, UnREAL: Season One, created for the Lifetime Network, is set behind the scenes of a Bachelor-like show (here called Everlasting) where producer Quinn King (Constance Zimmer) engineers conflict to manufacture the kind of showy drama that keeps viewers returning week after week. Shiri Appleby stars as production assistant Rachel Goldberg, a former employee whose on-set meltdown (and subsequent arrest after driving off and crashing a company car) during the finale last year has made her infamous. Her return to the show as a freelance production assistant is as much necessity—she’s broke and desperate to put her life-sabotaging actions behind her—as extortion. Producer Quinn won’t drop the charges, but she will sponsor her probation in return for taking up the old job that drove her to a nervous breakdown. Appleby, once the dewy-eyed innocent of Roswell, enters UnREAL with the tired look of a woman resigned to a job that is killing her.

That pretty much sets the stage for everything that happens behind the scenes of the reality dating show, in which a dozen or so contestants compete for a handsome young British bachelor (Freddie Stroma), the show’s shallow, self-involved Prince Charming and heir to a hotel fortune. He’s only there to rehabilitate a tarnished image and drum up publicity for his next business venture, and Rachel uses that to bring him in as a co-conspirator to steer the narrative in return for helping his self-promotion. While there is a kind of catty competitiveness between the women, the real drama is behind the camera where Quinn and her team conspire to bring out the worst behavior in the contestants, and no one is better at that kind of mind games and psychological manipulation than Rachel. It also makes her miserable to be so heartless and manipulative and she’s ready to take any lifeline out of there.

Created by Marti Noxon (a veteran writer-producer whose resume includes Buffy the Vampire Slayer, Mad Men, and Glee) and Sarah Gertrude Shapiro (a war-scarred veteran of the actual The Bachelor), it’s less a parody of reality TV than a scathing satire of the entire culture surrounding it. It also takes on issues of sexism and the position of women professionals in the entertainment industry. Quinn is the engine that drives the show but it’s owned by a coke-snorting, philandering man (Craig Bierko) who has connections and a gift for schmoozing network executives but no talent for actual producing, and she gets neither the recognition nor the creative control she’s earned. That the show slips this in as simply another dimension of the moral black hole of the show’s universe is part of why it’s such a damnably entertaining show.

This is bad behavior at its most cruel and the worst is behind the scenes. The producers play on the weaknesses of the contestants (with the help of a psychological profile generated for the producers) to nudge them into emotional explosions and generate acts of humiliation for the entertainment of TV viewers. And it’s not all played for dark humor. Halfway through the series, one assistant crosses the line into criminal behavior and the result is fatal. And unpunished. There’s little justice anywhere in the show, but there is a little compassion, a little genuine guilt, and once in a while a satisfying act of defiance that allows the characters, all contractual prisoners in their own way of this insular world, to reclaim a little sense of self-esteem and autonomy.