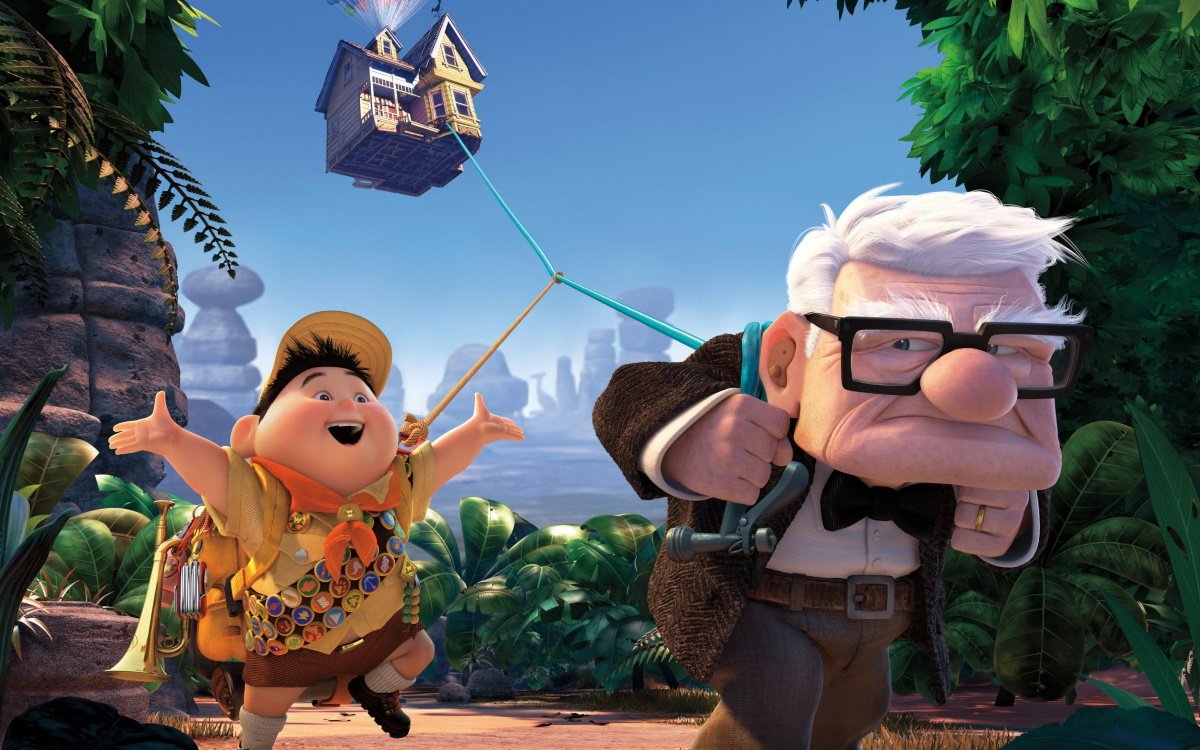 One of the most tender, touching and deftly told love stories of the 21st century so far is in the opening few minutes of Up (2009), a wordless survey of a lifelong romance that plays out between the meeting of two adventure-hungry children and the lonely sunset years of the widowed husband decades later, the happiness gone with the death of his wife.

That’s just the prologue but it communicates the depth of emotion and devotion and need that will continue to reverberate behind the comic comments and outlandish fantasy adventure.

The animated adventure from directed by Pete Docter (Monsters, Inc.) and written by Bob Peterson (Finding Nemo), is a journey movie, but this one is undertaken by a senior citizen determined to complete that odyssey into the unknown he was never able to give to his wife. Ed Asner voices Carl, whose steam-shovel jaw and gravel voice gives him the look and manner of a sour curmudgeon. Jordan Nagai is Russell, the almond-eyed Wilderness Explorer Scout who gets whisked away with Carl when he lifts his home out of its urban foundation with a gazillion toy balloons.

Up is a film of whimsy and wonder, mixing Jules Verne imagination with the bubble-gum colors of a children’s picture book and Pixar’s trademark bouncy humor, all stirred with memories of childhood dreams. Plus a playful prehistoric bird and an overenthusiastic talking dog named Dug, instantly one of the all-time great screen dogs, to boot!

But for all the wonders of the imagery and the amazing exploits, director Pete Docter and his Pixar team are storytellers and this is a lovely story about lonely outcasts who create their own family and start their own adventure.

Sure, you can see where this is going, but the trip is remarkable. Docter and his Pixar team are marvelous storytellers. They slip whimsy and wonder between the humor and the adventure while Carl slowly shrugs off his regret and self-pity and pulls the lonely outcasts together into a new family to start a new adventure. Ellie would be smiling.

It won Academy Awards and BAFTAs for animated feature and Michael Giacchino’s original score, plus scores of awards from other critics groups and other organizations.

Also on Blu-ray and DVD and on SVOD through Amazon Video, iTunes, GooglePlay, Vudu and/or other services. Availability may vary by service.
Up [Blu-ray]
Up [DVD]
Up [Five-Disc Combo: Blu-ray 3D/ Blu-ray/ DVD + Digital Copy]
Up [4K UHD + Blu-ray]

Both the DVD and Blu-ray editions feature commentary by director Pete Docter and co-director Bob Peterson, the featurette “Adventure is Out There” on the production crew’s own trip to South America and the real-life table-top mountains that become the film’s destination, and two exclusive animated shorts: “Partly Cloudy,” which preceded the film in theaters, and “Dug’s Special Mission,” an affectionate Looney Tunes-esque piece that turns into a delightful prequel of sorts. Exclusive to the Blu-ray is a collection of short but always interesting featurettes on the inspirations for the main characters and other animated elements. It’s not just a glimpse into the research that the animators and producers have done, it illustrates how their discoveries translate into onscreen imagery and personality.