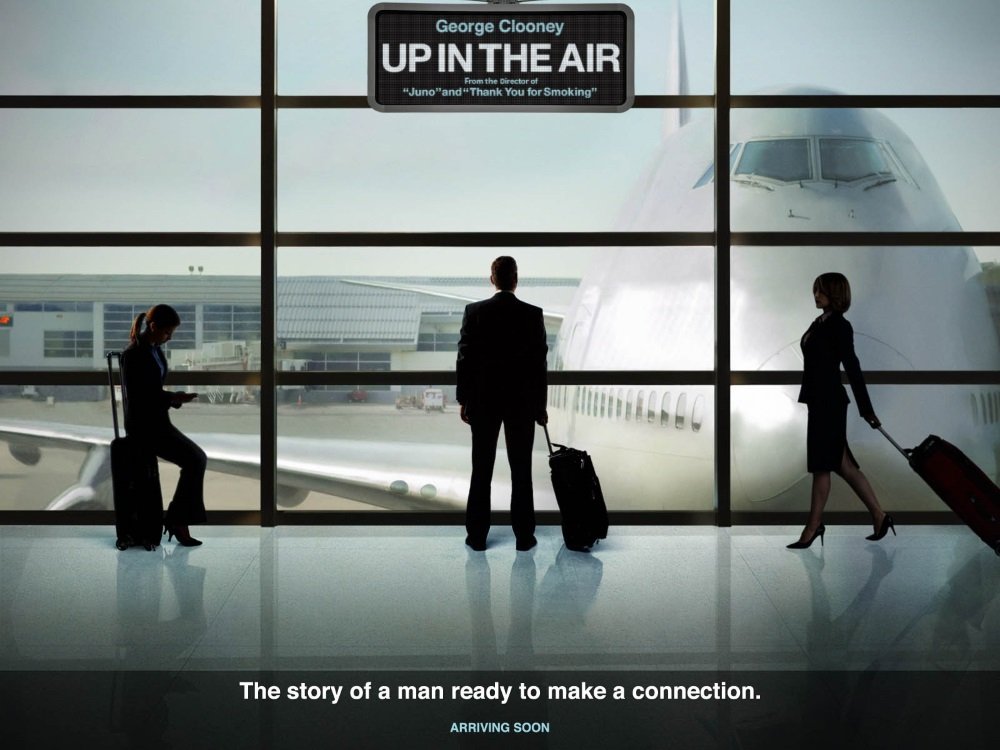 “To know me is to fly with me,” proclaims philosopher-in-flight Ryan Bingham. “This is where I live.” And it’s clear in the opening moments of Up in the Air (2009) as Ryan—as played by George Clooney—walks through the airport, perfectly at home as checks in to the preferred customer counter and eases through security with a practiced routine. It’s not simply familiar, it’s ritual.

Technically a “career transition counselor,” Ryan is a hatchet man for hire, forever flying to some forlorn company to fire employees for bosses who are too timid or intimidated to do it themselves. Ryan may take no pleasure in the act but he loves his job (and his accumulating frequent flyer miles). He’s a 21st century traveling man who has trimmed his existence down to what can be packed into carry-on luggage and turned business class seating and the impersonal austerity of airport lounges and hotels into his comfort zone. He’s spent so much time passing through life that he treats relationships like layovers: a brief, impermanent stop on a never-ending journey. Pick your own metaphor. Ryan calls it “the empty backpack” and he’s even turned it into a side career as a motivational speaker.

He’s not so comfortable mentoring Natalie (Anna Kendrick), a business school grad with lots of ideas for advancing the company but little practical experience in making people and plans actually work, in the ways of the company, taking her along on his jobs and teaching her the ropes.

Where Up in the Air soars is in the way it captures Ryan’s rhythm, the elegant precision of his comforting ritual, the smooth familiarity of his life-in-transition existence. Clooney uses his trademark charm and easy confidence to create a character who skates along the surface until a connection with a sexy and smart fellow traveler (Vera Farmiga) starts him thinking that “Everyone needs a co-pilot” (a revelation as sales pitch). But the film also taps into the pulse—and the anxieties—of our precarious times, and it gives a voice to the victims of downsizing and streamlining that go through Ryan’s assembly line counseling. Clooney and director Jason Reitman make this cultural snapshot as existential odyssey funny and wry and bittersweet and ultimately painfully, tenderly human.

It was nominated for six Academy Awards, including Best Picture, Best Director, and acting nods for all three stars, and awarded Best Picture of 2009 by AFI and a lot of film critics organizations.

Also on Blu-ray and DVD and on SVOD through Amazon Video,  iTunes, GooglePlay, Vudu and/or other services. Availability may vary by service.
Up in the Air [DVD]