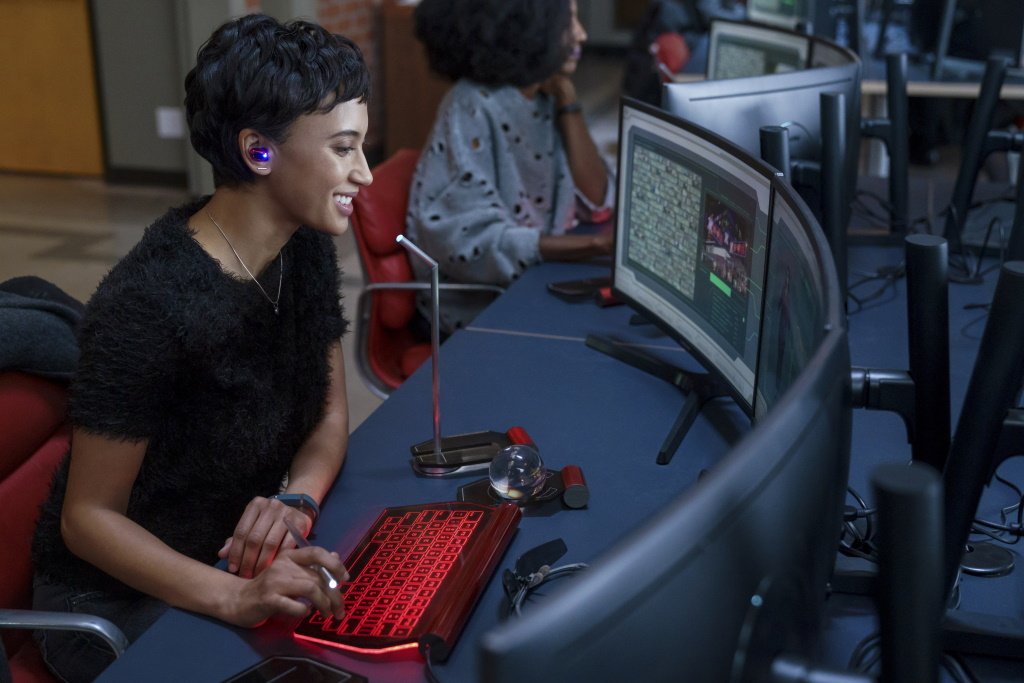 Robbie Amell plays a young programmer who ends up in a virtual afterlife after a freak accident and Andy Allo is his personal “angel” guiding his journey in “Upload” (2020, TV-MA), a sci-fi comedy series from “The Office” creator Greg Daniels. It’s a raunchy satire of a world where advanced technology serves base human desires, death is monetized, and people still suffer from the same existential questions in both life and afterlife. 10 episodes on Amazon Prime Video.

Mindy Kaling draws from her life growing up Indian-American in “Never Have I Ever” (TV-14), a high school comedy about a teenage girl, Devi (Maitreyi Ramakrishnan), who attempts to remake her image and popularity. 10 episodes streaming on Netflix.

“Hollywood” (TV–MA) follows an aspiring actor (David Corenswet) as he tries to break into the movies in the 19940s. The limited series created by Ryan Murphy and Ian Brennan mixes history, fiction, and speculation as it trolls the underbelly of show business. Darren Criss, Patti LuPone, Jeremy Pope, Laura Harrier, and Samara Weaving costar. 7 episodes streaming on Netflix.

“Normal People” (2020, not rated), based on the novel by Sally Rooney, follows two Irish teens (Daisy Edgar-Jones and Paul Mescal) as they drift in an out of love over five years. All 12 episodes of the romantic drama, directed by Lenny Abrahamson (“Room”) and Hettie Macdonald (“Howard’s End”), stream on Hulu.

Amazon Prime Video presents an online version of the SXSW Film Festival featuring a streaming collection of documentary and narrative features, short films and episodic titles available free for subscribers through May 5. Among the features are the comedy-drama “Cat in the Wall” from England, urban thriller “Gunpowder Heart” (Spain, with subtitles), and “The Choc de Futur” (France, with subtitles), a drama set in the music industry of 1978 Paris.

Free pick: Benedict Cumberbatch and Jonny Lee Miller alternated the roles of Victor Frankenstein and his creation in Danny Boyle’s 2011 stage production of “Frankenstein” (not rated). Both versions available on the National Theatre YouTube channel free for one week only.

“Sonic the Hedgehog” (2020, PG), the cartoonish video game adaptation with James Marsden, Jim Carrey, and the voice of Ben Schwartz, is available for families and the thriller “The Rhythm Section” (2020, R) with Blake Lively and Jude Law is new for older audiences. Both also on DVD and at Redbox.

Available direct to VOD is “Bull” (2020, not rated), a drama about an aging rodeo bullrider (Rob Morgan) and a troubled teen that played Cannes & SXSW film festivals, and the animated thriller “Mortal Kombat Legends: Scorpion’s Revenge” (2020, not rated), based on the video game.

“Coronavirus, Explained” (2020, TV-PG), narrated by J.K. Simmons, explores the origins and history of the pandemic. New episodes will arrive this summer.

A young man (Ashton Sanders) trapped in the violence of Oakland lands in prison with his estranged father (Jeffrey Wright) in “All Day and a Night” (2020, R), a Netflix original drama from “Black Panther” cowriter Joe Robert Cole.

International cinema: a rich young man pretends to be poor to impress the girl he loves in the romantic comedy “Rich in Love” (Brazil, 2020, not rated, with subtitles). Also new:

True stories: “A Secret Love” (2020, not rated) tells the story of Terry Donahue, who played in the women’s professional baseball league, and Pat Henschel, who kept their love affair secret for decades.

Streaming TV: the Australian thriller “Reckoning” (not rated) follows two fathers devoted to protecting their families, but one of them is a serial killer. Also new:

International TV: in “Into the Night: Season 1” (Belgium, not rated, with subtitles), passengers on an airplane do what they can to survive when the sun starts killing everybody. Also new:

Kid stuff: “Song of the Sea” (2014, PG) is an animated Irish fairy tale told in a stylized manner with appeal to young kids and adults alike. Also newly arrived are the musical fantasy “Willy Wonka & the Chocolate Factory” (1971, G) with Gene Wilder and Tim Burton’s remake “Charlie and the Chocolate Factory” (2005, PG) with Johnny Depp.

“Happiness Continues: A Jonas Brothers Concert Film” (2020, not rated) takes audiences behind the scenes of the band’s reunion tour.

The complete run of “Cougar Town” (2010-2015), the sitcom starring Courteney Cox, Christa Miller, and Busy Philipps, is now streaming. Forget the title; the series left it long behind as it shifted gears to focus on the eccentric neighbors in a suburban Florida cul-de-sac.

The second season of the Australian science fiction thriller “Bloom” (2020, not rated) is now available.

The final season “Lovejoy” (1994) with Ian McShane as a rakish antiques and art dealer is now on Acorn TV, making the entire series available to stream.

“Blood Quantum” (2019, not rated), a zombie thriller set on a First Nations reservation in Canada, and supernatural thriller “0.0 Mhz” (South Korea, not rated, with subtitles) make their respective U.S. debuts on Shudder.

Criterion Channel presents “Wadjda” (Saudi Arabia, 2012, PG, with subtitles), the story of a young girl who defies tradition to learn to ride a bicycle. It’s the first feature directed by a female Saudi director. Also new: