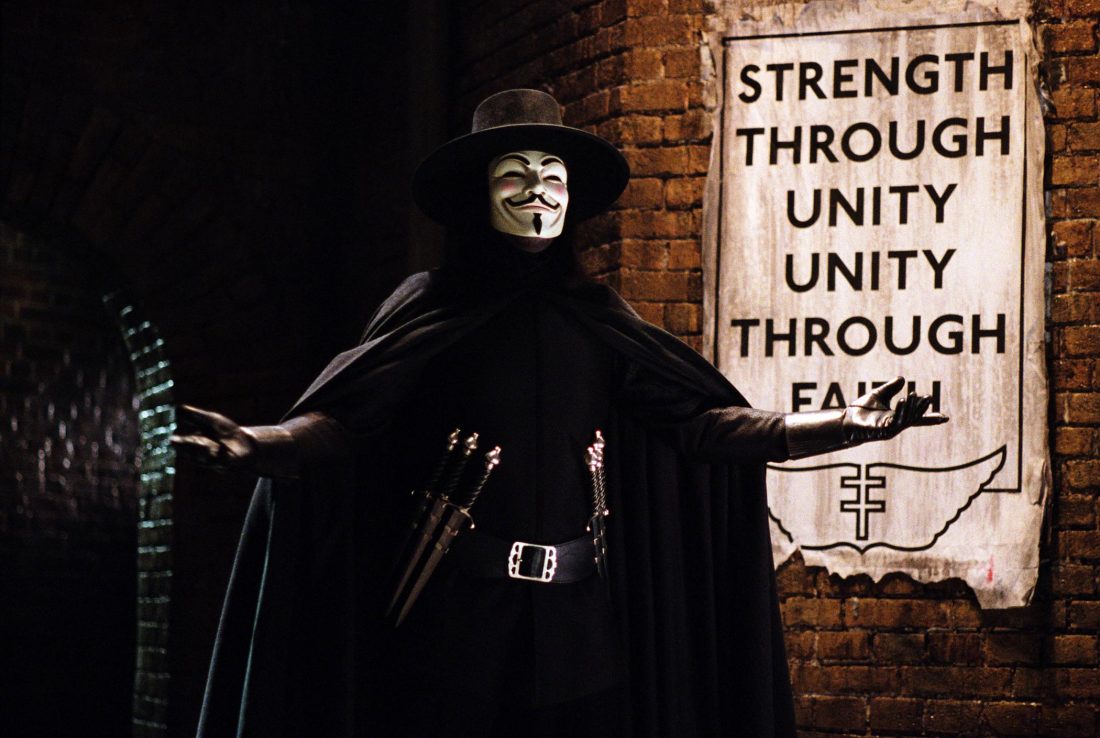 His name is nowhere to be seen in the credits but this futuristic thriller about an authoritarian government out of 1984 and a lone revolutionary who takes them on comes from Alan Moore’s acclaimed graphic novel. Moore distanced himself from the film (as he has with every film based on his work), but it’s actually quite faithful, right down to the ambiguity of its swashbuckling terrorist hero V (Hugo Weaving behind the Guy Fawkes mask).

Natalie Portman is Evey, the working-class girl saved from the secret police by V and becomes, over time, his accomplice. Stephen Rea is the relentless detective whose loyalty to the cruel government and its corrupt rulers is weakened with every step of the investigation and John Hurt is the dictator who rules through propaganda, control of the media, and a population who never questions his authority… until V comes along.

It’s not subtle and that’s to its credit. It makes an impact with a blunt force attack on the way freedoms are taken and how people allow it to happen. It makes intellectual connections between actions and ideas and then it illustrates it through the personal drama. And it reminds us that for all the fears of terrorism there are ideas behind every action and consequence to the choices made to fight it. Flesh dies but ideas live on.

Moore wrote the graphic novel as a commentary on Thatcher’s England and the film retains the London setting, but it only takes a few key phrases to echo the post-9/11 era and the rhetoric of the contemporary American administrations. The issues are all the more relevant… and even more ambiguous. Stephen Fry, Tim Pigott-Smith, and Sinéad Cusack co-star. The Wachowski Siblings script and produce and James McTeigue directs.

and other services. Availability may vary by service.
V for Vendetta [Blu-ray]

The Blu-ray and two-disc DVD special editions include the featurettes “Freedom! Forever!: Making V for Vendetta,” “Designing the Near Future,” “England Prevails: V for Vendetta and the New Wave in Comics,” and “Remember, Remember: Guy Fawkes and the Gunpowder Plot,” a montage set to the end credits song by Cat Powers, and the Saturday Night Live digital short parody of the film with Natalie Portman.