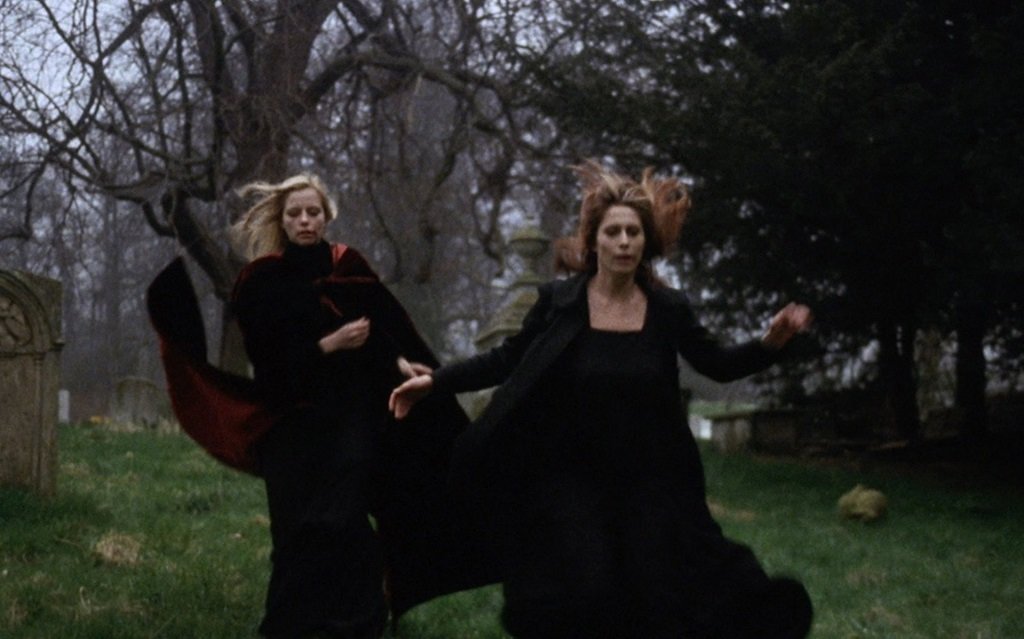 In Vampyres (1974, NC-17), one of the more interesting slices of seventies vampire Eurotica, Spanish filmmaker Joseph Larraz (aka José Ramón Larraz) reworks “Carmilla” and rewrites the vampire myth to make his bloodsucking lovelies the restless ghosts of lesbian lovers murdered while making love in their shadowy castle.

Reappearing nightly in the twilight forest, they lure men to their castle for blood feasts until the brunette vampire Fran (Marianne Morris) falls for her latest victim (Murray Brown) and decides to keep him alive, a sex slave she slowly drains dry. “You’re playing a dangerous game,” warns blonde Miriam (Anulka), perhaps just a tad jealous. As the local cops watch a veritable wrecking yard of car crashes, all with naked dead men behind the wheels, fill up the sleepy back roads, you have to wonder if anyone finds this a bit suspicious.

To quote Larraz himself: “Naked girls and lots of blood, that’s what Vampyres is about. So yes, it’s a slim story filled with misty forests, candlelit castle interiors, and the above mentioned blood and naked flesh. Larraz adds a few poetic flourishes—blood dripping down pale faces, clouds crawling past a castle—but more importantly gives the living dead girls a genuinely passionate relationship and a zest for nightlife even while piling on the exploitative nude scenes. It’s a minor classic with a dreamy sense of horror and a delicious conclusion.

Amazon Prime has the restored European cut, which was re-rated NC-17.

, iTunes, GooglePlay and/or other services. Availability may vary by service.
Vampyres [Blu-ray]

On Blu-ray and DVD from Blue Underground with commentary by director Joseph Larraz and producer Brian Smedley and interviews with stars Marianne Morris and Anulka.