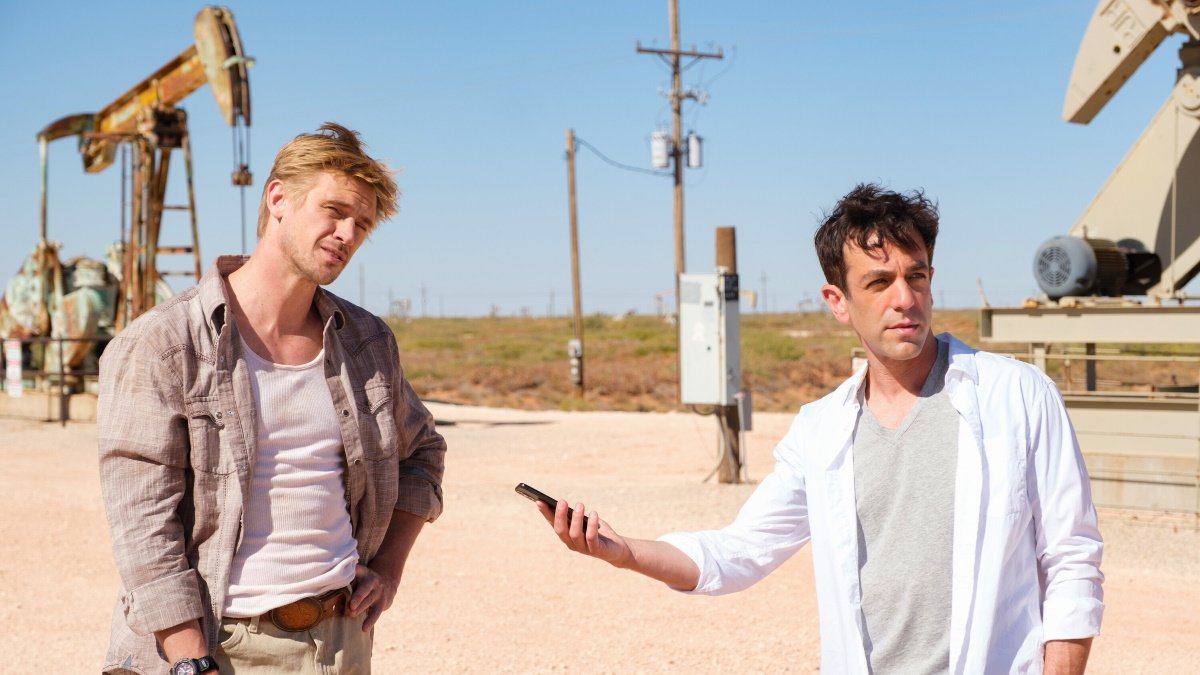 B.J. Novak writes, directs, and stars in “Vengeance” (2022, R), a dark comedy about an aspiring New York podcaster who finds a story in a remote, impoverished Texas town filled with eccentric characters. Beneath the murder mystery and the fish-out-of-water story of an arrogant urban guy in rural community is a sharp, smart satire of the cultural divide, economic desperation, family, lies we tell ourselves, and lies we tell others. Ashton Kutcher stands out in a supporting cast that includes Boyd Holbrook, J. Smith-Cameron, and Issa Rae. (Peacock)

Matt Damon, Adam Driver, and Jodie Comer star in “The Last Duel” (2021, R), a medieval drama based on the true story of the last royally-sanctioned duel to the death in France, told from the different perspectives of the three protagonists. It’s been compared to Kurosawa’s “Rashomon” but this perceptive screenplay by Nicole Holofcener, Damon, and costar Ben Affleck (superb as a libertine aristocrat) uses point of view not to show how everybody lies but rather explore how their truths reflect power, status, ego, and pride of those telling and the assumptions of the culture around them. Ridley Scott directs, and it’s the best he’s made in years. New to Hulu and still streaming on HBO Max.

“The Outfit” (2022, R) stars Mark Rylance as a British tailor (or rather, a cutter, as he insists) in 1950s Chicago who has to outwit violent gangsters when they take refuge in his shop during a mob war. Clever and suspenseful, this is a marvelously entertaining mix of American gangster thriller and British drawing room psychodrama that keeps reframing the story with each fresh revelation. Dylan O’Brien, Zoey Deutch, and Johnny Flynn costar. (Prime Video).

Channing Tatum co-directs and stars in the heartwarming road movie “Dog” (2022, PG-13) as an Army Ranger assigned to take a traumatized service dog from Washington State to the funeral of a fellow soldier in Arizona. They are two wounded combat veterans who evolve from wary traveling companions to road buddies who heal one another along the journey. (Prime Video)

Twin brothers suspect that their mother (Naomi Watts), who arrives home from the hospital with her face wrapped in surgical bandages, is actually an imposter in “Goodnight Mommy“ (2022, R). Cameron and Nicholas Crovetti costar as the young twins in the remake of the Austrian psychological horror film by American filmmaker Matt Sobel. (Prime Video)

“Where the Crawdads Sing” (2022, PG-13), based on the novel by Delia Owens, is a mystery involving a young woman (Daisy Edgar-Jones) raised in the marshes of the deep South suspected of murder. Also on DVD and at Redbox.

Camila Mendes and Maya Hawke star as high school rivals who secretly become friends and take on each other’s tormentors in the dark comedy “Do Revenge” (2022, TV-MA). It’s directed by Jennifer Kaytin Robinson (cowriter of “Thor: Love and Thunder”) and costars Sophie Turner.

A group of schoolkids sneak into an abandoned apartment complex and find themselves transported into the middle of ocean in the animated fantasy “Drifting Home” (Japan, 2022, PG, with subtitles) from director Hiroyasu Ishida (“Penguin Highway”).

A former boy band star (Ed Skrein) teams up with an autistic young drummer (Leo Long) in the comic drama “I Used to Be Famous“ (2022, TV-MA).

“Morbius“ (2022, PG-13), based on a character from the “Spider-Man” comic books, stars Jared Leto as a doctor who turned himself into a living vampire after an experiment treatment.

Keira Knightley is “Colette“ (2018, R) in the biographical drama about the early years of the great French author from award-winning director Wash Westmoreland.

True crime: the docuseries “Sins of Our Mother“ (TV-14) revisits the case Lori Vallow, a wife and mother on trial for murdering four people, including her two youngest children.

Streaming TV: “Heartbreak High: Season 1“ (TV-MA) is a teen drama from Australia about the fallout from a mural that exposes the secrets of high school students. Also new are the young adult supernatural series “Fate: The Winx Saga: Season 2“ (TV-MA) plus the TBS mystery “In the Dark: Season 4“ (TV-14) and CW young adult drama “Roswell, New Mexico: Season 4“ (TV-14).

International passport: based on a true story, “The Catholic School“ (Italy, 2022, TV-MA, with subtitles) dramatizes a brutal murder at a prestigious all-male Catholic high school in Rome in 1975.

International TV: the limited series thriller “The Lørenskog Disappearance“ (Norway, TV-MA, with subtitles), based on a true story, follows the search for a billionaire’s missing wife. Also new is “Santo: Season 1“ (Spain, TV-MA, with subtitles), a crime thriller about two maverick cops (Bruno Gagliasso and Raúl Arévalo) forced to work together to track down an enigmatic drug lord.

The Fox music drama “Monarch: Season 1“ (TV-14) stars Oscar-winner Susan Sarandon and country music star Trace Adkins as the heads of a country music dynasty in Texas and Anna Friel as the heir apparent fighting to maintain the legacy. New episodes on Mondays.

Also new are “The Handmaid’s Tale: Season 5“ (TV-MA) with Elisabeth Moss and the fourth and final season of “Atlanta“ (TV-MA) with Donald Glover and Zazie Beetz.

“The Brave One“ (1956), a family drama about a Mexican boy who tries to save a bull from the bullfighting ring, won an Oscar for it screenplay, which was written by blacklisted screenwriter Dalton Trumbo under a front.

The family drama “The Art of Racing in the Rain“ (2019, PG) stars Milo Ventimiglia as a race car driver and the voice of Kevin Costner as his loyal dog.

The British-Estonian coproduction “Firebird“ (2022, R) is a drama about two men in the Soviet Air Force during the Cold War who fall in love.

“Thursday Night Football“ (2022) finds its new home on Prime Video, with 15 regular-season games and one preseason game this year.

True stories: “Hell of a Cruise“ (2022, not rated) looks at the luxury Diamond Princess cruise ship that was quarantined by an outbreak of the deadly novel coronavirus in early 2020.

“Official Competition“ (2022, Spain, with subtitles), a comedy set in the world of filmmaking, stars Penélope Cruz as a director who has to manage to dueling egos of her stars (Antonio Banderas and Oscar Martínez) during rehearsals.

Samantha Morton is Catherine de Medici in “The Serpent Queen: Season 1“ (TV-MA), the historical drama about the rise of one of the most powerful and longest-serving rulers in French history. Charles Dance and Ludivine Sagnier costar. New episodes on Sundays.

An advice columnist (Maria Doyle Kennedy) turns detective when one of her correspondents is found dead in “Recipes for Love and Murder: Season 1“ (not rated). Based on the novels by Sally Andrew. New episodes on Mondays.

A Danish undercover expert and a German homicide detective poset as a married couple in “White Sands: Season 1“ (Denmark, with subtitles), a murder mystery set in a Danish seaside town.

The Afrofuturist sci-fi punk musical “Neptune Frost“ (2021, not rated), from musician and multidisciplinary artist Saul Williams and Rwandan-born artist and cinematographer Anisia Uzeyman, follows an anticolonialist hacker collective in the hills of Burundi.

“The Cinema 5 Story” presents 20 essential films brought to American audiences by the groundbreaking movie-theater chain and distribution company Cinema 5, from imported romantic hit “Elvira Madigan“ (Sweden, 1967, with subtitles) and Miloš Forman’s landmark satire “The Firemen’s Ball“ (Czechoslovakia, 1967, with subtitles) to the trippy “The Man Who Fell to Earth“ (1976) with David Bowie and the documentary “Pumping Iron“ (1977) that made a star of Arnold Schwarzenegger. The program includes Oscar-winners “Z“ (Algeria, 1969, with subtitles) and documentary “Harlan County USA“ (1976) and features the streaming debut of “Searching for Mr. Rugoff“ (2019, not rated), a documentary on the founder of Cinema 5.

The documentary “Monkey Business: The Adventures of Curious George’s Creators“ (2017, not rated) tells the unexpected story of the authors of the beloved children’s books.

The documentary “Becoming Iconic: Jonathan Baker“ (2022, not rated) follows a first-time filmmaker navigating the industry with the help of some legendary directors.