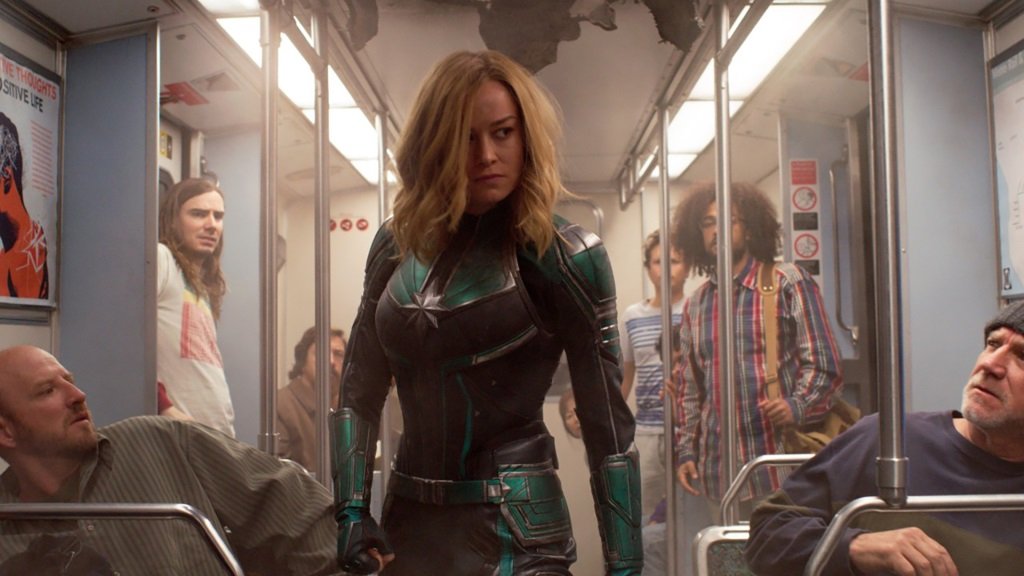 Brie Larson plays the first female superhero to headline a Marvel movie in Captain Marvel (2019, PG-13), which begins across the galaxy and lands in 1990s America. Larson’s chemistry with Samuel Jackson (as a pre-Avengers Nick Fury) and a cat named Goose carries the film between splashy action scenes. Directed by Anna Boden and Ryan Fleck (making it the first Marvel superhero film from a woman filmmaker). On Cable On Demand, VOD, DVD, and at Redbox.

Christian Bale in Dick Cheney in Vice (2018, R), the satirical political biopic from “The Big Short” director Adam McKay that explores the transformation of executive power that Cheney oversaw as Vice-President. Costarring Amy Adams as Lynne Cheney, Steve Carell as Donald Rumsfeld, and Sam Rockwell and George W. Bush, it was nominated for eight Academy Awards and won the Oscar for makeup. Streaming on Hulu.

The Oscar-nominated animated adventure Ralph Breaks the Internet (2018, PG) sends the misfit heroes of Wreck-It Ralph (voiced by John C. Reilly and Sarah Silverman) into the worldwide web, where even more chaos awaits them. Gal Gadot and Taraji P. Henson join the voice cast on this visually dense journey. Streaming on Netflix.

The sprawling documentary Rolling Thunder Revue: A Bob Dylan Story by Martin Scorsese looks back at Dylan’s legendary, improvised 1975 tour, which he embarked upon with Joan Baez, Roger McGuinn, T-Bone Burnett, Ramblin’ Jack Elliott, and many others, with a mix of archival performance footage (much of it previously unseen) and recent interviews. On Netflix the same day as select theaters.

The third and final season of Jessica Jones pits the reluctant urban hero (played by Krysten Ritter) against a brilliant psychopath and brings the Marvel superhero universe to a close on Netflix. 13 episodes on Netflix.

Classic pick: Robert Redford is a brash, fiercely competitive skier in Downhill Racer (1969, PG), a drama about the business of sports and the psychology of competition and fame. It was the first film that Redford developed for himself and the accomplished feature debut of director Michael Ritchie. Streaming on Amazon Prime Video.

Matthias Schoenaerts is a violent convict whose life is turned around when he trains a wild horse in an experimental rehabilitation program in The Mustang (2019, R), a drama inspired by a true story. Also on DVD and at Redbox. Also new:

Available same day as select theaters nationwide is Hampstead (2017, PG-13), a comic drama starring Diane Keaton as an American in England and Brendan Gleeson as an Irish squatter she befriends. It’s inspired by a true story. Also new:

Adam Sandler and Jennifer Aniston are an American couple in Europe caught up in a Murder Mystery (2019, PG-13) in the latest Netflix Original comedy from Sandler.

True stories: the short documentary Life Overtakes Me (2019, not rated) looks at traumatized refugee children in Sweden suffering from a coma-like illness. Also new is the nonfiction series The Alcàsser Murders (Spain, with subtitles) about the 1992 murders of three teens from that rocked the nation.

Foreign affairs: DJ Cinderella (Brazil, 2019, not rated, with subtitles) reworks the classic fairy tale as a modern romantic comedy about a teen DJ and a pop superstar. Originally released to theaters in Brazil as Cinderella Pop. Also new:

Silent Witness: Seasons 1-21 (1996-2018) offers all but the most recent episodes of the long-running British forensic crime drama starring Amanda Burton in the first few seasons and Emilia Fox from season eight to the present.

Stana Katic returns in Absentia: Season 2 as a traumatized FBI agent trying to fill in the missing gaps of her brutal abduction.

Foreign affairs: an overworked son strikes a deal for home care for his ailing mother in Devil (India, 2018, not rated, with subtitles), an award-winning adaptation of Guy de Maupassant’s “Le Diable.”

Natalie Portman and Ashton Kutcher are friends with benefits in the romantic comedy No Strings Attached (2011, R) (Prime Video and Hulu).

Bradley Cooper’s A Star is Born (2018, R), the latest remake of the Hollywood classic with Lady Gaga in the starring role, earned eight Academy Award nominations and a win for Lady Gaga’s original song.

Available Saturday night is the indie drama The Hate U Give (2018, PG-13) starring Amandla Stenberg as black teenager who witnesses the shooting death of a childhood friend by a nervous young patrolman. Regina Hall, Russell Hornsby, and Anthony Mackie costar.

And on Sunday night the HBO original series Euphoria, starring Zendaya as a high school kid navigating the world of anxiety, sexuality, identity, and social pressure with her peers, debuts.

The Acorn TV original crime drama Straight Forward sends a Danish con-woman (Cecilie Stenspil) to New Zealand when the mob puts out a hit on her. Eight episodes now streaming.

The Criterion Channel spotlights the films of acting great Alec Guinness (from Kind Hearts and Coronets, 1949, to Our Man in Havana, 1959) and Mexican filmmaker Carlos Reygadas (Battle in Heaven, 2005, Silent Light, 2007, both not rated, with subtitles).

The global service that streams one film a week relaunches with a new slate of new and archival films beginning with Claire Denis’ long unavailable Keep It For Yourself (1991), a short film made in New York City featuring Vincent Gallo. It streams through June 20.