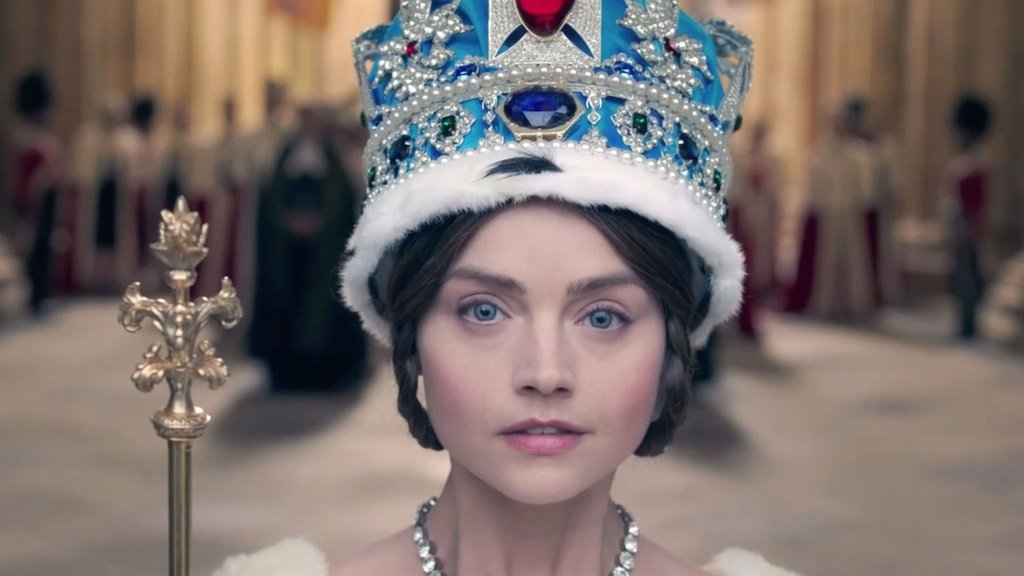 One-time Doctor Who companion Jenna Coleman ascends the throne in Victoria: Season 1, the British TV drama that chronicles the life and reign of young Victoria as she crowned Queen of England in 1837 at the age of 18.

Created by veteran BBC producer and novelist Daisy Goodwin, the first season covers the first few years of her reign as she learns the ways of power and politics and fights to maintain her independence from Sir John Conroy (Paul Rhys), her mother’s private secretary and would-be royal advisor, and from the Duke of Cumberland (Peter Firth), her uncle and a powerful royal who plots to set up a regency that will rule in her name. She chooses Lord Melbourne (Rufus Sewell), the Whig Prime Minister, as her advisor, weathers scandal and shifts in the political winds, and marries Prince Albert (Tom Hughes) after a turbulent introduction, and the season ends with the birth of their first child. Between the historical beats, the series explores the politics around Victoria (as titled old men attempt to take power from the young woman as their due), her tense relationship with her mother (who still holds on to German tradition), and the struggle of Albert to find a purpose within the kingdom and Victoria to share her responsibility with her new husband.

The series is handsomely mounted and slips in upstairs/downstairs melodrama with stories of the staff members, but it is built on Coleman’s bright, energetic portrayal of Victoria and the real-life history of her early years, including a scandal that turned the public against her and the anti-German sentiment that led to an assassination attempt.

The show debuted on British TV in the summer of 2016, a few months before Netflix released the thematically similar and more expensive The Crown (about Queen Elizabeth II), and on the PBS showcase Masterpiece in the U.S. in early 2017. It’s now streaming on Amazon Prime.

, iTunes, GooglePlay and/or other services. Availability may vary by service.
Masterpiece: Victoria [Blu-ray]

On DVD and Blu-ray from PBS Home Video with brief featurettes and short cast interviews.