Wild Tales delivers on the promise of its title. An anthology of six original short stories from writer / director Damián Szifrón, it is a blackly comic film of modern life churning with frustration, rage, vengeance, and other decidedly civilized impulses. It opens on pure perfection, a darkly hilarious pre-credits revenge vignette that turns on a single joke that is flawlessly teased out, revealed, and executed, right down to the final freeze frame. If the subsequent pieces aren’t as wickedly satisfying, it’s because they are more ambitious and involved: a demolition engineer in a losing battle with bureaucracy (and his own obsessiveness), a savage road rage war that turns poisonously vicious, a disturbing drama of rich privilege that becomes even more disturbing as the price for corruption gets continually renegotiated. It’s all about pushing past the borders of civilized behavior to unleash the primal instincts of the human beast’s worst impulses. Give Szifrón credit for coming out of it with a happy ending—or at least the closest one can come from the wreckage left in the wake of a bride scorned on her wedding day.

It’s easy to see why Pedro and Agustín Almodóvar signed on as producers. Szifrón’s style is more stripped away and his satire more cutting and vicious than the compassion of Almodóvar’s sexy melodramas and colorful personalities, and his direction homes in on dramatic collisions between his characters, bringing out the tensions and the escalation of conflict to reveal the petty cruelties and greed and suppressed anger of the modern world. But the sensibility is similar, as is the satirical perspective. Like Almodóvar, Szifrón is all about emotion over reason. He just doesn’t find much to celebrate about passions unleashed. He does, however, find a mordant humor in it all, and he has the wit to pull it off. It earned the film an Oscar nomination for Best Foreign Language Feature and an armful of awards in Argentina.

Also on Blu-ray and DVD. 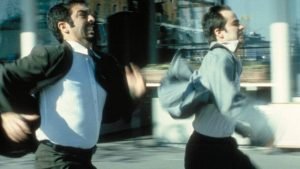