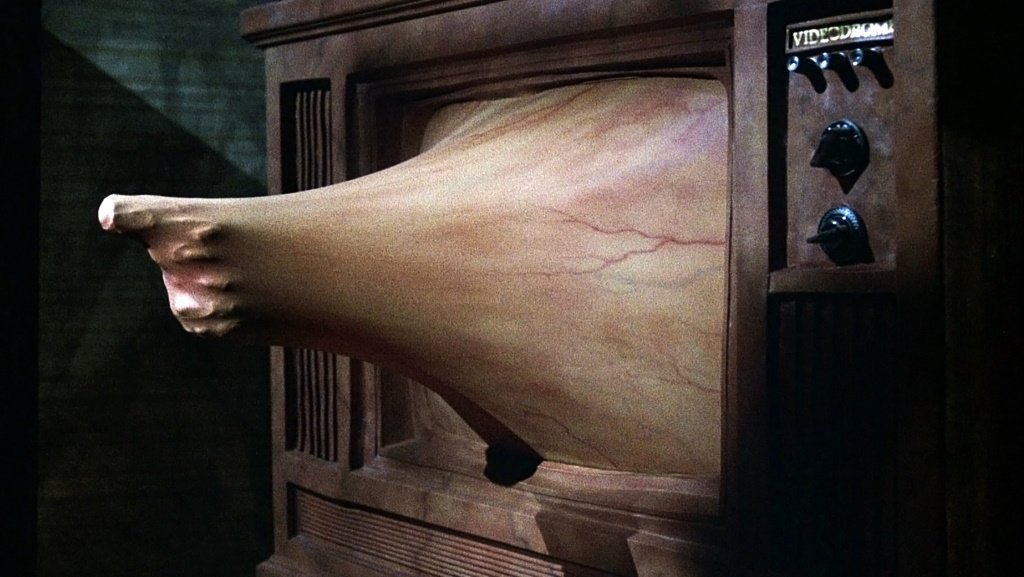 It’s been almost 40 years since David Cronenberg’s first masterpiece drilled its mutant images into the minds of unsuspecting audiences. Today, the visionary Videodrome (1983) is as contemporary and relevant as ever.

James Woods stars as Max Renn, a hustling cable TV entrepreneur in the pioneering days of cable TV who becomes fascinated by a pirate TV signal with brutal yet hypnotic S&M broadcasts. He’s just looking for transgressive thrills to jolt his jaded sensibilities. What he gets is the Hallucination Channel, a subsonic virtual drug transmitted by TV signals. It burrows into the mind and then starts creating its own violent and disturbing images in Renn’s head and designer mutations in his flesh.

His investigations take him to the Cathode Ray Mission of “media prophet” Brian O’Blivion (Jack Creley), a kind of reclusive, wacko version of Marshall MacLuhan who speaks only through TV monitors and takes the “guru” part of media guru seriously, and corrective lens entrepreneur Barry Convex (Cronenberg isn’t shy about front-loading character names), a blankly creepy player in a bizarre conspiracy played with a skin-deep, unctuous conviviality by Les Carlson.

On its surface you can read it as a media screed with a drug addiction subtext. The alienating effects of TV and the skewed sense of reality caused by viewing the world through the cathode ray window are central elements of his mind-bending conspiracy thriller, but ultimately it’s a reductive interpretation. Cronenberg uses the fears of television to manipulate an audience as a starting off point for a conspiracy thriller curled around his favorite topics: the response of the body human to technology, and disease and mutation as evolution. In the words of his own character, Cronenberg makes his visions become flesh.

With Videodrome, however, Cronenberg takes his themes a step further than in his previous films. Renn’s ordeal is as much about perception as mutation and Cronenberg never leaves Renn’s perspective. But while we can never know whether Renn is experiencing a mutant leap into the future or a hallucinatory waking nightmare, there’s no doubt that he’s a slave to the signal.

Rick Baker’s latex and mechanical make-up effects, state of the art at the time, look as dated as the blurry, lo-fi video imagery of the pirate broadcasts. It’s the creative madness of the ideas and the resonance of the visceral images make them nightmarish. Woods is at once charming and sleazy and the jittery intensity and streetwise smarts behind his cable-TV carny attitude makes Max more vivid and passionate than any of Cronenberg’s previous protagonists. Woods makes Renn an innocent at heart, a man fascinated by imagery but unnerved when the fantasies are made real, either in the consensual sex games of Deborah Harry’s seductive radio psychologist or the battering blasts of brutal hallucinations. He makes Renn’s journey as emotionally compelling as it is harrowing and alien. “Death to Videodrome! Long live the new flesh!”

, iTunes, GooglePlay, Vudu, and/or other services. Availability may vary by service.
Videodrome (The Criterion Collection) [Blu-ray]

The 2-disc unrated Criterion edition features the complete, unrated directors cut, with restored footage cut from its original theatrical showings. David Cronenberg is at his usual articulate and observant best on one of the 2 newly recorded commentary tracks on the disc (his comments are edited together with cinematographer Mark Irwin, but they were recorded separately and another track features actors James Woods and Deborah Harry). Other highlights include his lovely short film “Camera,” a meditation on aging, imagery, and filmmaking made for the Toronto Film Festival in 2000, the original 30 minute documentary “Forging the New Flesh,” a detailed look into the making of the video and make-up effects directed and narrated by the film’s video effects supervisor Michael Lennick, and the 1983 “Fear on Film” round-table discussion with Cronenberg, John Carpenter, and John Landis. Conducted by future filmmaker Mick Garris, it’s a veritable time-capsule of the ambitious young directors, in a forum that allows them to discuss horror cinema, special effects makeup, and censorship with intelligence and passion.