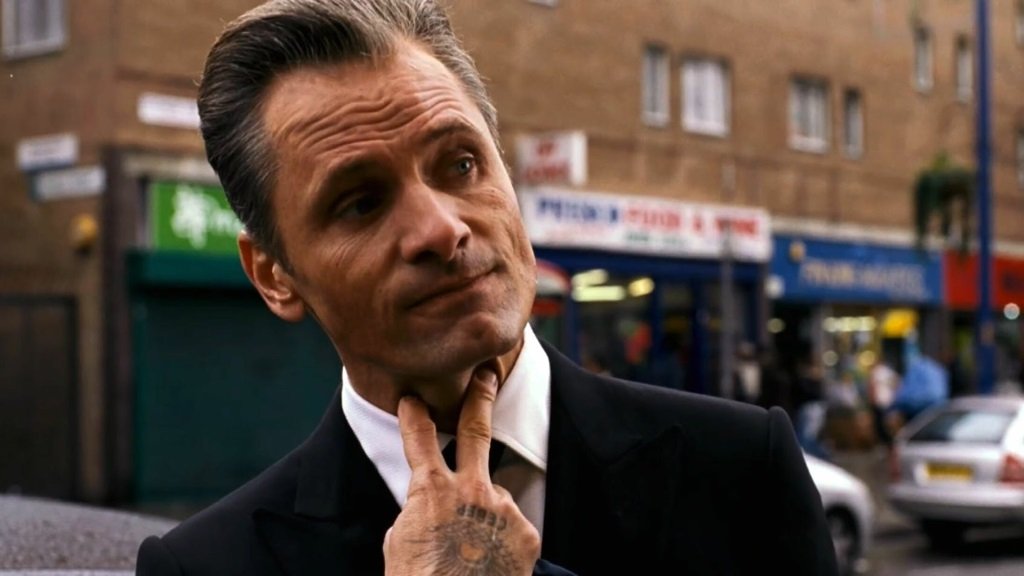 Eastern Promises (2007) reunites A History of Violence director David Cronenberg and star Viggo Mortensen for another dive into the shadowy, dangerous world of organized crime and hidden identities.

As Nikolai, a chauffeur and foot soldier in a Russian crime family in London, Mortensen wears his shadow of a smile like an impenetrable mask. One minute he’s indifferently hacking up and disposing of the murdered corpse of a rival gangster, the next he’s watching out for (Naomi Watts), an innocent hospital midwife who has landed in the sites of his family boss, Semyon (Armin Mueller-Stahl), when she inherits the incriminating diary of a runaway prostitute. His smile remains the same throughout: noncommittal, detached, blank.

Mortensen is compelling in a role that is as emotionally guarded as it is shaded. We want to believe that Nikolai is really a soulful gangster with a criminal code behind his ambiguous grin and dark glasses because he may be Anna’s only protection from Semyon and his careless, rash son, Kirill (Vincent Cassel). Nikolai’s ambiguous motivations create as much tension as her predicament and Mortensen and Cronenberg refuse to tip their hand until we’re deep into the complications.

The script by Steven Knight (Dirty Pretty Things, Peaky Blinders) offers a brutally unglamorous underworld where brothels are filled with teenage girls who followed the Eastern promises of western plenty into the misery and degradation. There’s no code of honor among these criminals, no matter what their identifying tattoos say, and the violence is swift and brutal, as Nikolai proves when he’s attacked in a bathhouse, defending himself against cold steel with reflex efficiency. Rarely has anyone looked so vulnerable and ferocious in (literally) naked combat.

Nikolai is impenetrable to the end, thanks to Mortensen’s restraint and Cronenberg’s ambiguity, which makes the steely gangster drama reverberate with ambiguity long after it ends. That kind of mystery is rare in a film culture that demands answers before the credits roll.

The Blu-ray and DVD releases include two bonus featurettes.