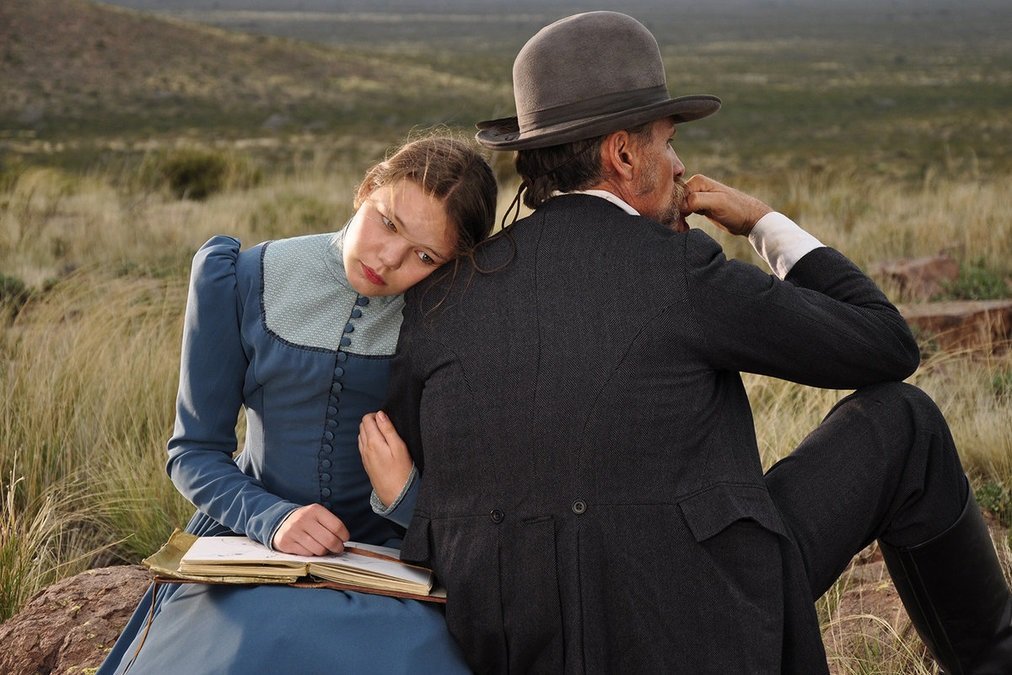 You could collect the films of Argentine filmmaker Lisandro Alonso under the title “Into the Wild.” His characters go out of the cities and into the wilderness or the isolated backcountry, and characters who leaves the constraints of society for the primal or the internal. Jauja (2014), pronounced “How-ha,” is both: an odyssey into the badlands of Argentina where a bandit leader rules (by myth as much as by violence) and into a dream.

Viggo Mortensen stars as Captain Gunnar Dinesen, a Danish engineer working with the Argentine army in the late 19th century. It’s a period piece that ostensibly takes on the genocide of Argentina’s colonial past—the army is sent to exterminate the primitive “coconut heads,” as they call the natives—but this is as much about men moving through the landscape, leaving behind the rules of civilization as they retreat farther into the wilderness, as anything they may be seeking.

“We don’t belong here,” Dinesen ruefully admits to his 15-year-old daughter Ingeborg (Viilbjørk Malling Agger). He’s not just talking about wilds of Patagonia. Officer’s title aside, Dinesen is more civilian than soldier. He speaks Danish in a Spanish-language company and realizes his teenage daughter—the only woman in this company of men—is the object of unwanted attention from an insistent lieutenant. When she runs off into “enemy territory,” the vast, barren inland country where a rebel guerilla leader has become as much myth as adversary, Dinesen follows without waiting for military escort. He’s awkward and out of place in the landscape and in the company of crude soldiers and he shows the weariness of age in his graying beard and his unhurried pace. It’s a physical vulnerability we don’t often see in Mortensen’s performances and it is powerful.

Alonso isn’t one for exposition. The film leaves the coast for a grassy pampas with rocky nubs and spiky mountains punching up through the earth like the skeleton of ages past. The spare dialogue gives way to a symphony of crickets and insects and lonely winds. His long, lingering shots remain even after the characters have left the frame, as if contemplating the transience of life. That may sound pretentious; I find it beautiful and haunting. Alonso grounds it in the physical experience of the characters and the texture of the moment before slipping into the metaphysical. It’s more poem than story and it lingers after the credits end.

Not rated, it’s spoken in Danish, Spanish, and French, with English subtitles, but for the most part there’s no dialogue at all.

Watch it on Kanopy

Also on Blu-ray and DVD and on SVOD through Amazon Video, iTunes, GooglePlay, Fandango, Vudu and/or other services. Availability may vary by service.
Jauja [Blu-ray]