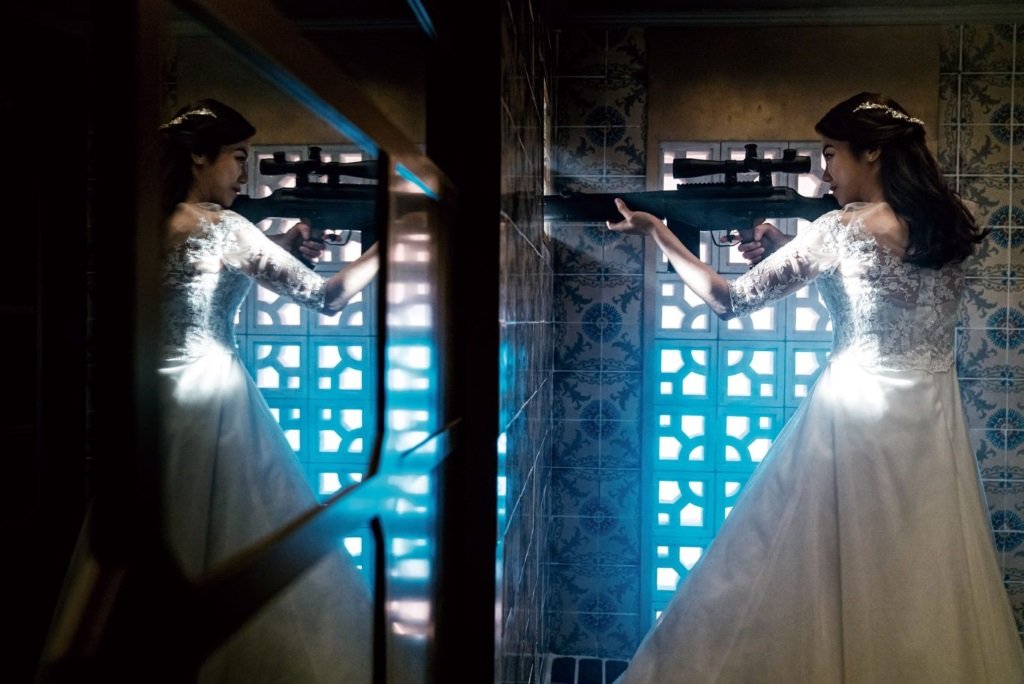 The Villainess (South Korea, 2017) is not a remake of La Femme Nikita but it is surely built from the DNA of that defining action classic.

It opens on an amazing action sequence, a seemingly unbroken take from the jittery POV of some ferocious but still-unseen fighter wiping out armies of thugs with bullets, knives, and bare hands. It’s not a new gimmick but director Byung-gil Jung and his action choreographers keep it building as this remarkably resourceful force of fury ascends the flights of a drug house, sweeping out a small army of thugs, and then lands in the top story dojo where a glance at the full-length mirror reveals a fierce young woman half the size of most of her opponents. The camera leaps from her POV and takes on its own acrobatic life as it whirls around the final showdowns between this wiry little dynamo and the hulking bruisers at the end of her fury road. That’s how to kick off an action spectacle.

Pull back to see a bunch of suits replaying her arrest on a video monitor and we hear “She could be an asset.” Which is where Nikita takes over. She’s taken by a covert organization to a black ops training facility and trained to become covert assassin with the promise of freedom at the end of ten years of service… providing she survives. It doesn’t take long for us to learn that this is a ruthless organization and the agents are disposable.

South Korean star Kim Ok-bin plays the ferocious Sook-hee, whose life story unfolds in flashbacks (not always in chronological order) that reveal a tragic past, a previous life as a criminal assassin, and a dead husband who turns out to be alive and out for blood. She’s kind of a blank slate for all that, at least through the wild melodrama of her emotional journey. Once in action, though, she is focused and unstoppable. Director Byung-gil Jung offers some thrilling, elaborately-choreographed action scenes. His camera is often free-flying through scenes and he uses whiplash movement the way American action cinema uses editing: to intensify the action. It’s like’s he’s trying to outdo John Wick with those sustained takes. The Korean melodrama feels shoehorned into the action but there’s no denying that this is film delivers when it comes to sheer visceral action.

Not rated, in Korean with English subtitles

, iTunes, GooglePlay and/or other services. Availability may vary by service.
The Villainess [Blu-ray + DVD Combo]