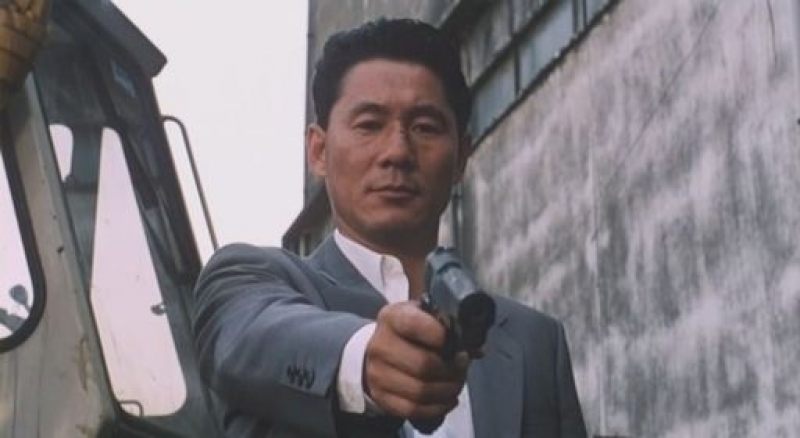 In Violent Cop (1989) and Boiling Point (1990), actor-turned-filmmaker Takeshi Kitano has a way of transforming stillness into tension in his crime films.

In the opening shot of Violent Cop, Kitano’s 1990 directorial debut, the camera holds on the smiling face of a toothless derelict. Like a pebble dropping into a pond the calm is shattered when a soccer ball knocks his dinner from his hand and a swarm of teens rushes him. The violence erupts out of nowhere as they relentlessly beat and kick him, and as the homeless man lies dead on the ground the feckless kids hop on their bikes and nonchalantly peddle away as if leaving the playground.

Into this cruel, uncaring world strolls Azuma (Takeshi), the police detective who earns the film its title many times over. In his first scene he beats a suspect, one of the teenage boys, in the kid’s own room. Azuma has a reputation for making up his own rules and he maintains a precarious position in the department that looks away as the lone wolf gets results at the price of unbridled police brutality. “Behave yourself for a year while I’m chief,” demands his new superior. He looks on like he hasn’t heard a thing, and before long he’s back to his usual tricks, running down suspects, beating drug dealers, planting evidence, even slugging a pimp standing in the stationhouse hall. Once in a while he cracks a smile, but mostly he wears a deadpan mask. Kitano has an amazing face, calm and bemused, at times almost blank, with big teddy bear eyes and soft features that suggest a gentle nature denied in his every action. Even when the battle becomes personal and the hair-trigger cop goes on his rogue rampage, he maintains that serenity, hardening just a bit, his crook of smile straightening out to a taut determination, perhaps suggesting a touch of bitterness and sadness.

Takeshi Kitano, better known by his nickname “Beat” Takeshi in Japan, rose to fame as a stand-up comic and remains one of Japan’s most popular TV personalities (he’s been known to host or star in as many as four TV shows simultaneously). His background helps explain how he can transform bullying bastards into such likable characters, but it doesn’t account for the fully realized style. Kitano stepped in as director of Violent Cop at the last minute and leapt out of the gate with a powerful, fully developed style. He boldly sketches shots with a seemingly simple directness and stages visceral action scenes with a mesmerizing impassivity: the camera locks down and watches the war zone erupt. And for a director of so-called action films, Takeshi’s cinema is full of static images and long digressions, intermissions from the blood sport. When the inevitable clashes recur, the sudden shots of brutality carry a startling kick to them.

Takeshi’s second film, Boiling Point (1990), carries this stylistic idea even farther. The story concerns passive gas station attendant and baseball team benchwarmer Masaki (Masahiko Ono) whose one moment of action is a badly timed attack on a rude customer who just happens to be Yakuza. When the gangsters start taking it out on both his co-workers and his teammates, Masaki sets out to buy a gun and take care of the problem. Takeshi is even more oblique in his presentation of violent action and spends the middle of the film on a strange, rambling subplot involving a disgraced mobster (Takeshi again, this time in a supporting role as a fun loving brute with a penchant for rape) and his mission of revenge. The narrative almost dissolves in abstractions and digressions before the startling conclusion, but it remains a compellingly warped look at the uniquely Japanese culture of violence.

Violent Cop is a classic Japanese gangster tale shaped into Kitano’s unmistakably warped reflection of cops and criminals culture with startling style and his charismatic presence, and is easily the bigger audience pleaser. Boiling Point isn’t as compelling but is in some ways more challenging and inventive. In these films he completely transformed the genre screenplay, a cops and gangsters tale of corruption and revenge, into a jaundiced, cynical vision.

In Japanese with English subtitles. Not rated.

On disc and SVOD through Amazon Video (Violent Cop

) and other services. Availability may vary by service.

Both are newly mastered for their respective Blu-ray debuts and new DVD editions. Violent Cop includes the 20-minute featurette “That Man Is Dangerous: The Birth of Takeshi Kitano” and trailers. Boiling Point also includes the 20-minute featurette “Okinawa Days: Takeshi’s Second Debut” and the trailer. Both are in Japanese with removable subtitles and come with a booklet featuring an essay by Tom Vick. The covers, however, are admittedly pretty hideous.