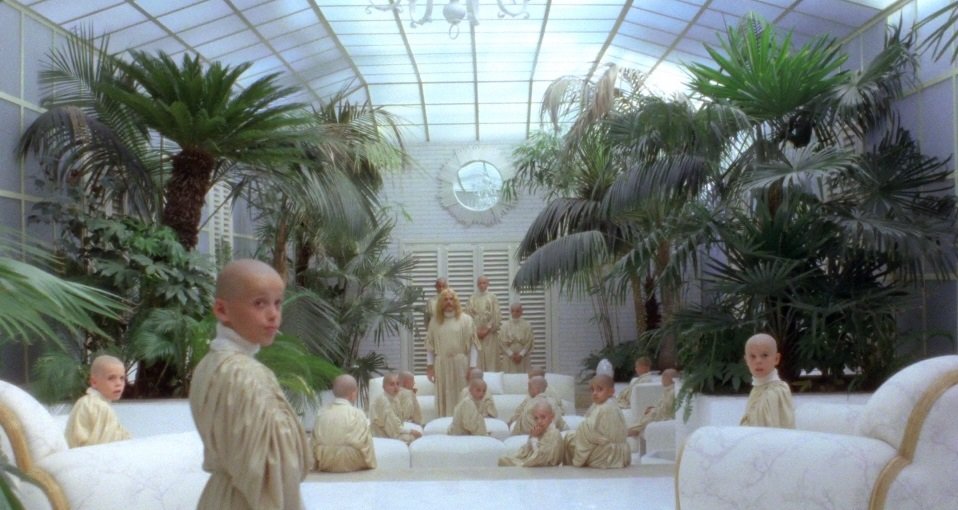 The Visitor (1979, an Italian giallo-esque supernatural horror with an American cast and a former Fellini assistant taking the directorial reigns with more imagination than storytelling discipline, is not the first Exorcist knock-off to come out of the Italian genre factory. It may, however, be the least coherent.

Opening on Franco Nero as a Django Jesus in a heaven with art direction out of Logan’s Run and populated with bald children, it quickly sends John Huston as a paternal emissary (or maybe a particularly grandfatherly God, who knows?) on mission to stop Santeen from taking over Earth through eight-year-old Katy Collins (Paige Conner, more creepy Bad Seed than possessed Linda Blair). There’s also a helping of The Omen, Carrie, The Birds, and the hall of mirrors of The Lady From Shanghai (among many other films), a basketball game with an exploding dunk shot, an abduction out of UFO lore, and Glenn Ford as a police detective who gets his eye pecked out by a falcon.

Giulio Paradisi (directing under the screen name Michael J. Paradise) came up with the story, which recasts the idea of a satanic thriller as a cosmic battle, and apparently keeps rewriting as it goes along. Katy has vaguely telekinetic powers and a strange sense of humor (in a game of tag at an ice rink she tosses a couple of teenage boys out of the rink and through a plate of glass) and somehow the evil corporate cabal’s mission to have Katy’s mommy (Joanne Nail) spawn even more devil children becomes a campaign of torture that lands her in a wheelchair and worse.

The cast also drops in Shelley Winters as a cranky housekeeper, Mel Ferrer as the corporate devil, Sam Peckinpah as a doctor (completely dubbed into anonymity), and young Lance Henriksen as the Ted Turner of the Apocalypse. Okay, that’s a stretch, but it does actually take place in Atlanta (though most of it is shot in Rome).

Paradisi may not have a clue about directing actors (Glenn Ford walks through his performance in a daze, though in his defense he probably read the script and ended up more confused than ever) but he has picked up a few tricks from Argento on how to move a camera and from Fulci on how to stage a supernatural freak-out. It’s not particularly gory, mind you, and the cut-rate optical effects of the cosmic finale are so slapdash they become abstract, but that kind of works for this oddball trip.

Add to My List on MUBI or to My List on Shudder or stream free on Kanopy, which is available through most public and college library systems.

Also on Blu-ray and DVD and on SVOD through Amazon Video, iTunes, GooglePlay, Vudu and/or other services. Availability may vary by service.
The Visitor [DVD + Digital Copy]