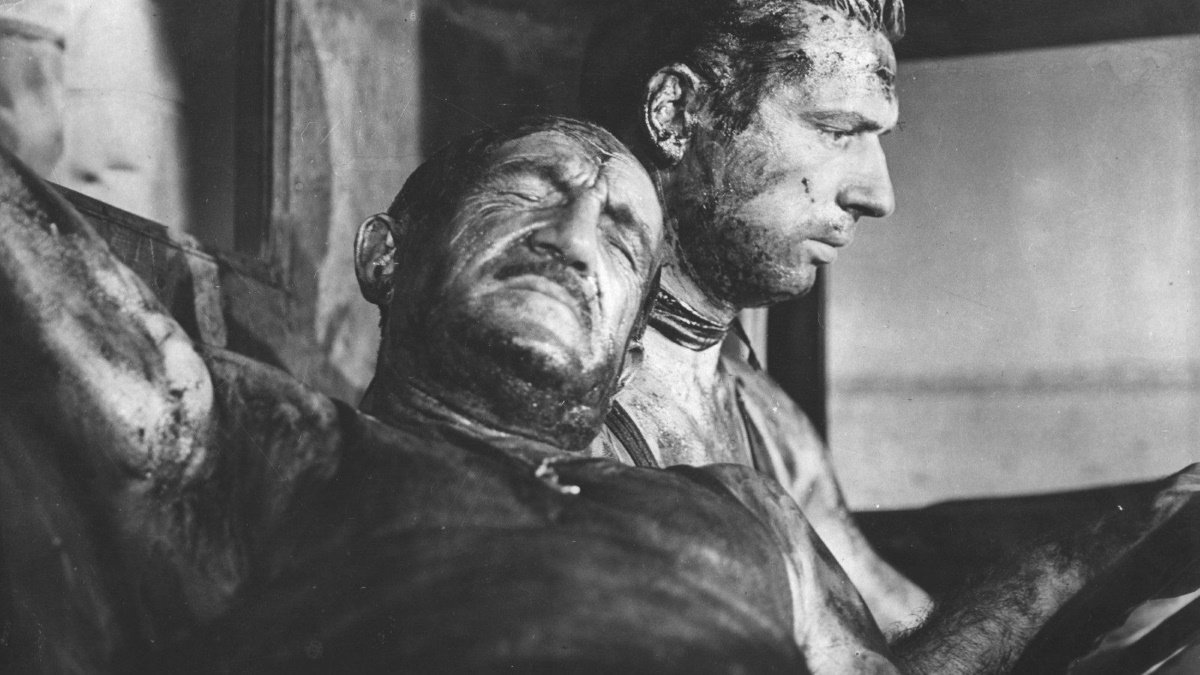 Henri-Georges Clouzot’s gripping The Wages of Fear (France, 1953) throws four men into a primal struggle with the jungle armed with modern machinery and their own nerves and endurance.

The squalid, isolated South American town of Las Piedras is a veritable refuge turned prison for criminals from all over the world. When an oil fire ignites 300 miles away dozens of desperate volunteers apply for the dangerous job of driving highly volatile nitroglycerin across rugged jungle roads for a $2,000 payday, enough to escape their self-created hell.

The bulk of the film charts the grueling, slow moving trek over bumpy, pot-hole dotted dirt roads and worse. A dangerous cutback forces the trucks to back over a rotting wooden platform built over a cliff, a boulder in the road must be blasted away, and river of oil (gushing from a broken pipeline) must be forded, all with one ton of explosive nitro resting in the back of each truck. The ordeal forges a tough-guy trust between German Bimba (Peter Van Eyck) and Italian Luigi (Folco Lulli) but tears Frenchmen Mario (Yves Montand) and former gangland hotshot Jo (Charles Vanel) apart as the tension cracks the once fearless Jo and steels Mario with a newfound grit and tenacity.

Clouzot’s stark, simple imagery and painstaking attention to detail creates a riveting tension that never lets up, intensified by the ruthless drive of Mario who proves he will do anything—anything—to get his truck through. It’s a white knuckle of the top rank.

It won two awards at Cannes and the BAFTA for best film and Clouzot won the Golden Bear for best director at Berlin in 1953.

William Freidkin remade the film as the stylish Sorcerer in 1977.

Add to My List on HBO Max or to My List in Criterion Channel or watch free on Kanopy, which available through most public and college library systems

The Criterion Special Edition Blu-ray and DVD two-disc editions features new video interviews with assistant director Michel Romanoff and Henri-Georges Clouzot biographer Marc Godin, an archival interview with Yves Montand (on working with Clouzot) from 1988, the 2004 documentary Henri-Georges Clouzot: The Enlightened Tyrant (a career retrospective), an analysis of the cuts made for the original 1955 American release, the trailer, and a 24-page booklet with a new essay by novelist Dennis Lehane and interviews with the cast and crew.