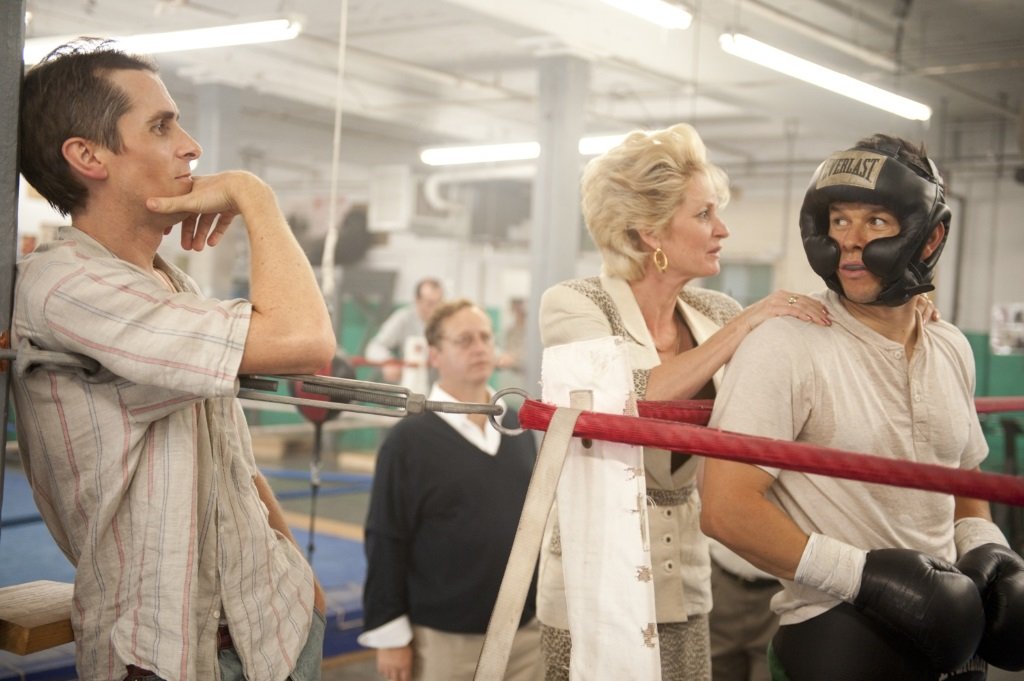 Mark Wahlberg is Mickey Ward, The Fighter (2010) of the title in this true-life late-career comeback story. The younger half-brother of could-have-been contender Dicky Eklund (Christian Bale), the man who once knocked down Sugar Ray Leonard and is now wasting away as twitchy crack addict lost in fantasies of his own comeback, Mickey is the modest, hard-working professional in a family lost in delusions of Dicky’s grandeur.

That’s pretty much Wahlberg’s place in the film as well, playing quiet resilience and tough endurance in the face of his mother Alice’s (Melissa Leo) big talk and reckless mismanagement of his career, which she treats like a temporary meal ticket to be cashed in on short-term fights while waiting for Dicky to get his act together and pretending that he’s not a screwed-up junkie on the road to self-destruction.

The film falls somewhere between bare-knuckle and blue collar, brought to the screen with that docu-style handheld-camera that indie filmmakers so love to use for bracing reality, and Irish family melodrama with Leo as the reigning soloist in the arias of shouting matches and family guilt-trips. Bale and Leo get all the flamboyance here, with Dicky living in a bubble of past glory and present chemical highs and Alice playing the blousy, badgering mother hen of scrappy Lowell, Massachusetts, brood she expects to obey without a peep.

They emerged with matching Academy Awards (as much for the commitment of their performances as the performances themselves, which have won in the not-yet-minted category of “Most Performance”). But Wahlberg is the mortar that holds the film together as Mickey, the son with the talent, drive and tenacity to go the distance, ultimately brings his family together around his shot at the big time.

Add to My List on Netflix or to My Watchlist on Amazon Prime Video or to My List on Paramount+, or stream free on Hoopla, which is available through most public and college library systems.

, iTunes, GooglePlay, Fandango, Vudu and/or other services. Availability may vary by service.
The Fighter [Blu-ray/DVD Combo]

The DVD and Blu-ray+DVD combo pack from Paramount features a low-key commentary track by director David O. Russell and the half-hour documentary “The Warrior’s Code: Filming The Fighter.” The Blu-ray edition adds nearly 17 minutes of deleted scenes (with optional commentary by Russell) and the eight-minute featurette “Keeping the Faith,” about the real-life stories of Mickey and Dicky, plus a bonus DVD and a digital copy of the film.

Pingback: What to stream: 'Eighth Grade' on Amazon, twin 'Fyre's on Netflix and Hulu, Robert Redford on VOD - Stream On Demand
Comments are closed.