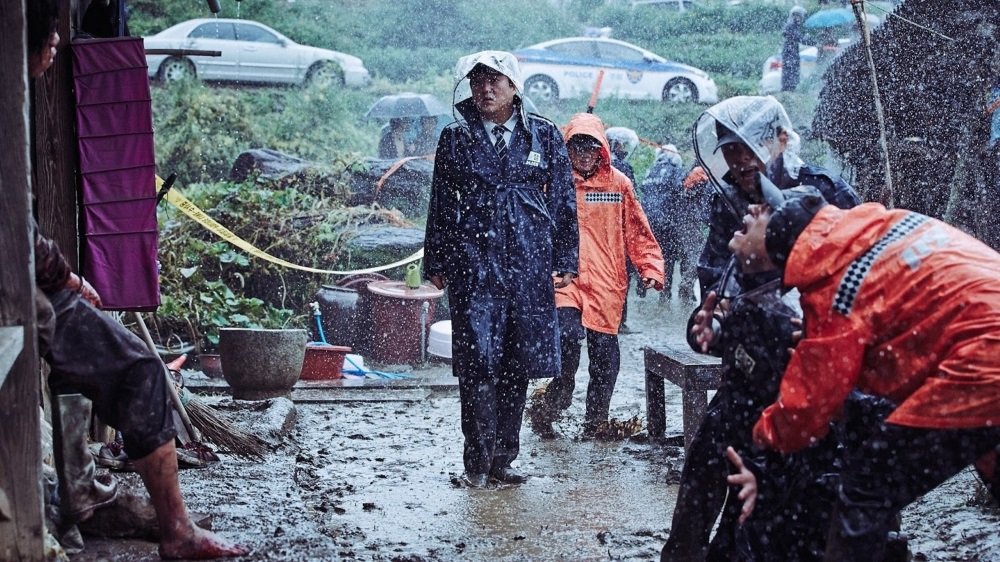 The Wailing (South Korea, 2016) is a thriller that takes a dark turn into supernatural horror.

Kwak Do-won is Jong-goo, a somewhat dim underachiever cop who is way over his head investigating a double homicide in his little town. Jong-goo isn’t too bright but he’s a doting father to his smart little girl and there’s still a little spark in his marriage, even if they have to sneak off like a teenager to the backseat of their car to have a little private time.

He’s gobsmacked by the bloody crime scene, unnerved by the sight of a silent woman who appears at each crime scene like a demonic spirit, and unsettled by the enigmatic Japanese traveler living in the hills (Jun Kunimura). They are all clearly interconnected and as the body count increases and an inexplicable plague of untreatable illnesses build he puts his attention to the Japanese man with a hidden shrine of incriminating photos. Is he a shaman or a villain, and is this a serial killer spree or demonic possession?

This is dark and disturbing and surprisingly long—over 2 ½ hours—and directed with a slow build that churns up the tension as it shifts suspicion around. Filmmaker Na Hong-jin is the director of The Yellow Sea and The Chaser, two of the more sophisticated thrillers to come out South Korean cinema, and he does a nice job of putting his horror in the material world of modern life. Na splashes the crime scenes with blood and gore and suggestions of unimaginable violence perpetrated on the victims, and he captures weird scenes of unnerving behavior that could be evidence of dark forces at work or simply fevered imaginations at work.

But it’s when Kwak’s pre-teen daughter develops a rash and starts spouting filthy language with a ferocious rage that comes and goes like a fever (recalling nothing less than The Exorcist) that the horror really hits home for Kwak, who tosses aside police procedure and overcomes his innate cowardice to save his daughter. That’s not entirely reassuring, mind you. Where American horrors tend to provide us with earnest cops and wise religious figures, this film (like an earlier, non-horror South Korean thriller, Memories of Murder) offers no such comforting protagonists or confident insights to the supernatural origins of the inexplicable events. And when things get really weird and twisted in the third act, the brakes are off on this ride.

In Korean and Japanese with English subtitles. Not rated.

Add to My Watchlist on Amazon Prime or to My Stuff on Hulu or to My List on Shudder. Also free on Hoopla, which is available through most public and college library systems.

, iTunes, GooglePlay, Fandango, Vudu and/or other services. Availability may vary by service.
The Wailing [DVD]