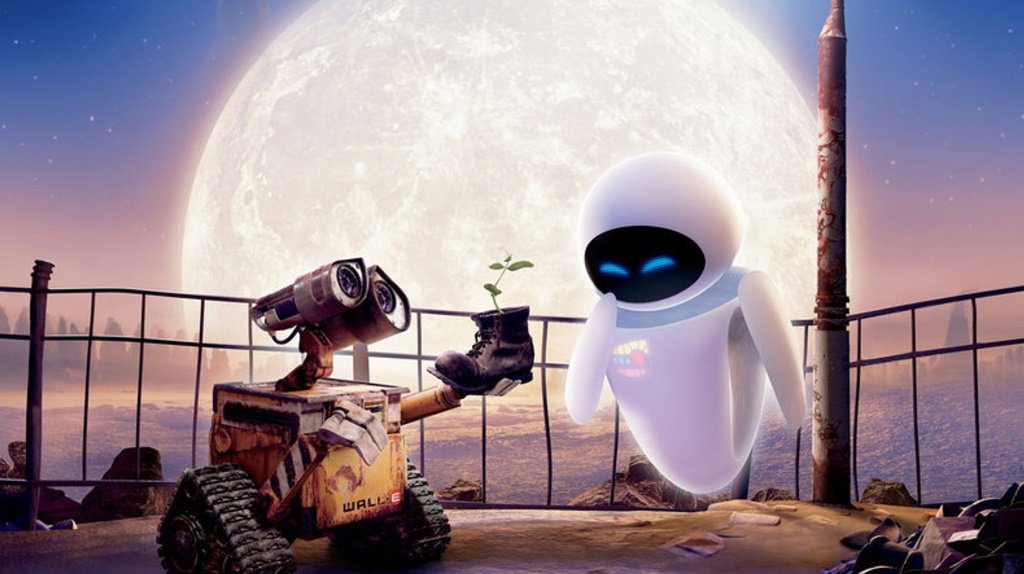 An animated robot love story with an environmental theme and a slapstick delivery, WALL•E (2008) is a charmer of a film and a delightful piece of storytelling. Directed by Andrew Stanton (Finding Nemo) with the animation wizards at Pixar, it takes on the challenge of delivering an animated feature that is predominantly wordless (and even some of those used are closer to sound effects than dialogue) and succeeds with both creative humor and visual grace.

WALL•E is a little mobile trash compactor who putters around a junked and abandoned Earth, sharing his days with a skittering cockroach and finding his pleasures in the little treasures he scavenges from his loads.

The nervous little guy has evolved a personality over the centuries, which makes his isolation all the more poignant as he pines for someone (something?) with whom to hold hands (or whatever you call his clamp-like digits). And so he falls in love with a sleek, specimen-gathering pod named Eve and follows her back to her ship, becoming one of those unlikely heroes whose pluck and perseverance overcome impossible odds.

With its long, wordless scenes and mix of slapstick gags and delicate mechanical dances, it doesn’t look or feel like your usual animated feature by Pixar or anyone else, at least until WALL•E finds himself with the physically inert future of the human race. It’s almost like two movies cut together, one with the robots and a somewhat more obvious and less magical one with the fat and complacent mankind willingly bound to a luxury liner spaceship.

The mechanical heroes are more expressive and more engaging than the tubby humans, solely through the mechanics of robot eyes and body language and a symphony of beeps and whistles. If it reminds you of a certain little iconic robot from a hit space opera epic, it’s no coincidence. Star Wars sound designer Ben Burtt not only does the audio honors here, he’s credited as the voice of WALL•E.

It’s like Looney Tunes meets Fantasia, a genuine joy for kids and adults alike. Adults will pick up on a social satire in the portrait of a sedentary population lulled to distraction by a non-stop stream of media signals and small talk while the kids won’t miss the message of ecological responsibility, but the bright gags and childlike expressions of robot affection are so joyous that you can be completely charmed without even noticing the themes.

It was nominated for six Academy Awards and won Oscar, BAFTA, Golden Globe awards for the best animated film of 2008.

The DVD release includes two bonus animated shorts – the hilarious Presto (a daffy battle of wits between a stage magician and the rabbit which played before the film in theaters) and the new BURN•E (which takes place in the margins of WALL•E’s odyssey) – but if you want to want to learn why Pixar creates such magic, explore the supplements: the commentary by director Andrew Staunton, the superb “Animation Sound Design: Building Worlds from The Sound Up” (a journey through the technical wizardry and artistic creativity behind the magnificent sound design hosted by Oscar winner Ben Burtt) and the deleted scenes with Staunton explaining the hows and whys. There’s much more on the “Special Edition” releases: interactive games and activities for the kids, the terrific “WALL•E’s Treasures and Trinkets” (five minutes of original short visual comedy gags), more excellent featurettes that illustrate just how much research, development, experimentation and detail goes into every aspect of the film, additional deleted scenes and Leslie Iwerks’ feature-length documentary “The Pixar Story.” The density of detail and grace of the animation is served well by the Blu-ray edition, which offers a tremendous level of clarity and even more supplements, notably a “Cine-Explore” addition of picture-in-picture illustrations accompanying the commentary and an alternate “Geek Track” commentary with four Pixar nerds discussing the film (with their silhouettes on screen a la MST3K). These are among the most involving and original supplements you’ll find on a DVD.