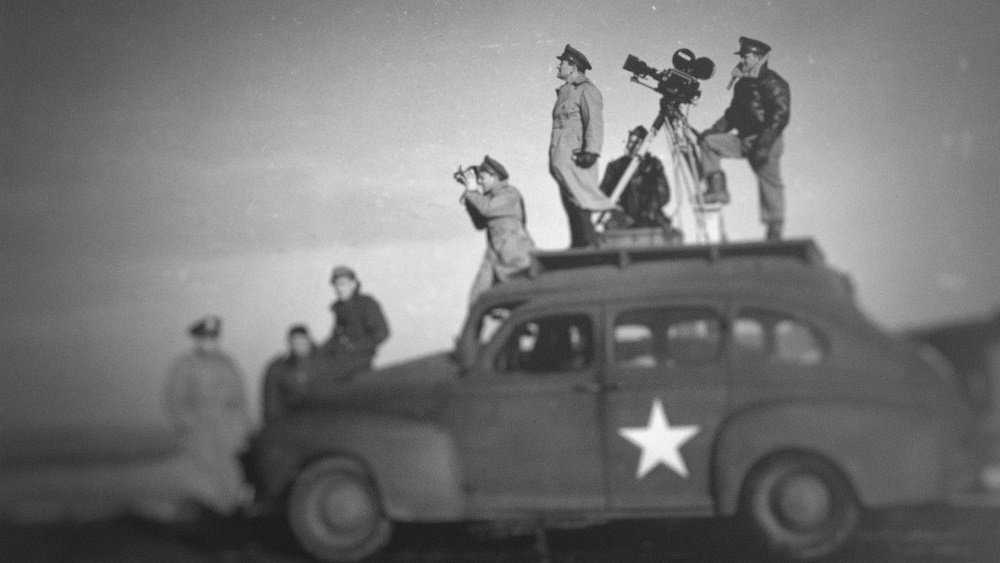 In conjunction with the premiere of the original documentary Five Came Back, the story of how Hollywood’s great filmmakers went to war as filmmakers for the armed service in World War II, Netflix has made a number of the documentaries featured in the production available on Netflix. Here’s a guide to some of the highlights.

Most of these films were shot on 16mm, many of them under combat conditions, for educational and institutional purposes. There was no thought to posterity and no effort made to preserve them for decades. As such, they will appear rough and worn and in many cases damaged. Those are accurate reflections of the production reality under which these films were made and shown.

The first documentary completed and released by the five featured filmmakers was The Battle of Midway (1942) from John Ford. The 1942 battle was the first major American victory in the war and a decisive defeat for the Japanese (who lost four aircraft carriers in the three-day battle), and the 18-minute documentary that Ford created from the footage that he and his unit shot in the heat of battle provided the first glimpse of actual American servicemen in battle in World War II. “Yes, this really happened,” informs one of the film’s four narrators during the combat section of the film, but audiences didn’t need to be reminded. The authenticity was evident. One bomb landed so close that it knocked both Ford and U.S. Navy Photographer’s Mate First Class Jack MacKenzie Jr., his assistant, off their feet, momentarily knocking Ford unconscious and leaving him with a deep gash in his arm (he earned a Purple Heart for his service that day). Both got back up and resumed filming. That raw footage, complete with the camera getting bounced around and the film knocked out of the gate, was included in the finished film, which adds to the power of the presentation. Though produced for military audiences, the film was released to civilian theaters and it won the Oscar for Best Documentary in 1943—the director’s fourth—and gave audiences the first color footage of the war. Echoes of the film can be seen in They Were Expendable (1945), Ford’s dramatized portrait of the war in the Pacific starring John Wayne and Robert Montgomery.

John Ford also directs one of the more unusual films in the curated collection: Undercover: How to Operate Behind Enemy Lines (1943). The hour-long production, a how-to film woven into a dramatic narrative, was the first film to teach practical spycraft to wartime intelligence agents and was made for OSS personnel only, unseen by civilians until it was eventually declassified. It’s a utilitarian production that teaches lessons in preparation, proper behavior, and attention to detail through the examples of two agents—the conscientious, modest, careful “Student Al” and the arrogant, impulsive, showboating “Student Charles” (“just the kind of agent you aren’t going to be,” advises the narrator)—and Ford directs with more attention than such films usually receive. Generic sets and backlot locations give it the production values of a cheap poverty row B-movie and a cast of nobodies delivers performances between stiff and stereotype but simple but effective camerawork gives otherwise static scenes a little visual flair and basic crosscutting and narrative digressions move the lesson along while illustrating a point. It also features Ford’s only onscreen appearance in a dramatic role, playing an OSS agent who, under the guise of a businessman in a fake office, give student Charles his evaluation and his orders. His performance might not pass muster against a professional cast from one of his Hollywood pictures, but he’s just fine next to the budget-minded cast of this training film.

Queue it up: Undercover: How to Operate Behind Enemy Lines (1943)

John Huston made four films during his service and you can see his changing perspective on war through the three productions on Netflix. Report from the Aleutians (1943) shows the routine of military life at a remote base in the frigid Aleutian Islands between Alaska and Russia (it’s also his only film shot in color), but his tone becomes darker in San Pietro (1945), which documents the battle to take a small Italian village from the occupying German forces. Huston provides the ironic narration himself over the record of destruction and loss of life on a single battle. The scenes of bombed-out ruins and dead soldiers are real but the battle itself was restaged by Huston for maximum dramatic impact. The military chose not to show the film to civilian audiences but new recruits did watch the film to understand the grueling ordeal awaiting them in battle. The film was voted into the National Film Registry in 1991.

Let There Be Light, his final film, turned the cameras on Mason General Hospital on Long Island, a racially integrated psychiatric hospital where soldiers suffering from psychologically scars underwent treatment. It was the first film to explore “psychoneurotic” damage, what today is known as post-traumatic stress disorder (PTSD), and attempt to share the difficulty of soldiers returning from combat to civilian life with the public. That was not to be. The film was suppressed by the military brass. Not because it was inaccurate or insensitive, mind you, but because the portrait was too frank and too sensitive. And maybe for other reasons. It showed black and white soldiers living and working in group therapy sessions together, proving that integrated military life was not only possible but could be conflict free at a time when the rest of the military was still segregated. It showed how vulnerable humans were to the psychological trauma of war. And for all the healing shown in the film, a shadow of the nightmares never quite leaves the lives of these soldiers.

The film was censored for 35 years and restored just a few years ago. Netflix does not have the restored edition, unfortunately, but you can stream it for free from the National Film Preservation Foundation website (but please do consider making a donation).

Frank Capra entered the Army Signal Corps, which had been in charge of filmmaking within the services since 1929, with big plans to turn make productions that entertained and engaged the young and often uneducated soldiers while delivering information. In addition to training films, he was charged with making documentaries about the origins of the war for new recruits, profiles of America’s enemies and allies, a newsreel film magazine for the soldiers, and the Why We Fight series, documentaries that he hoped to get to civilian as well as military theaters. Working with director Anatole Litvak, he won an Oscar for Prelude to War (1942), the first of seven films in the Why We Fight series (which also included The Battle of Russia, 1943), and outside of the series made Tunisian Victory (1944) and Know Your Enemy – Japan (1945).

Capra was particularly committed to The Negro Soldier (1944), a film that was to show African Americans why this was their war too and to remind white soldiers and civilians that African Americans were both fellow citizens and soldiers. Racism was still rampant in the U.S. in general and the south in particular and the armed services were still segregated. Director Stuart Heisler worked with Carlton Moss, a young black playwright, to develop a script that avoided the issue of racism altogether to get past resistance among the top military officials. Their film was a rallying cry aimed at encouraging the black population to enlist, but the film was praised in both the black and white press for its respectful portrait of black Americans. It shows black soldiers go through induction and basic training, at rest and play on the army base, even dancing at an all-black USO club. In fact, it shows no integrated activities all, yet in an era when African Americans on the big screen were invariably subservient stereotypes or caricatured comic figures, it presented black men with dignity and respect as everyday Americans no different than white men. Capra biographer Joseph McBride proclaimed the film as an important step in the eventual integration of the armed services: “The Negro Soldier—as mild as it was—played a significant role in the breaking down of the Army’s racial prejudice and helped pave the way for the desegregation of the Army in 1948.” In 2011, the film was selected for preservation in the National Film Registry.

William Wyler’s Memphis Belle: The Story of a Flying Fortress (1944) is the portrait of B-17 bomber crew on its final mission (it was actually shot over multiple missions, all of them with Wyler accompanying them in combat), a film that showed audiences both a crew working together under fire and the boys behind the uniforms. He nearly went deaf making Thunderbolt (1947) aboard a B-25.

George Stevens accompanied the troops that liberated Dachau, the first Nazi concentration camp that anyone in the unit had seen. No one was prepared for what they saw—they had no idea such atrocities were being committed by Hitler’s military—but Stevens made sure those atrocities were documented and the footage was used in the Nuremberg trials. Some of that footage was presented in the documentary Nazi Concentration Camps (1945).

Queue it up: Nazi Concentration Camps

These films are all in the public domain and are also readily available on YouTube. A simple search should find them.