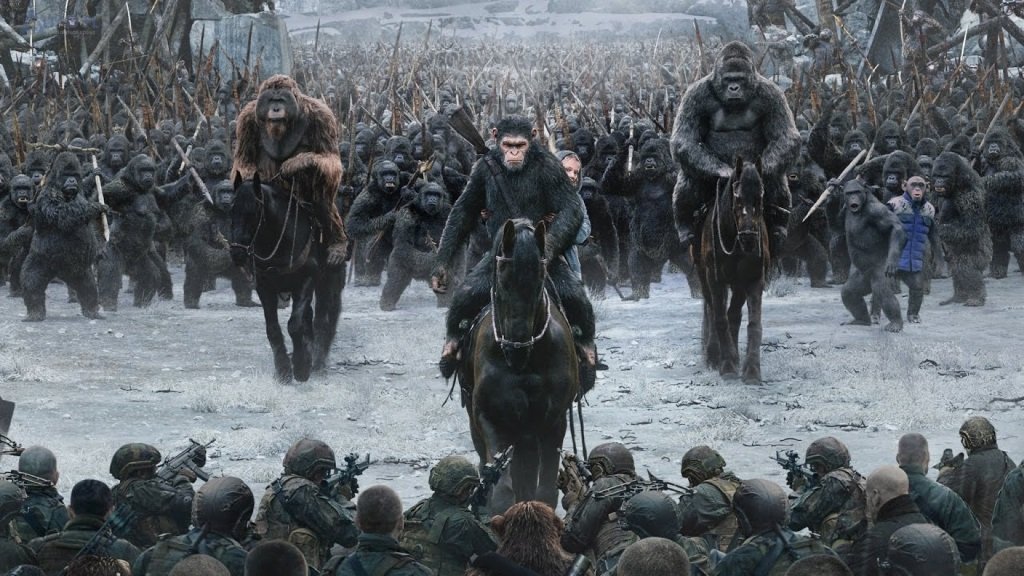 Who would have predicted that the second revival of the Planet of the Apes series would be so smart, so moving, so… human? Whatever your feelings on the 1969 original, at the time a startlingly unique film built on a warped-mirror fantasy premise, the sequels were exercises in diminishing ambition and the ridiculous 2001 Tim Burton remake is best forgotten.

War for the Planet of the Apes (2017), the third film in what has become a remarkable trilogy (though more may be on the way), is co-written and directed by Matt Reeves, who wrote and directed Let Me In (a rare remake that improves upon the foreign original) and directed Dawn of the Planet of the Apes (2014), which took the story developed in Rise of the Planet of the Apes (2011) and transformed it into a beautiful and devastating metaphor for racism, tribalism, and hatred fueled by fear of anyone different. The ideas are grounded in story and character and presented in a drama of Biblical proportions, complete with Cesar (Andy Serkis), the ape who speaks and leads the simians out of human bondage, as both messiah and Moses to his people, and Reeves anchors our sympathies with the hunter-gatherer race of intelligent apes, who just want to live in peace, preferably apart from the specie-ist human race.

War is set a few years after Dawn and stars Woody Harrelson a zealot called The Colonel (and who seems to be the offspring, or at least a disciple, of Kurtz from Apocalypse Now) who commands a renegade militia on a mission to destroy the apes to save mankind. But first he imprisons them and turns them into slaves and the imagery evokes both the worst injustices of American slavery and the horrors of Nazi concentration camps. Perhaps the decline of the human race, which is succumbing to some inexplicable condition between viral disease and devolution, is God’s final judgment on a species that answers everything with violence.

Serkis once again proves a master actor in the realm of performance capture, creating a full, rich, nuanced character through body language and facial expressions that provide not just the skeleton of the finished CGI character but the guide for the animators (who earned an Oscar nomination for their visual effects work). He’s just one of the characters brought to fully dimensional life— Karin Konoval returns as the gentle orangutan Maurice, Cesar’s loyal confident, and Terry Notary is his loyal lieutenant Rocket, and Steve Zahn joins the band as a former circus animal with the name of Bad Ape, all full characters with personalities and emotions and complex relationships—but he is the most powerful. We see the torment that drives his vengeance against the man who declared war on his race and murdered his family and duty as leader of his people, and the struggle between his rage and the compassion that still guides his actions. Even in the face of human hatred, he cannot leave an orphaned human girl (Amiah Miller) behind, and he can’t be anything but kind to her.

War for the Planet of the Apes is a war film in its way, but it’s also story of friendship and devotion, of mourning and duty, and of maintaining humanity in an inhuman situation. Though that can’t be the right word in this film, not when all the things we mean by the term “humanity” are embodied by the simian characters. It is also a magnificent cap to the story to date. Who’d have predicted that the prequel to a 1968 movie about a planet of simians who speak like humans would become the most intelligent franchise of the new century?

Watch it on HBO Now, HBO Go, and HBO On Demand

, iTunes, GooglePlay and/or other services. Availability may vary by service.
War For The Planet Of The Apes [Blu-ray]

War For The Planet Of The Apes [DVD]

War For The Planet Of The Apes [Blu-ray 3D]

War For The Planet Of The Apes [4K Ultra HD]

The DVD and Blu-ray features commentary by filmmaker Matt Reeves, the 12-minute featurette “All About Caesar,” and an art gallery. The Blu-ray editions also include 10 deleted scenes with optional filmmaker commentary, the half-hour documentary “Waging War for the Planet of the Apes,” and the featurettes “WETA: Pushing Boundaries” on the special effects (10 mins), “Music for Apes” on the score (6 mins), and “Apes: The Meaning of It All” (20 mins) and “The Apes Saga: An Homage” (7 mins) which go back to the original 1968 film.