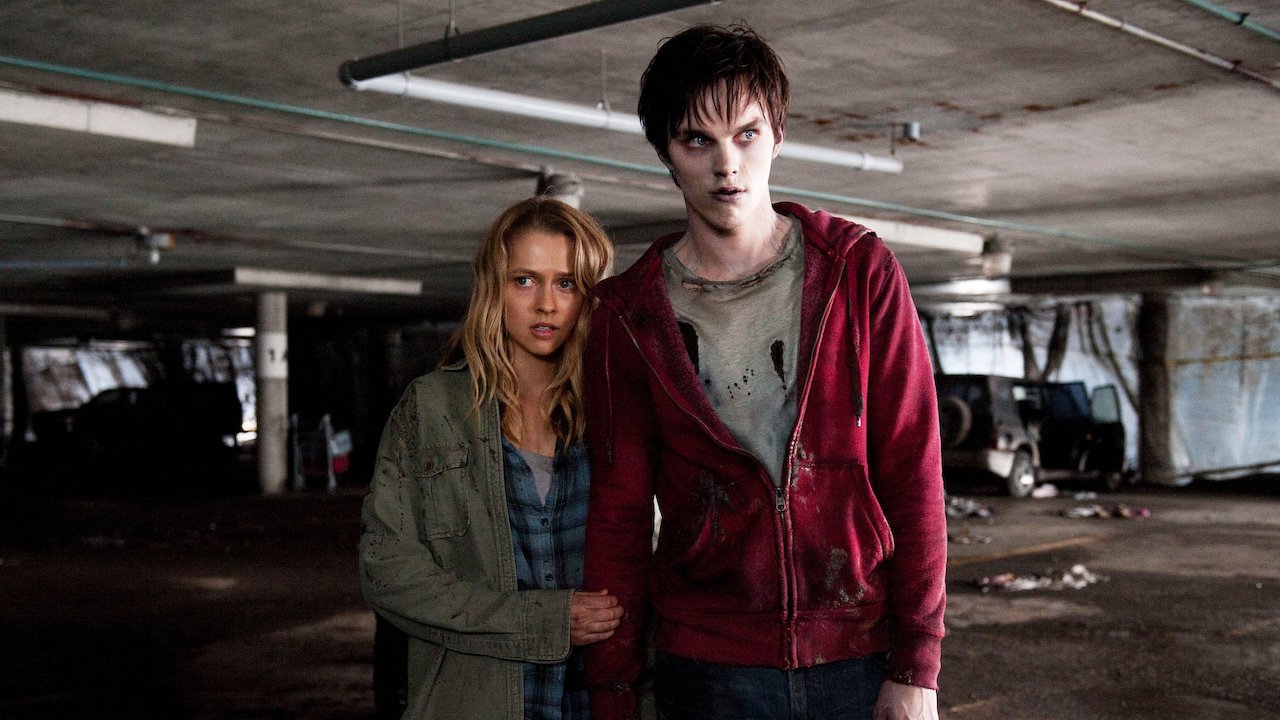 Warm Bodies (2013) may not be the first zombie romantic comedy (or rom-zom-com, as the genre has been so dubbed), but it’s the first one that went mainstream throughout the multiplexes.

In the near future of a zombie Armageddon, a concept so familiar to moviegoers that the film needs to do very little preamble to set the scene, a self-aware, dissatisfied zombie named R (Nicholas Hoult) is jolted out of his numb existence and instinctive killer reflexes by love at first sight (a dynamic and charming Teresa Palmer), with the help of borrowed memories and his own deeply-buried yearnings for something better. The jolt of emotion kick-starts his dead heart, and all the attendant romantic ideals that come with it.

Zombies have always been a blank slate of a horror movie monster, available for any number of metaphors that a director could apply. Director Jonathan Levine, who adapts the novel by Isaac Marion, has fun contrasting the blank surface with a self-aware narration from R, the nimble, still human mind behind the shuffling body and irresistible instincts to devour living flesh. Hoult does nice work with his eyes, the only part of his body that really seems to have human reflexes, and Palmer is spirited, curious, and most of all self-possessed enough to try to fathom what exactly is going on when this undead eating machine suddenly saves her life and tries to small talk with moans and grunts.

It’s an inconsistent film that leans on plenty of other clichés that aren’t upended with the same compassion. John Malkovich is still being John Malkovich regardless of what the role calls for, and the humor sometimes gets mired in the shuffling pace of its zombie hordes, but despite all that it’s just so darn likable. Levine has a facility for offbeat takes on familiar stories and he goes for humor over horror here, helped immensely by the genial chemistry among both the human survivors and the shuffling undead.

Also on Blu-ray and DVD and on SVOD through Amazon Video, iTunes, GooglePlay, Vudu and/or other services. Availability may vary by service.
Warm Bodies [Blu-ray]
Warm Bodies [DVD]

The Blu-ray and DVD releases feature commentary by director / screenwriter Jonathan Levine with actors Nicholas Hoult and Teresa Palmer, deleted scenes with optional director commentary, and eight featurettes, covering everything from the origins of the production to the cast to the make-up to behind-the-scenes video shot by Palmer. Also features “Zombie Actin Tips” by Rob Corddry and a gag reel.