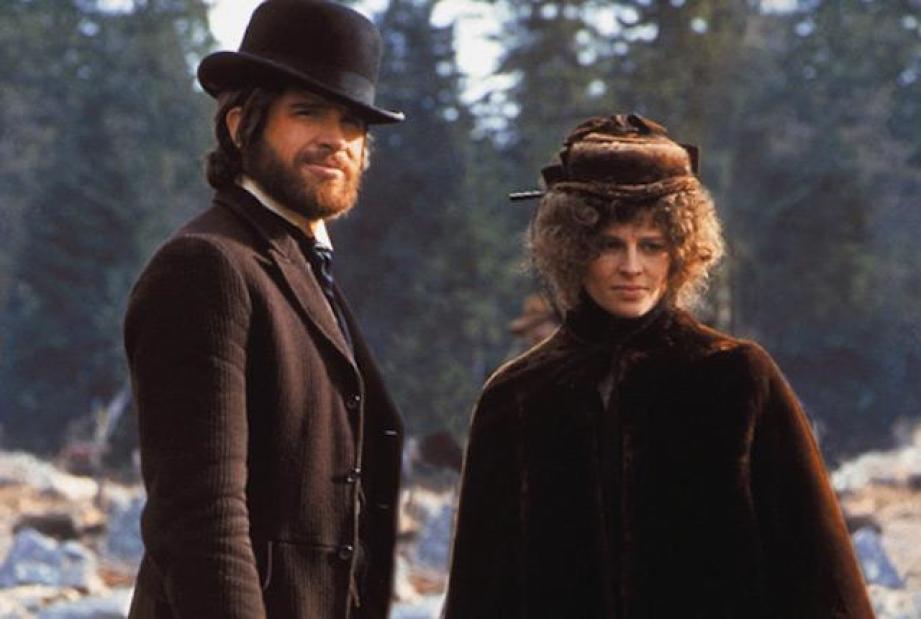 McCabe & Mrs. Miller (1971), Robert Altman’s third film since staking out his claim on 1970s cinema with M*A*S*H (1970), turns the western myth into a metaphor for the fantasy of the American Dream colliding with the power of big business.

Warren Beatty is John McCabe, a drifting gambler who rides into the mining camp town of Presbyterian Church (named after a building that has yet to open for business), surveys the possibilities of the muddy streets and rough-hewn buildings carved out of the Oregon wilderness (Vancouver, Canada, stands in for Oregon), and stakes his claim as the slick sophisticate to give these hicks the delights of civilization, namely a whorehouse and a well-lit bar with clean floors and fancy furniture.

Julie Christie (in an Oscar-nominated performance) is Constance Miller, a veteran hooker who hitches a ride on a steam-powered tractor and pitches McCabe a partnership. She comes on strong and knowledgeable, a professional with plenty of management experience, but look carefully in the scene where McCabe negotiates for a handful of haggard prostitutes and you’ll catch her through a doorway, just another bordello working girl taking a break. Altman does nothing to draw our attention to her but it’s the only backstory we get and you can just imagine her hatching a scheme to escape her dead-end trajectory and roll the dice on this flashy backwoods businessman who has more ambition than talent.

McCabe plays the would-be frontier tycoon for the miners, striding the camp in his fox-red fur coat and Eastern bowler hat, but Mrs. Miller is the brains behind his success. That’s clear when the corporate mining concern sends in it negotiators (Michael Murphy and Antony Holland) to buy up the town and McCabe plays the hard-sell dealmaker in an ultimatum dressed up in polite ritual.

That’s the plot upon which Altman hangs his film, both a western and an anti-western, defined as much by the communal cast that mills through the picture and mutters dialogue in the swirling pools of sound as by the story of its charming but over-his-head hero McCabe and the caustic Miller who escapes nightly in a cloud of opium. This was the first major film shot by Vilmos Zsigmond, who fled Communist Hungary in 1956 and spent a decade shooting cheap exploitation pictures and the occasional independent effort, and he helps Altman establish his signature style with the film. The camera prowls and floats through scenes with a gentle restlessness, constantly catching character bits and defining details, as if it were as much a character in Altman’s company as the actors (Rene Auberjonois, John Schuck, Bert Remsen, Shelley Duvall, and Keith Carradine, among others). The colors are muted and the palette earthy and dark, giving the image the look and feel of no other western.

Altman shot as he built the town, hewn out of the mud and trees outside of Vancouver, BC, and he incorporated its creation and growth as part of the film, right down to the half-constructed buildings that are slowly finished. It’s our only real measure of time passing in a place where clocks and calendars are less important than seasons and sunsets. Time just washes along and people like McCabe and Miller either flow with it or get left behind. The soundtrack includes spare songs by Leonard Cohen that haunt the film with a lonely, melancholy quality.

It’s one of Altman’s masterpieces and easily one of the finest American films of the 1970s, and it was added to the National Film Registry in 2010.

Mastered for Criterion special edition Blu-ray and DVD from a new 4K digital restoration and presented with an uncompressed monaural soundtrack. A lot of newly restored films show a marked difference from previous versions but the very nature of the film’s photography, which was systematically desaturated by cinematographer Zsigmond with a method called flashing to evoke an earlier time, means that the improvements are not as obvious. The colors are muted and somber with a dipped-in-amber look (the scenes in the Irishman’s bar have the golden look of candles and lamplight creating pools of illumination in the night) and the image looks softened, as if seen through the light haze of history. That’s a palette that can cause issues in mastering—the film grain is more pronounced and the digital transfer can exaggerate that grain into an overactive storm in the shadows—and Criterion does a great job of preserving that quality. You get a richer texture (and this film has amazing textures) and a greater range of detail and color.

Produced for this edition is a terrific 55-minute documentary “Way Out on a Limb,” featuring new interviews with actors René Auberjonois, Keith Carradine, and Michael Murphy, casting director Graeme Clifford, and script supervisor Joan Tewkesbury, and a 37-minute conversation between film historians Cari Beauchamp and Rick Jewell. There are also archival interviews with Vilmos Zsigmond (conducted in 2005 and 2008 and used in the film No Subtitles Necessary: Laszlo & Vilmos) and an archival conversation between production designer Leon Ericksen and art director Al Locatelli with fellow production designer Jack De Govia discussing McCabe at the Art Directors Guild Film Society in Los Angeles in 1999. There are also two archival segments from The Dick Cavett Show from 1971 featuring Pauline Kael (making a case for the film) and, in a later show, Altman, and a gallery of still shot on the set of the film by photojournalist Steve Schapiro.

Carried over from the 2002 DVD release is commentary by director Robert Altman and producer David Foster (recorded separately but edited together for good effect) and a 10-minute promotional behind-the-scenes documentary from 1971.