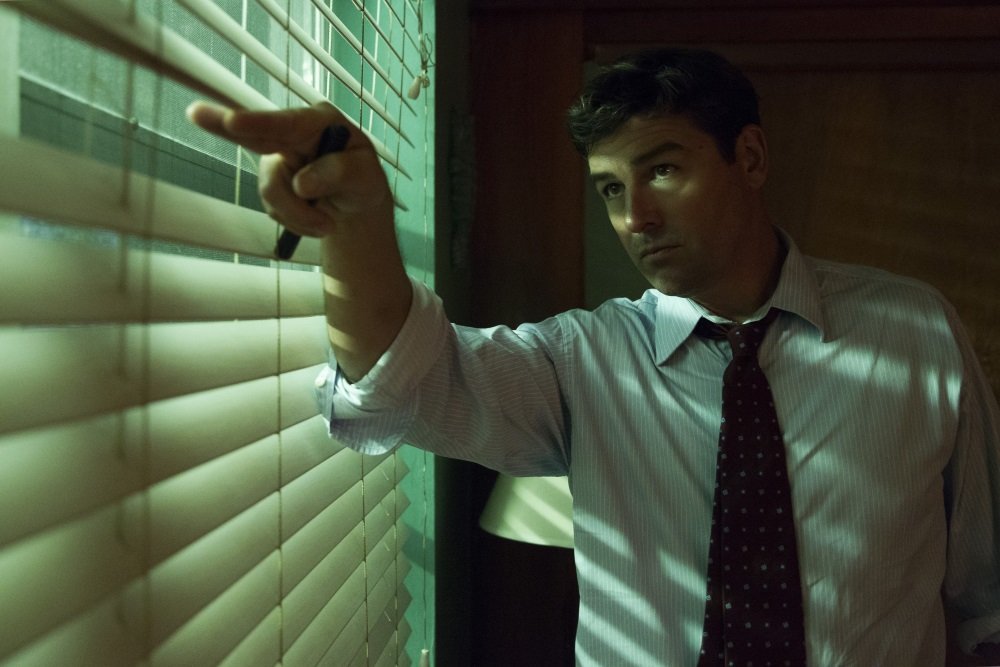 The Netflix original drama Bloodline, a family crime thriller set around a family-run hotel in southern Florida, returns from a dramatic Season One finale that left one sibling dead at the hands of the others. The second season goes darker as the Rayburn clan tries to live with their crimes and their secrets begin to unravel.

“Not everything on Bloodline works. It traffics in the implausible too often…. And, as with last season, the story is too slow to get where it’s going. But something about Bloodline’s moody slipperiness, the syncopated way it metes out information, has me hooked again,” writes Vanity Fair TV critic Richard Lawson. “[I]f you’re looking for something that rewards a patient binge, Bloodline gets more and more transfixing as it goes, a series of unfortunate events that lulls and persuades with a beachy whisper.”

Kyle Chandler, Ben Mendelsohn, Linda Cardellini, and Sissy Spacek star, and John Leguizamo and Andrea Riseborough join the series this season as shady characters that threaten to pull the secrets from the shadows. 10 episodes.

It’s the old Gods versus the One God on VOD this weekend. Gods of Egypt brings superhero movie spectacle to ancient myth and legend for a battle between Horus (Nikolaj Coster-Waldau) and Set (Gerard Butler). The gods and mortals line up accordingly. Call it “Old Gods: Civil War.” PG-13. The disc version comes out next week.

Risen, the most recent Gospel-inspired drama, stars Joseph Fiennes as a Roman Tribune investigating rumors of the resurrected Christ. It’s the resurrection as police procedural as the Tribune interviews the witnesses. Tom Felton (from the Harry Potter films) is the Tribune’s partner. PG-13.

Ben Stiller and Owen Wilson are back on the runway as Derek and Hansel in the comedy Zoolander No. 2: The Magnum Edition, but you’re better off streaming the funnier, original Zoolander (2001) on Netflix. Both PG-13.

Also new: the romantic comedy How to be Single with Dakota Johnson, Rebel Wilson, and Alison Brie (R), the based-on-a-true-story rescue thriller The Finest Hours with Chris Pine, Casey Affleck, and Ben Foster (PG-13), the horror movie Bleed (not rated), and the bawdy Italian black comedy Wondrous Boccaccio, a new take on “The Decameron” from Paolo and Vittorio Taviani (not rated, Italian with subtitles).

Benedict Cumberbatch stars in the 2005 BBC mini-series To the Ends of the Earth as a British aristocrat who travels to Australia in 1812. Jared Harris and Sam Neill co-star.

The Do-Over (2016), the second original Adam Sandler comedy in his Netflix deal, co-stars David Spade and Paula Patton. Not rated and not shown to critics. Never a good sign.

Will Smith stars in The Pursuit of Happyness (2006) and Jaden Smith makes his feature debut as his young son. PG-13.

Blake Lively is ageless, eternal, and lonely in the romantic drama Age of Adaline (2015), which is also on Hulu. PG-13.

The wee ones will rejoice that all seven seasons of Thomas and Friends Classic are in the Amazon station.

From HBO comes the original movies Empire Falls (2005) with Ed Harris and Paul Newman, Hemingway & Gellhorn (2012) with Nicole Kidman and Clive Owen (reviewed on Stream On Demand here), and Phil Spector (2013) with Al Pacino and Helen Mirren. All TV-MA.

On the comedy side, there is Angry Boys: Season 1 (2012) from Australia and the complete run of the cult sketch comedy series Mr. Show with Bob and David (reviewed on Stream On Demand here).

It’s hard to call this a recommendation, but fans of so-bad-it’s-good cult cinema will be pleased to know that Samurai Cop (1991) is now streaming on Amazon. It’s not rated, and it’s ridiculous.

The drama Run & Jump (2013) stars Will Forte as an American doctor in Ireland.

Bryan Cranston reprises his Tony Award winning role as Lyndon B. Johnson in the HBO original adaptation of the Broadway play All the Way, which focuses on his efforts to pass the Civil Rights Act of 1964 after the death of President John F, Kennedy. Not rated.

Available Saturday, May 28 is The Intern with Robert De Niro and Anne Hathaway.

Ethan Hawke stars in Good Kill, a drama that tackles the ethical issues and psychological dimensions of drone warfare. R.