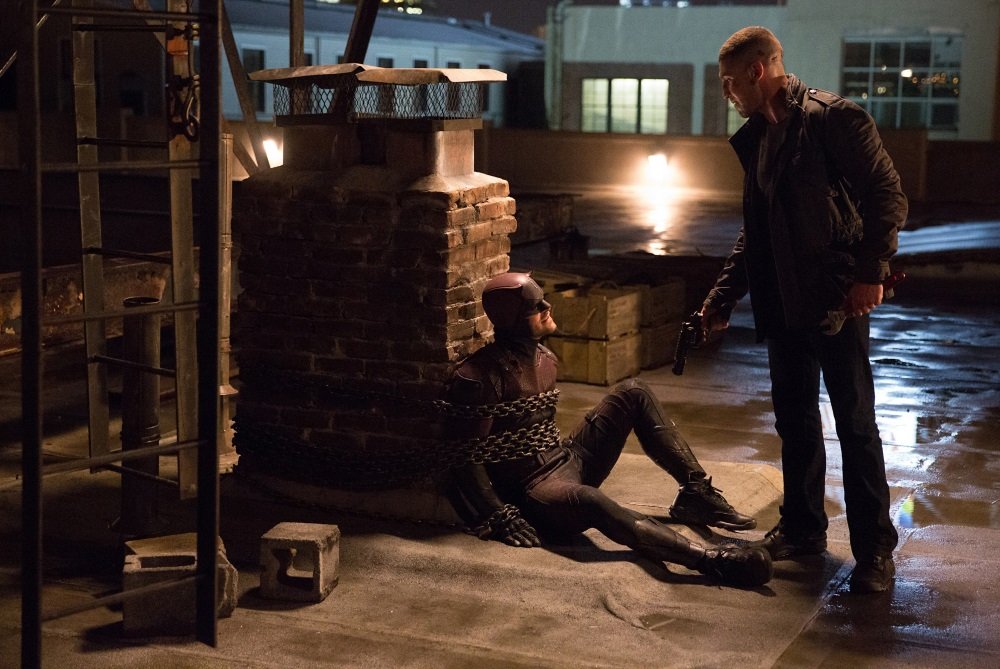 The first season of Daredevil made Netflix a player in the superhero culture. Marvel’s Daredevil: Season 2 returns to the mean streets of Hell’s Kitchen and introduces (or rather, reintroduces) two of the most popular anti-heroes of the Marvel Comics Universe: gun-toting vigilante The Punisher (Jon Bernthal) and Greek Ninja assassin Elektra (Elodie Yung).

Mike Hale reviews it for The New York Times.

Todd Haynes directs Carol, a beautifully-realized adaptation of the novel by Patricia Highsmith (originally titled “The Price of Salt”). It’s a love story between a society woman (Cate Blanchett) separated from her husband and a department store shopgirl and budding photographer (Rooney Mara) in 1950s New York City, where such a love cannot be named. It was nominated for six Academy Awards, including acting nods for Blanchett and Mara, and it is a lovely evocation of the time and place and social fabric. R.

Brooklyn, starring Saoirse Ronan as an Irish girl in America, also sweeps audiences back to the fifties, this time for a coming-of-age drama with a romantic optimism. It earned three Oscar nominations. PG-13.

The Big Short is the funniest film you’ll ever see about the economic crash of the last decade. Which is also its secret weapon: it uses humor to guide audiences through the complex (yet avoidable) factors behind the mortgage bubble. It’s based on the book by Michael Lewis and it took home the Oscar for Adapted Screenplay. Christian Bale, Steve Carell, Brad Pitt, and Ryan Gosling star. R. Also on disc. Reviewed on Stream On Demand here.

Also new: the comedy Sisters with Tina Fey and Amy Poehler (unrated edition) and the kid movie Alvin and the Chipmunks: The Road Chip with Jason Lee and animated singing rodents (PG).

Happily Ever After, starring Janet Montgomery and Sara Paxton as best friend’s reunited after years at Paxton’s wedding, is released exclusively on Cable and Video On Demand.

Available same day as select theaters nationwide is The Program, starring Ben Foster as Lance Armstrong in a story of the doping scandal, the father-son reunion comedy The Confirmation with Clive Owen (PG-13), and the drug-smuggling drama The Preppie Connection with Thomas Mann (not rated).

From the truth is stranger than fiction file comes the documentary Finders Keepers (2015), about the legal battle over custody a severed leg found in a grill in an abandoned storage locker. Of course, the case ended up on a TV court show. R.

Kirby Dick’s acclaimed documentary The Hunting Ground (2015), an exposé of rapes and sexual assaults on American college campuses, earned an Oscar nomination for its song (“Until it Happens to You,” sung by Lady Gaga). And the Netflix original My Beautiful Broken Brain observes a woman learning how to read, write, and speak after suffering a stroke at age 34.

Tom Hanks writes, directs, and stars in Larry Crowne (2011) as a man who goes back to school after getting downsized and Matt Damon is the friendly face of fracking in the anti-fracking drama Promised Land (2012), which Damon also wrote and produced. The comedy The Nanny Diaries (2007) is not one of Scarlett Johansson’s best films but she’s charming in it. PG-13.

For the kids: Chicken Little (2005) is one of Disney’s first original CG animated films. G.

Food Chains (2014), a documentary produced by and featuring Eva Longoria and “Fast Food Nation” author Eric Schlosser, looks at how the supermarket and fast food chains impact low wages for farmhands and produce laborers. No rated.

Anthony Mann’s Raw Deal (1948) is one of the best, and most brutal, low-budget film noirs ever made, yet is also has an odd, haunting quality to it as well, thanks to the narration by Claire Trevor, the loyal girlfriend of angry, vengeful escaped convict Dennis O’Keefe. Raymond Burr plays one of his sleaziest characters ever.

The Roy Rogers film The Golden Stallion (1949), directed by Quentin Tarantino auteur “discovery” William Witney, features Trigger in a major role. Many fans consider this the best Roy Rogers film ever made.

Mickey Spillane plays his own creation, Mike Hammer, in The Girl Hunters (1963). As an actor, he’s a very successful writer.

For the kids: the animated Sabrina: Secrets of a Teenage Witch – Season 1.

Camp (2003), a comedy about a summer theater camp, introduced the multitalented Anna Kendrick to movie audiences. Her performance of “The Ladies Who Lunch” kills. Check it out below. PG-13.

Max is a family-friendly drama about a traumatized war dog adopted by a stateside family that helps him heal. PG.

The Ebola Trilogy features the documentary shorts Ebola: The Doctors’ Story, Orphans of Ebola and the Oscar-nominated Body Team 12. Not rated.

The Forger (2014) stars John Travolta as an art forger pulled back into crime by his father (Christopher Plummer) for one last score. R.

The documentary Afghan Star (2009), which won two awards at Sundance, is a look at one of the most popular TV shows in Afghanistan, an “American Idol”-like competition that challenged the once-restrictive customs of the country and won over the population in the process. No rated.