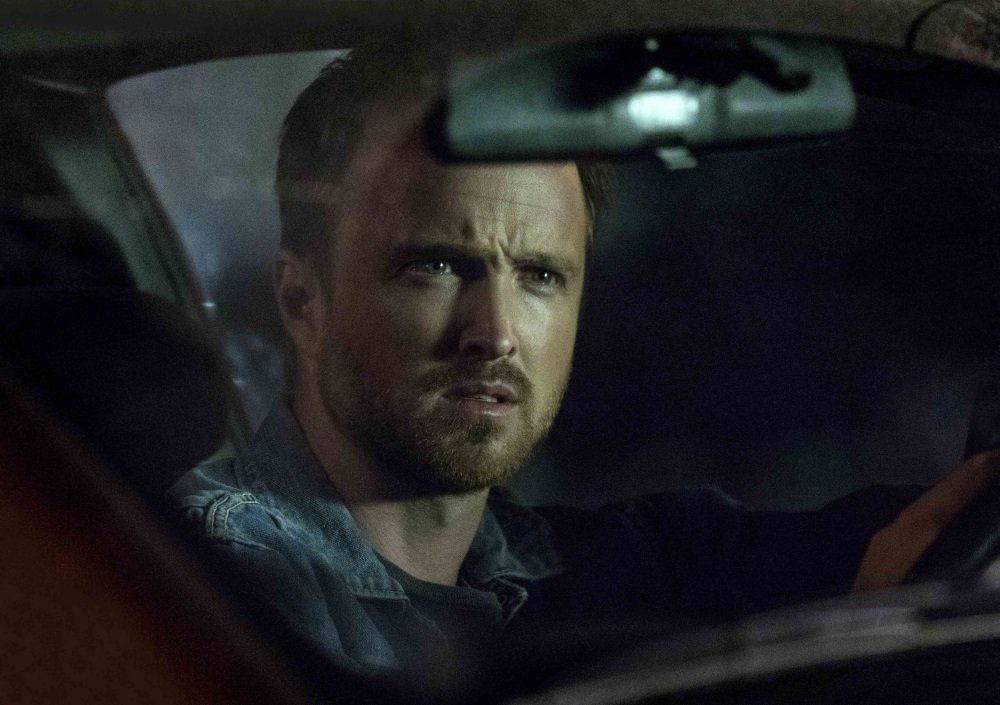 The new Hulu original series The Path stars Aaron Paul (Breaking Bad) as a man disillusioned with the cult-like religion, a small movement called Meyerism that has resemblances to Scientology, that has dominated his life and still has a hold over his wife (Michelle Monaghan), and Hugh Dancy (Hannibal) as a leader in the organization in a fight for more power. It’s the first continuing hour-long drama from Hulu (after successful comedies and a mini-series) and comes from playwright and TV vet Jessica Golberg and producer Jason Katims.

Slate TV critic Willa Paskin is impressed with the show in its initial episodes: “The Path is not a rollicking Scientology takedown but a more measured, slow-building dismantling of the insidious accommodations required to maintain absolute religious certainty.” The first two episodes are now available, new episodes arrive each Wednesday.

See it at Hulu.

Quentin Tarantino’s The Hateful Eight, an epic widescreen western in the intimate quarters of a stagecoach stopover during a blizzard, is filled with violence, cruelty, racism, and the storytelling verve and narrative twists that have made Tarantino’s reputation. Samuel L. Jackson and Walton Goggins stand out is a terrific cast that also includes Kurt Russell, Jenifer Jason Leigh, and Tim Roth. Rated R for violence, language, and nudity. Also on DVD and Blu-ray. Reviewed in Stream On Demand here.

Anomalisa uses stop-motion animation, a bleak sense of humor, and a rare condition to explore the misery of modern life and is the first R-rated film nominated for an Oscar for Best Animated Feature. David Thewlis and Jennifer Jason Leigh are the featured voices and Tom Noonan takes care of the rest of the characters. All of them. It’s unnerving. Features puppet nudity, sex, and adult language. Arrives months before disc.

Concussion stars Will Smith as the real-life forensic pathologist who discovered the life-threatening effects of repeated head trauma on professional football players and fought the NFL to act upon his findings. Gugu Mbatha-Raw, Alec Baldwin, and Albert Brooks co-star. PG-13. Also on DVD and Blu-ray.

Also new: the pointless remake of Point Break featuring a gang of extreme sports adrenaline junkies who rob banks for kicks (PG-13; available in 3D in select systems) and the thriller Exposed with Keanu Reeves (R).

Available same day as select theaters nationwide is Born to Be Blue, starring Ethan Hawke as jazz legend Chet Baker (R), plus the horror film The Girl in the Photographs with Katherine Isabelle and Kal Penn (R) and the drama Burning Bodhi with Kaley Cuoco and Virginia Madsen (R).

Ashton Kutcher and Danny Masterson, former besties on That 70s Show, are back together as estranged brothers who reunite to run the family ranch with their father (Sam Elliott) in the new Netflix original comedy series The Ranch, featuring Sam Elliott and Debra Winger. 10 episodes.

The Assassin (2015), which won the Best Director prize for Taiwanese filmmaker Hou Hsiou-Hsien at Cannes, is a martial arts drama abstracted into a flow of gentle, lovely moments punctuated by bursts of violence. In Mandarin with subtitles, not rated. Reviewed on Stream On Demand here.

Looking farther back to the golden age of Hollywood, there’s the Hollywood-noir classic Sunset Boulevard (1950) with William Holden and Gloria Swanson and Don’t Bother to Knock (1952) with Richard Widmark, Anne Bancroft, and Marilyn Monroe in an early role as a troubled babysitter.

The colorful and clever 21st century revival of the British time-travel adventure Doctor Who is streaming once again. Amazon has the first eight seasons. Who is your favorite Doctor: Christopher Eccleston, David Tennant, Matt Smith, or Peter Capaldi? Reviewed on Stream On Demand here.

From France comes the witty and tender The New Girlfriend (2016) with Romain Duris as young widower who escapes his depression by cross-dressing (R, French with subtitles). The latter is reviews on Stream on Demand here.

Also new: the cult comedy The Big Lebowski (1998) with Jeff Bridges and John Goodman (R); Tim Burton’s Batman (1989) with Michael Keaton and Jack Nicholson (PG-13); eighties comedies Risky Business (1983) with Tom Cruise and Ferris Bueller’s Day Off (1986) with Matthew Broderick; and the modern action classic Ronin (1998) with Robert DeNiro and some of the best car chases ever filmed (R).

Hometown pick: Seattle’s own Zombies of Mass Destruction (2009), produced locally and shot in Port Gamble by Washington-born filmmaker Kevin Hamedani. Full disclosure: I met the young filmmaker after I saw the film, which I found inventive and clever, and I now count him as a friend. New to Amazon Prime and Hulu. Rated R.

In addition to The Path, Hulu now has nine seasons of the animated Curious George, a favorite among young kids, while the raunchy spy spoof Archer: Season 6 offers animated fun for adults.

Carlos (2010), Olivier Assayass’ epic account of the life and myth of real-life terrorist Carlos the Jackal, is a mesmerizing portrait of committed activist who transforms himself into a media-hungry rock star of an international terrorist. It was released in two versions. Hulu features the shorter cut, which runs 165 minutes.

Ed Helms and Christina Applegate play the next generations of Griswolds in Vacation, part remake of and part sequel to the 1983 hit comedy. Chevy Chase and Beverly D’Angelo reprise their characters and Chris Hemsworth and Leslie Mann co-star. R.

The documentary Only the Dead See the End of War exams the moral consequences of war through the experiences of journalist Michael Ware’s experiences reporting on Iraq.

Available on Saturday, April 2 is the comedy Trainwreck, written by and starring Amy Schumer and directed by Judd Apatow. Unrated version.

Paddington (2014), based on the British storybooks of a gentle talking bear with a taste for marmalade, was a modest hit in the U.S. but a smash in Great Britain, where the books are beloved and the character practically a childhood institution. It is live action with Nicole Kidman doing villain duty and Paddington brought to life with CGI, and like the cuddly bear himself, it’s a gentle film with whimsical humor and a sweet disposition. The PG rating is for a spot of toilet humor (quite literally; Paddington has some trouble managing indoor plumbing).

We Go Way Back (2006), the debut feature from Seattle filmmaker Lynn Shelton, is available on the indie-oriented streaming service.

No Home Movie, the final film from the great Belgian filmmaker Chantal Akerman, pays tribute to her mother, a Polish immigrant and Auschwitz survivor who died in 2014.

The three-episode series Very British Problems sees some of Britain’s most famous faces sharing their struggles with the endless capacity for social awkwardness that comes with being British.